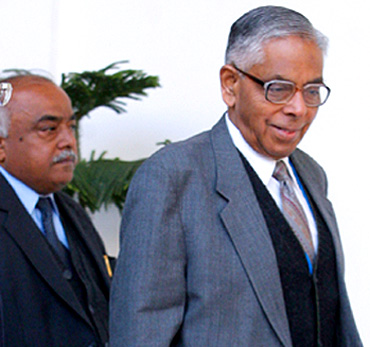 The irony couldn't have been more apparent. The government has finally ordered an investigation into the allegations of corruption in RAW made by Major General V.K. Singh (retd), an army officer who served with India's external intelligence agency. Singh's book, India's External Intelligence: Secrets of Research and Analysis Wing (RAW), published last year, detailed the charges he was levelling. The book's publication led to its author being investigated by the CBI under the Official Secrets Act (OSA) for "jeopardising national security". But even as the probe against Singh continues, the allegations he made are also being looked into (sources say they have been taken very seriously at the highest level). Thus, two investigations are now on simultaneously—one against the accuser (Singh) and the other against those accused by him!

Outlook has learnt that National Security Advisor M.K. Narayanan has taken the initiative in ordering the probe into Singh's allegations. G.B.S. Sidhu, a former special secretary with RAW, has been asked to look into the corruption charges. Sidhu, a China expert with vast field experience and several sensitive foreign postings including Tokyo, retired from service in 2001 after serving as RAW's second-in-command during the Kargil war. Sidhu's peers say he has a sharp eye for detail and is the right man to look into Singh's claims.

Sidhu will look into the following instances of corruption detailed in the book: While Sidhu will probe the corruption charges, RAW has decided to steer clear of the more controversial issues raised by Singh, such as RAW man Rabinder Singh's defection to the US in 2004. While an inquiry was ordered into his defection, the UPA government chose not to take any action against Amar Bhushan, then in charge of counter-intelligence. It also decided not to act against N.K. Sharma, the then director (security), who had been specifically asked to keep track of Rabinder Singh. Instead, Sharma was sent on a plum foreign posting soon after the embarrassing episode.

Strangely enough, while all this is on, the CBI is also trying to build a strong case against Singh. The CBI's Anti-Corruption Unit IX has been investigating Singh under the OSA, and has already questioned him twice. CBI sources said Singh has been questioned on several "sensitive" aspects in his book, like revealing the names of RAW officials, station codes, location of RAW stations in India, technical details of ongoing projects and the software used by RAW. Incidentally, most of this information is readily available on the internet.

Meanwhile, the internal lobbying within RAW has attracted even international media attention. The Washington correspondent of the Dubai-based Khaleej Times recently wrote a prominent article focusing on the divisions in RAW, and alleged that present chief Ashok Chaturvedi was pushing for Sanjiv Tripathi as his successor even though the latter is junior to several other officers. The article has come as a major embarrassment since it isn't often that the internal bickerings of an intelligence agency are picked up by the foreign press. More embarrassing for RAW, the write-up claimed that the agency failed to properly assess the imposition of martial law in Pakistan.

No time-frame has been set for Sidhu to complete the probe. Since it involves RAW, the findings may also never be made public. But the nsa and the prime minister will be given a detailed report. Sources say both of them are extremely upset with present chief Ashok Chaturvedi and the continuing decline of the intelligence agency. Perhaps all the flux of the last year may be for the best—the political leadership might decide to put in place a framework that makes the country's external intelligence agency accountable. Currently, it functions with complete autonomy—it is neither accountable to Parliament nor are its accounts subject to any audit.

The case against Singh continues, with the CBI pleading for an in-camera hearing. The agency fears an open trial will only expose the thin evidence it has against him. The travesty of it all is that the CBI case is based on Singh's book, which continues to do brisk sales.