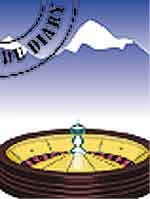 It's an immensely sad time to be leaving Nepal. For the first time in more than a decade of working abroad for the bbc, I leave a country in worse shape than I found it in. Now, I won't take the blame for that but things have worsened considerably on my watch. When I got to Kathmandu in August 2000, Nepal was still a democracy. A squabbling, fractious, corrupt democracy but a place nonetheless where citizens got to vote. Not now. For the moment, Nepal is a place where the king, the army and the royally handpicked try to run things and once proud political parties seem content to hold daily demonstrations and disparage the powers that be.

For most of my first year in Nepal, the country had a royal family and the king was a popular man. No longer. The infamous Royal Massacre of June 2001 robbed Nepal of a beloved king and most of his family. A man already none too popular, then Prince, now King Gyanendra, came to the throne amid tragedy and outrage and few beyond the royal sycophants would say that he has gained in public stature. Not that the King ought to shoulder all the blame. Nepal's politicians haven't done much for the place in my time and its Maoists have been singularly horrible—ravaging the populace, killing anyone who got in their way, forcing the security forces into a war they didn't want and smashing the infrastructure of local governments. I'm not optimistic for Nepal, not in the short-term. But time heals all wounds.