The BJP has argued that the Amit Shah tapes—which show the former Gujarat home minister in conversation with suspended IPS officer G.L. Singhal, ordering him to tail a young woman in 2009—were at the behest of her businessman-father, Pranlal Soni. And that this was done with the girl’s knowledge and was meant to provide security to the woman. However, as these transcripts culled from the 267 conversations submitted to the CBI and obtained by the investigative websites Cobrapost and Gulail show, the police had other intentions, primarily to not allow the subjects (including a male friend and IAS officer Pradeep Sharma) to “escape”. There are also many references to the girl’s family and intra-family matters in the conversations, which point to differences between them. Meetings with the Soni family were also under surveillance. Snatches from the taped conversations: 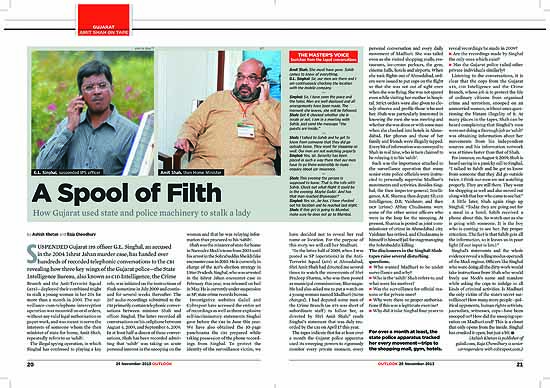 “The fact is that Saheb gets all the information, so the thing is that our loophopes might surface.”

Amit Shah: And the people with the placard....
G.L. Singhal: Yes sir, everything has been arranged.
Shah: No, no...I mean ask him in advance the hotel’s name.
Singhal: Yes, yes sir.
Shah: So in case she escapes, we can keep a vigil at the hotel.
Singhal: Right, right sir.

Amit Shah: Where is **** now ?
G.L. Singhal: She is there only. She has not moved yet...yes, sir.
Shah: Who is there has to be searched.
Singhal: The thing is that she came here to meet someone and it is heard that there is something pertaining to an engagement and for that she came to meet that boy.

Amit Shah: Are they talking in Gujarati?
G.L. Singhal: No, sir, in English.
Shah: And any talks with her family?
Singhal: She talked to her mother and she probably had some altercations with her sister. She told her mother...make her understand, I am going to meet that boy today or later, whatever it may be. I’ll let you know.
Shah: So her father and mother are not in the picture about her meeting with that boy?
Singhal: No sir, she talks very rudely with her mother. 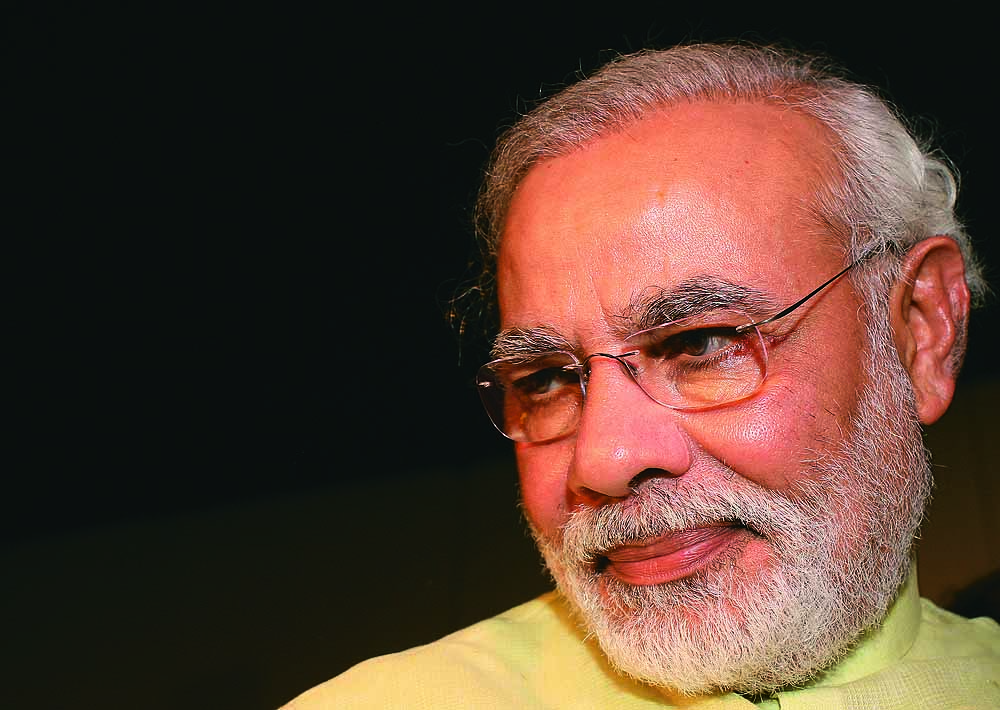 Amit Shah: So she has not stepped out with that boy?
G.L. Singhal: No, sir!
Shah: She must have gone. Saheb comes to know of everything.

Amit Shah: Both are there only?
G.L. Singhal: Yes sir, there itself.
Shah: Phone location is showing somewhere around Parimal Garden.
Singhal: No sir, I talked to Saheb.  According to that, they are still there.
Shah: Hmm. Alright, but they should not escape now any other way.
Singhal: Yes, sir.
Shah: Or in any car.
Singhal: Yes, sir.

Amit Shah: Singhal. Any updates?
G.L. Singhal: Sir, she has left the hotel and now she is going back towards Prahlad Nagar.
Shah: How are your relations with SP Bhavnagar?
Singhal: Good enough, sir!
Shah: Check whether the commissioner is at her home or would be coming here.
Singhal: Okay, sir. 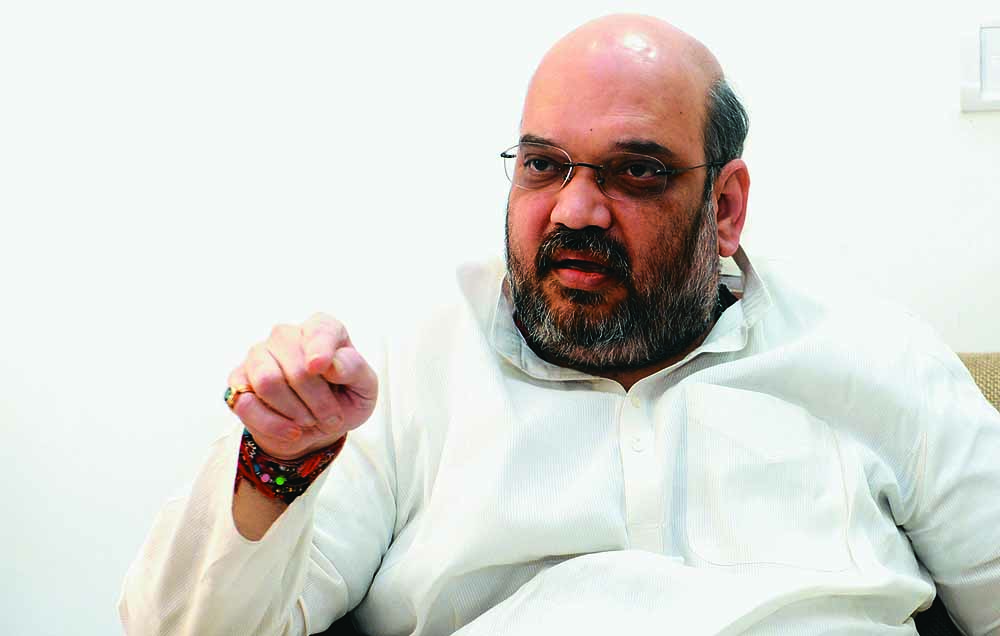 Amit Shah: And where is the lady?
G.L. Singhal: She is sitting at Navrangpura near Havmor.
Shah: With that boy only?
Singhal: Yes, sir. With that boy.
Shah: I want him in jail for as many days as Vanzara has been jailed for.
Singhal: Yes, yes.
Shah: You be courageous and strong.
Singhal: Undoubtedly, sir.
Shah: No matter how big the person, put him in jail.
Singhal: Right, sir.

G.L. Singhal: Sir, I have spoken to Sharma (IG intelligence A.K. Sharma) and he has asked for the latest location so that he can deploy his men there.
Amit Shah: Do that and pay full attention.
Singhal: Yes, of course sir...don’t worry about that. She will not escape.

Amit Shah: They have reached hospital, isn’t it?
G.L. Singhal: I will check it sir...our man is there at the hospital only.
Shah: Ask those who are following them whether they are there at the hospital?
Singhal: I will right away ask it.
Shah: They were about to go along with the brother and sister-in-law for lunch.
Singhal: Sure, sir...I will ask about it as well.
Shah: Please let me know after enquiring about both the places.

Amit Shah: Singhal, what’s the news?
G.L. Singhal: They have gone to Vishala  to have food.
Shah: Okay, okay...with the family?
Singhal: Yes sir, with family.

G.L. Singhal: Was seen with her bhabhi near Drive-in for shopping and now reached back.
Amit Shah: As such stays back at home only?
Singhal: Yes, mostly stays at home.
Shah: Okay...and that guy from Bhavanagar, his location?
Singhal: Sir...he is there in Bhavnagar only. 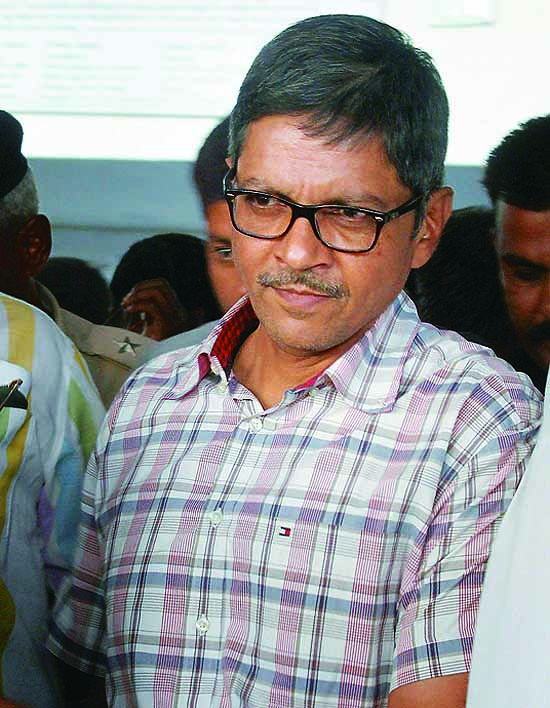 Amit Shah: Amit here...
G.L. Singhal: Sir...
Shah: Any further leads?
Singhal: No sir, I have told him, he will check and revert back.
Shah: No, because Saheb has been calling repeatedly.

Amit Shah: Singhal...
G.L. Singhal: Yes, sir.
Shah: Can we have somebody sent on the flight to Mumbai?
Singhal: Hmmm....
Shah: Saheb has solid information of some activity, so better put somebody on the flight.
Singhal: Yes sir...very well sir, I will send somebody.

G.L.Singhal: No information through that source but I have sent my inspector to watch and have arranged for the list for secret verification. That list will be available to me in two minutes.
Amit Shah: You will get it from Jet?
Singhal: Yes, sir.
Shah: That woman boarded the flight?
Singhal: Yes, sir, and the flight took off also. Our people would be there for an hour more as they might play any mischief and come out.
Shah: No phone call made as yet?
Singhal: No sir.

Straws In The Wind