Umpiring has never been better. It’s time we stopped carping so. 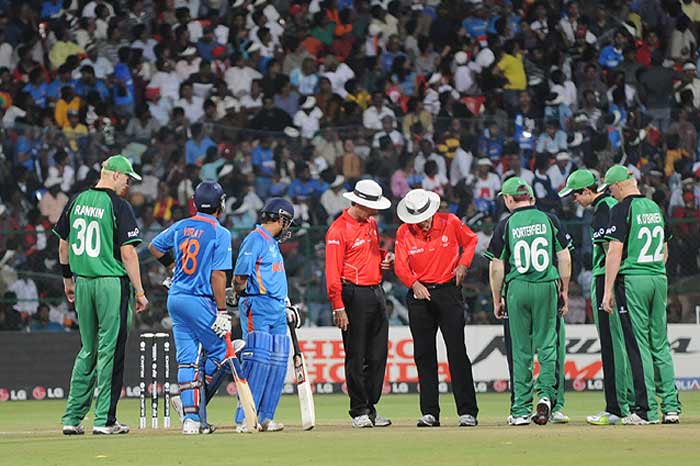 Here’s an important statistic for you. The percentage of correct decisions by umpires in this World Cup until March 14, without the use of technology, was 92.13. With the application of technology, invoked by teams under the Umpire Decision Review System (UDRS) put in place for the Cup, this figure rose to 98.15 per cent. Now, that is an impressive record!

Is it because this subject is simply good for the TRPs? Is it because the fans like nothing more than talking about umpiring fumbles? Are umpires the favourite whipping boys of cricket, because they, unlike players, have no way of getting back at the media?

For instance, excessive criticism of any Indian cricketer can be quite hazardous for a media outlet. That could well mean the end of any favours to the outlet from the cricketer. No more will it get exclusive quotes and interviews from the star cricketer that media outlets thrive upon. The cricketer, therefore, has great powers to fight back when in trouble. By comparison, the poor umpire is powerless! No one wants a Billy Doctrove exclusive, right?

It is almost sadistic what the Indian media does to an international umpire who is only trying to do his best—and that too in a very challenging environment.

In the past, umpires were human, so were cricket lovers. A bad shot, and a batsman stood no chance with them. Then came TV, and changed everything.

Mind you, I have not always been so sympathetic of umpires. There was a time in cricket when we as players thought that umpires had a great bargain for themselves. They came and stood like statues of authority in the match without a smile on their face. Talking to players, they thought, would diminish their status as ‘officials’. They were also very keen to exert their status and  powers on the players on the field. These umpires were never held accountable for their performances, like we players were. In those times a senior umpire could keep making ‘howlers’, match after match, and carry on like nothing had happened.

It was also the time when neutral umpires were not a part of international cricket as much as they are today. At times, players not only had to contend with incompetent umpires but also those who were extremely patriotic. Some countries in the cricketing world were especially infamous for this, and touring teams knew well before that they were playing against 13 players, not 11.

When you get a chance, do watch the Sharjah classics that are often shown on Ten Sports. Watch the kind of lbw decisions that were given then. There would be riots if any umpire were to give such decisions today. A beautiful yorker from the great Wasim Akram raps the batsman on the pads, the batsman is on the floor and the umpire raises the finger. The crowd erupts! Great, classic action from Sharjah, but there was just one thing that was not quite classical in that—the ball was missing the stumps by more than a foot!

Umpires were human then, and to an extent were cricket lovers too. If they saw a great ball and a bad shot from the batsman, he stood no chance with them! That finger of theirs was very happy to go skywards, it did not matter to them much where the ball was eventually headed to.

Then came television in its full technological glory, rapidly changing everything in the game. Especially umpiring, which just got better and better. The TV camera lenses got bigger and, sitting at home, we were brought closer to the action than ever before. New, ultra slow motion cameras that captured pictures at 1,000 frames per second replayed the action so slowly that you could finish a cup of tea while they showed a cover drive.

The game and the umpires came under intense scrutiny from the millions of visually empowered cricket fans and also from those connected with the game in some way. Considering the kind of scanner umpires are put under these days, I find it quite incredible that even without assistance from technology they are still able to have a 92 per cent success rate. Yet, somehow, we are still not satisfied.

Technology was brought into cricket and allowed to go deeper into its very fabric, more than it had in any other sport. With that, inevitably, also came some issues that had all of us stumped for a while, but these are also getting addressed along the way. In spite of all this and the 98.15 per cent correct decisions with technology, all it takes is just one umpiring mistake and we are up in arms once again.

For me, nothing is more ridiculous than the suggestion that an umpiring decision cost a team the match. We go on for days about how that one umpiring decision—for or against one batsman—cost us the game. You’d think that only one batsman bats in this game and not eleven.

If we chose to focus on the right things, we will find that it was actually how the players played that decided the game. In any lost match, the players have made far more mistakes than an umpire has, but somehow the umpire seems to bear the brunt. India tied the game against England not so much because Billy Bowden made an important mistake, but because India did not bowl as well as they should have. That also reminds me, we do have a weak bowling attack, don’t we? Couldn’t that have been more the reason for not winning against England, and not Billy boy?

We also have to remember that after a game is lost, the players too will sometimes attack an umpire on impulse if an important decision has gone against them. This is typical of us players; all of us have done this at some point of time in our careers as international cricketers. But to use the players’ reaction to further an agenda of your own is just not right and terribly unfair on the umpire.

I really feel that if we want to boast of being sports lovers, we need to be sports-minded ourselves. Show some of the sportsman’s spirit that players often show. Try raising the Billy Bowden issue with the Indian captain M.S. Dhoni today and he will brush it off as a non-issue. He has moved on; time for us to do the same.