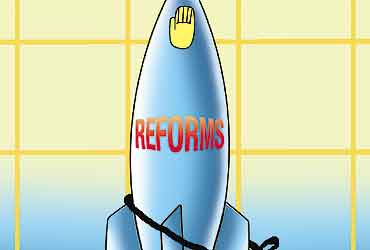 outlookindia.com
-0001-11-30T00:00:00+0553
In less than a week, India has been stunned twice: first by the election results that handed defeat to an extremely successful prime minister and then by Sonia Gandhi who, having toiled for six years to wrest the prime minister's position from A.B. Vajpayee, decided to step aside in favour of a citizen of Indian origin. While Sonia's critics were willing to divide the nation on the issue of her foreign origins, she herself was not.

Many commentators have described the NDA government's defeat as the rejection of the economic reforms. This is nonsense. The Congress had not only pioneered the reforms, it has also promised to carry them forward in its poll manifesto. To quote just two key sentences from the manifesto: "The Congress will broaden and deepen economic reforms. The overriding objective will be to attain and sustain year after year a 8-10 per cent rate of economic growth...."

Moreover, the results point to a strong anti-incumbency rather than anti-reform vote. Rajasthan, MP and Chhattisgarh, which had fallen from the Congress to the BJP in an anti-incumbency vote in December 2003, voted overwhelmingly for the BJP in the current parliamentary election. Andhra Pradesh handed a decisive defeat to BJP ally Naidu at the state level and also voted overwhelmingly for the Congress in the parliamentary elections. UP, which had handed a defeat to the BJP in the February 2002 state elections in favour of the SP and the BSP, stayed largely with these latter parties in the current election. Delhi, Assam, Jharkhand and Haryana voted almost entirely in favour of the Congress with no rural-urban split claimed by the proponents of theory that the vote was against the reforms.

The incoming government can be confident that people have not voted against reforms. Therefore, in setting the policy priorities, the issue is not whether people want reforms but what reforms can coalition politics accommodate. Even here, the Congress can take an aggressive stance—neither SP and BSP nor parties to the Left, CPI(M) and CPI, will want a return to the BJP. As such, through judicious negotiations—for example, offering the regional parties concessions at the state level—and brinkmanship, the Congress can keep moving forward.

The first task facing the government is to ensure that the disinvestment ministry is not scrapped. Even if the privatisation process eventually slows down—it should not—scrapping the disinvestment ministry will send a negative signal on the resolve of the government to move ahead with reforms. This fact has been amply demonstrated by the stockmarket reaction to the CPI(M)'s demands for scrapping the ministry and the relatively meek response by the Congress leadership. The Congress will need to be more forceful in arguing that even profitability of the state-run enterprises is an insufficient justification to keep them in the state sector—a 2 per cent return on investment is not the same thing as a 10 per cent return.

The Congress has promised during its campaign and in its manifesto to move the reforms into the area of agriculture. This has been long overdue and is to be welcomed. The critical question concerns what priority the government sets in this area. If it is serious, as it boosts public investment to improve the service in irrigation and power, it must also increase user charges. Else, given the large fiscal deficits that already exist, it will very quickly find itself seriously constrained by the Budget and fail to deliver on the promise altogether. Most farmers will prefer to pay and receive a decent service than not pay and receive a service that is delivered only in name.

But other agricultural reforms that give greater play to private initiative in agriculture are equally important. In particular, as promised in the manifesto, it must remove the controls on the free movement of farm commodities and regulations that depress the incomes of farmers. It must also provide an appropriate policy framework for the development of agro-processing industry. If the small-scale industries reservation is a constraint on such development, it should eliminate it. Above all, a major reform is awaiting the Food Corporation of India. Its storage facilities and the distribution system are a monument to inefficiency. Storage must be privatised and food subsidy given through food stamps to all those identified as being below poverty line.

But despite their popular appeal, the steps aimed at helping agriculture directly will not solve the long-term problem of poverty. Examples of countries that have shed poverty with a large proportion of the population making its living from farming are few and far between. The ultimate salvation from poverty will have to come from transforming India from a predominantly agricultural to predominantly industrial economy. This requires a massive expansion of the labour-intensive sectors and capturing the developed country markets from China and other labour-abundant countries. A key failure of the previous government was that it failed to create a healthy policy environment for the growth of the traditional industry. The reforms necessary for this—an end to the small-scale-industry reservation, balancing the rights and obligations of workers through the reform of the Industrial Disputes Act and related labour legislation, the introduction of a proper bankruptcy law and reduction of the fiscal deficit—have been well known. What is needed is action on them.

(The author is a professor at Columbia University.)