Lutyens' Delhi is under siege and no one cares. It's an unholy coup d'etat. 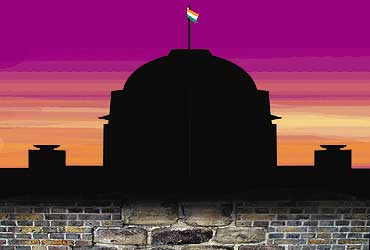 outlookindia.com
-0001-11-30T00:00:00+0553
I have lived for many years in Lutyens' Delhi, and for almost two decades worked within the one square kilometre of the capitol complex. Still, every time I go up Rajpath and see the great presidential palace, sometimes backed by dark clouds, at other times shimmering in the June heat; or while coming down Raisina Hill with the great arch of India Gate looming, I think of Lutyens and Baker with admiration. The great vista from Rashtrapati Bhavan, down to and through the India Gate arch to the Purana Qila ramparts, and on to the Yamuna, is unequalled.

Over the years, I have also seen the vandalisation of the fine architecture here. The buildings are choc-a-bloc with wooden partitions and cubicles, the quadrangles crammed with shabby PWD-built structures to accommodate the burgeoning babu brigade. Even the walls, with their finely cut rose Dholpur sandstone, have not been spared, most of them brutally forced to fit the ubiquitous, leaking cooler. In the last 70 years, there's been almost no maintenance of these heritage buildings, almost as if we take no pleasure in them. Even our great leaders seem to have walked down these corridors, decade after decade, unseeing.

I have had the good fortune to go to Rashtrapati Bhavan many times, driving through the Sunken Court past the Jaipur Column into the courtyard with the majestic Cobra fountain. As I walk up the grand staircase past Lutyens' modest bust, I salute and thank him silently. Once inside though, my spirits droop. The paint is peeling on the ceilings, much of the Lutyens-designed furniture has gone to the kabari, replaced by loads of shiny PWD kitsch. The curtains are a horror, the upholstery even worse. When I called on the President soon after he took over, I had requested that he order a comprehensive repair and maintenance plan for these grand buildings. After all, everything is over 70 years old, most of it original Lutyens-Baker designs. Maintenance work, if done, will have to be carefully supervised. I suggested that a selection be made from among the best Indian professionals to do the job, of course supervised by a carefully selected five-member panel. The budget, as befits the First Citizen's prestige, should be no consideration. The only plea I had was that the PWD be kept out of it. The President responded positively to my suggestions and I'm still hopeful that he'll persuade the Centre to attend to this urgent need.

Outside the presidential palace, I pass by the grand lawns with their jamun trees, blackened with age and pollution. Many have withered away, still others are on their last legs. Though some replacements have been planted, vandals treat them casually. The saplings face an uphill battle for, unlike in the West, they are not clipped to solid poles to ensure a straight bole. The trees in the rhombus around India Gate face similar poor prospects. New Delhi is under the control of a harassed home ministry, continually lurching from one crisis to another. Little surprise then that they can hardly spare a thought for nature or nurture. I also see that the lawns, lungs and playground for a crowded city of 15 million souls are being steadily eaten into by national termites—car parks, police posts, museum extensions, Metro needs, they have all encroached on to the greens. The mass tramplings of Republic Day have been of no help and, in fact, the Presidential salute area has now been permanently cemented. If the courts don't step in, we may be headed for complete disaster.

Lutyens' New Delhi was built in the '30s with just a few major buildings and great arterial roads. The valuable capitol complex land was still to be allocated for national buildings when World War II came. Much of the precious land was quickly given over to army barracks, to house army officers and offices. These barracks and messes were built cheaply, meant to be knocked down after the war. The British left in 1947 but New India continues to use them, even after half a century has passed. Forget aesthetics, they are a hazard to work and health. Defence ministry joint secretaries sit in filthy rooms, the files pile up in crowded corridors and the rats are everywhere. In the evenings, swarms of dengue-carrying mosquitoes descend. How can this proud country, after 60 years of freedom, tolerate this? Even more dangerous is the notion that this valuable land in the capitol complex belongs to the defence forces. They continue to build on it, though they have no authority to do so. This land must be allotted by the national cabinet—and after great consideration—to national priority institutions today, and fifty or a hundred years hence. The defence forces already hold far too much land—in the Delhi Cantonment area, around the airport, and elsewhere. Urban Arts Commission head Charles Correa and his team need to advise the government on this major policy issue before it is too late. Above all, India's vibrant civil society and the judiciary need to mull this issue immediately.