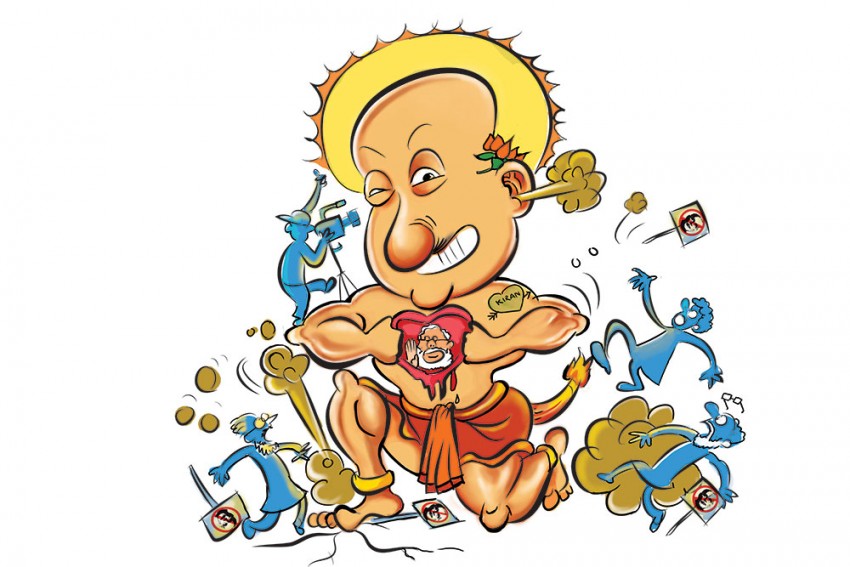 Illustration by Saahil
Anoo Bhuyan March 23, 2016 00:00 IST “Don’t Ask Me These Questions To Make Me Defensive About What I’m Feeling” 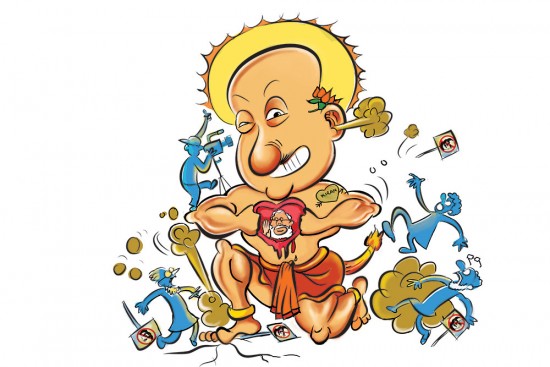 It’s difficult to speak to Anupam Kher; he is busy packing and taking calls. But as he gets ready to leave for the airport, the latest spokesperson of the nationalist brigade chats about his views. He explains his late and loud entry into politics and why he finds it easy to trust the current regime. Excerpts from his chat with Anoo Bhuyan:

How politically active were you in youth?

I was never interested in politics. I don’t think there was any burning reason to be political in the ’60s, ’70s or ’80s. The country had just only been independent for 15-20 years. The whole thing was about Saare jahan se achha, Hindustan hamara. I remember weeping when Nehru passed away.

At home too there were few political discussions. At that time everyone voted for the  Congress. There was, in effect, one party.

I recall how fourteen of us lived in one small room. But I did not lament, “Oh my god I’m a poor boy.” The idea of poverty can only take hold when you’ve had better times. Many books say that between the ages of two and eight, you become the person you’re meant to be. My life between two and eight must have been about what was right and what was wrong.

What explains your involvement with India Against Corruption, AAP and now BJP?

When I got a call from Manish Sisodia, I had been watching him on TV but had no idea who he and Kejriwal were. He wanted more people to come and add ‘star power’. I felt like I should go but then felt conflicted. Yet, the next day I came to Delhi. I researched the issues that bothered me. I was one of the few people who joined this movement from films. It was perfectly alright with me. I believed in this whole thing. Hazare was furious when they became a political party but I failed to see what was wrong in it. But the movement ended and it became a party and this ended my role. Then I started seeing a different side to the whole thing. I felt sad and disillusioned. It seemed like AAP had become like any other party. In fact, they became worse because they no longer talked consistently about honesty.

How did the turn to BJP come around for you and your wife Kirron Kher?

I started listening to Modi during the elections. Kirron used to watch the news and say, “Anupam, these BJP guys, I like what they say and how they say. I want to join BJP. I told her to go ahead, why not. So she formally joined BJP. I had nothing to do with it. There was no plan of joining active politics. No way. And she just wanted to join and go to forums and talk about things. Then she became an executive member of the party and that was it. Every day we used to talk—both of us being politically aware people. Our interest apart from cinema is also in what is happening in the country. Then I became a fan of Modi. I rem­ember thinking, “Wow what a speaker.” That’s how they came to power. After all,  282 seats is phenomenal.

Let’s not forget I am also a victim of ethnic cleansing. Through the experiences of grandparents, my uncles and the happenings in my home. So I’ve seen what intolerance is all about; it’s a first-hand account.

I think it was when this whole thing started on award wapasi—that’s when I started getting bothered about it. It clearly had some design. There were journalists involved in it. Why would people return awards and complain about intolerance? I genuinely believe our country is the most tolerant country in the world. Besides, what about the Emergency and 1984? The more the protesters evade those questions, the more I’m inclined to doubt their intent.

You are accusing sections of people for being anti-national but the Left accuses the Right of the same. When a Union minister makes inflammatory comments, how do you view that side of the argument?

The other side has every right to make their point. But it’s also good to remember that people from every party can utter rubbish. You’re talking about Dadri and some minister. But what about Malda? Don’t ask me this question to make me feel defensive about what I’m feeling.

People who are part of communal troubles should be condemned. Then again, didn’t we give Rajiv Gandhi a Bharat Ratna in spite of  his comments on 1984? I am being praised and criticised and so too are the people on the other side of the debate.

A Tricolour Twist In the 'Apolitical' Script