Done In By More Theatrics Than Action

Free water and cheap power can’t win you elections if the game of perceptions is lost. That could be AAP’s takeaway from its MCD debacle, but is the party willing to learn? 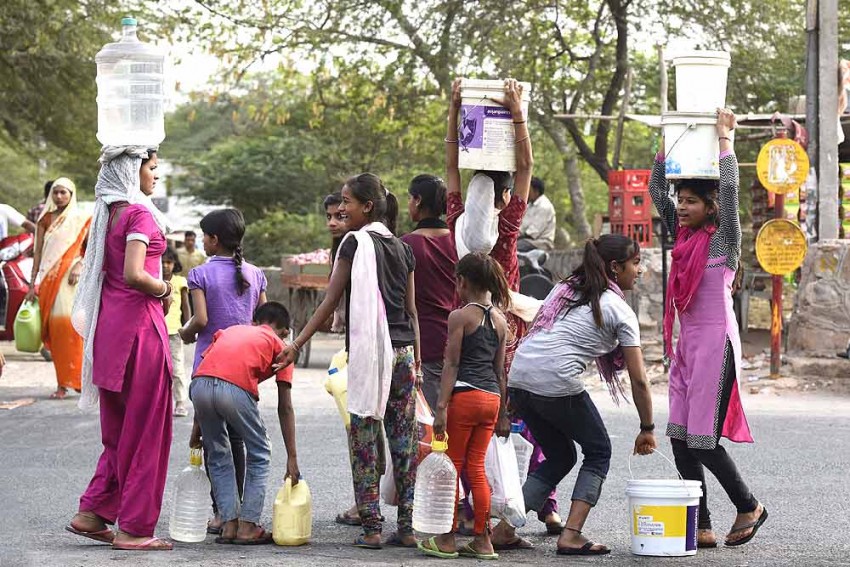 Just A Promise
AAP has failed to get rid of the ­water-tanker mafia that still makes a killing in many areas
Photograph by Getty Images
Lola Nayar April 28, 2017 00:00 IST Done In By More Theatrics Than Action 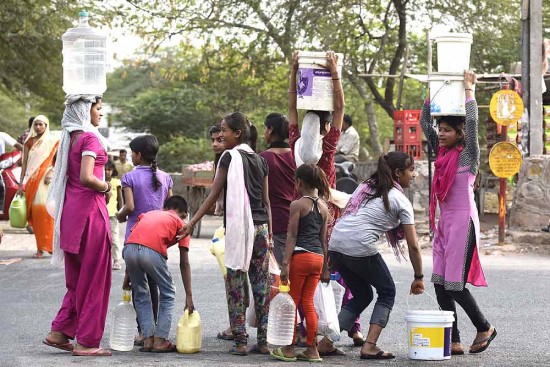 As Delhiites prepare to pay their house tax for 2017-18, not even the promise of its waiver could help Delhi CM Arvind Kejriwal lead the Aam Aadmi ­Party (AAP) to victory in the municipal corporation elections. AAP’s poor showing in the MCD elections has not come as a surprise to many, possibly not even to Kejriwal, who was unsure enough of the election outcome to make yet another freebie offer to voters.

Rightfully, given that Kejriwal’s party had swept the February 2015 Delhi assembly polls, winning 67 out of 70 seats with over 50 per cent voteshare, the AAP team should have been confident enough of ousting Bharatiya Janata Party (BJP) which has been at the helm of the mismanaged civic bodies in the capital for a decade. Ironically, in just over two years, AAP seems to have wasted its advantages with Kejriwal choosing to once again blame the electronic voting mac­hines (EVMs) and not read the telltale signs on the ground.

“AAP, which emerged as a TINA (there is no alternative) factor in the 2015 Delhi assembly elections, failed to realise it’s not enough for a party to win elections, it must also sustain the electoral victory with the same strength, trust and connect with the voters,” says Prof Sunil K Choudhary, director of Delhi University’s Developing Countries Research Centre (DCRC). “It failed on that count.”

In the MCD elections, AAP paid a price for ­having made people expect much more from it than it could deliver.

Ahead of the municipal corporation elections, DCRC had conducted a survey from April 14 to 21 with the help of students, scholars and faculty members in 272 municipal wards in the national capital. Choudhary claims the results of the psephological study titled Nigamiya Kampan (Municipal Quake) are in line with the election results. The survey had revealed that most voters are unhappy with the state government despite freebies. The exception was mostly in cluster or slum colonies such as Bawana, Jahangirpuri and Kalkaji, and some parts of East Delhi like Nandnagari and Sundarnagari.

As a political party that emerged from a social movement against corruption and poor governance, AAP had caught the imagination of the youth with its promise of accountability and greater people’s participation in governance, besides imp­rovement in civic amenities and greater focus on education, health facilities and public safety. While it delivered on the promises of free water to the poor and lower power bills for most households, it failed to meet many other expectations it had raised among various sections of Delhi’s voters.

“There is disappointment among the middle and upper-middle classes due to lack of attention to authorised colonies,” says Ashutosh Dikshit, CEO of United Residents Joint Action (URJA), a body representing all the RWAs (Residents Welfare Associations) in Delhi. “The AAP government has not done well in terms of road repairs, laying down footpaths and so on. The story is a little better in the unauthorised colonies, with some work done on water supply, power supply, setting up of mohalla clinics and so on. Though they are not up to the mark, the mohalla clinics do offer some succour in the absence of primary health centres.” 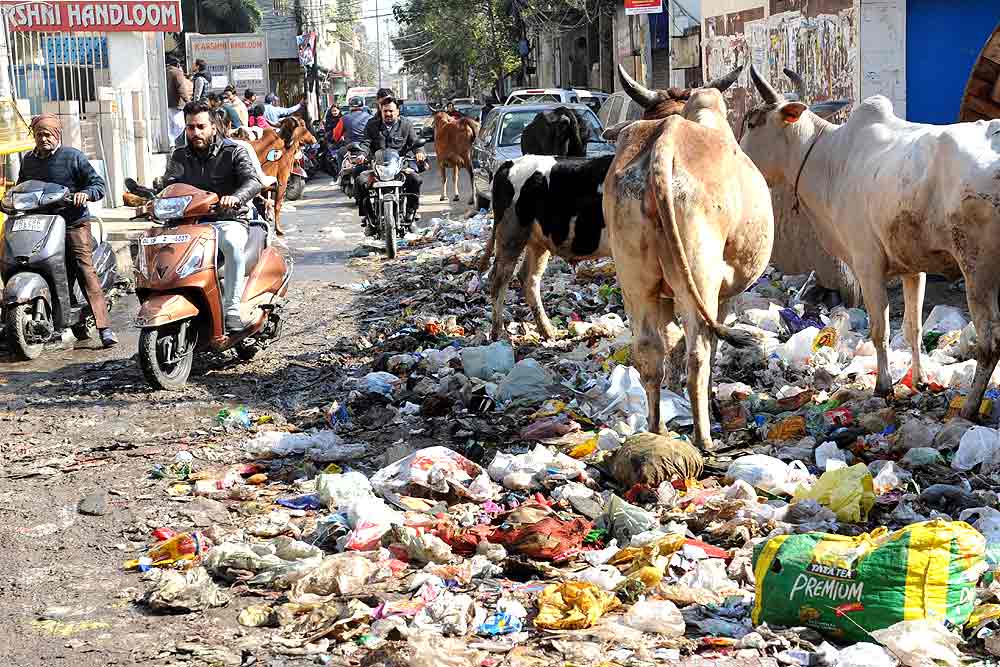 Gone To The Cows

Garbage in the streets, a common sight, is always negative PR for governments during polls

Education is another area where AAP has done some work to upgrade facilities and improve learning outcomes. The attempt to get parents more involved in the education of students in government schools through parent-teacher meetings has been welcomed by many. “But the general condition of most government schools remains below expectations,” says Rajesh Agarwal, an URJA member representing Shahdara, Jhilmil, Vivek Vihar and Dilshad Colony of East Delhi.

Shahdara is represented by AAP MLA Ram Niwas Goel, who is speaker in the Delhi Assembly—and yet, points out Agar­wal, nothing has been done to deal with overflowing and eroded sewerage lines in these areas. So the problem of contaminated water leaking into water pipelines supplying homes remains unaddressed. “The pipelines are not maintained properly. The Delhi government is responsible for both the sewerage lines and the potable water supply under the Delhi Jal Board. There seems to be no plan to replace broken or eroded pipelines. Though we don’t have to pay for water, it is dirty and stinks. So people in our area still have to buy filtered water,” says Agarwal, adding that even the mohalla clinic near the main road in Jhilmil isn’t of much use as it is too far for most residents and there is no proper arrangement for its functioning.

The situation is no different in and around Ashok Vihar in West Delhi. Here too residents have to buy filtered water cans for daily use. Dr H.C. Gupta, a medical practitioner from Ashok Vihar, narrates how the RWAs in their area were forced to seek court intervention when AAP MLA Rajesh Gupta arb­itrarily decided to build a public toilet complex on a green belt in Ashok Vihar Phase-1, near a planned colony, instead of at Shahid Sukhdev Nagar, adjacent to the slum colony in Wazirpur Industrial Area, where the DDA had allocated the land. “The MLA’s highhanded tactics, favouring slum-dwellers over authorised colony dwellers, backfired as even the slum-dwellers were upset. To use the toilets, they would need to cross the railway tracks, which is both dangerous and illegal. After the court order, the toilet block is due to be demolished. Even the slum-dwellers realise it is a sheer waste of public money,” says Dr Gupta, who also heads the Federation of Ashok Vihar RWAs, comprising 45 RWAs.

Admitting that the AAP government has helped to improve the water supply in what is the biggest unauthorised colony in the capital by linking it up with Delhi Jal Board’s main water pipeline, Tahir Ali, president of Sangam Vihar and Deoli RWA, says it failed, however, to put the water mafia out of business. “The mafia is still going strong with around 50 per cent of the people here having to pay steep charges for supplies from tankers and private pipelines,” he says. “If the CM had done a survey, he would have realised where his government has fallen short of expectations. Water, sanitation, cleanliness are major issues in our area. There is no proper sewerage system, the gutters are clogged and the roads are filthy.”

Bijendra, a painter who takes up contract works around the city, attributes much of the anger against AAP to MLAs who became inaccessible, unlike many leaders from other parties. Some of this could well be because the MLA might have been roped into AAP’s poll campaigns in Goa, Gujarat or Punjab.

In fact, Bijendra is unable to recall the AAP MLA he had voted for in 2015 but has no difficulty recalling the names of the Congress and BJP leaders in his slum colony in Dwarka “as they are always ready to help. They have helped to build roads and provide piped water in our area”.

Rajiv Kakria, a marketing and advertising professional and civic activist, says the dip in AAP’s support has less to do with people’s disappointment with its work than a “personality ­issue”—a constant accusation mode and not getting into pre-emptive strike. “AAP is losing the perception game, with a growing impression that its leaders would do anything to grab power,” he says. “It used to have mohalla sabhas and encouraged public interaction in its first year, but has been mostly missing since—with its leaders busy campaigning in other states.”

The fact that Kejriwal is still the face of AAP has also worked against the party, claim activists, who point out that many in his team like Manish Sisodia have done a lot of good work, but the chief minister has ensured that he alone remains in focus.

“Two other spoilers for AAP in the municipal elections were the delimitation of wards by Kej­riwal, which worked against both Congress and AAP, and a not-very-upfront candidate-selection process,” says Kakria. “The candidate selection process left many people unhappy. This also happens in the Congress and the BJP, but the fact that the disease spread so fast in a newbie party intrigues me.”

Political analyst Sudha Pai says the reason lies in AAP’s failure to bring in the big changes it had promised—tackling pollution, improvement in education and health infrastructure, creation of jobs, transparent governance, greater people’s participation, zero tolerance for corruption and so on.

“AAP had a chance, but frittered it away with its theatrics,” says Pai. “It could have done much in the space it had, just like Sheila Dikshit had done, and carried forward the work of imp­roving the capital’s infrastructure. Instead, AAP got into a blame game that worked against it.”

“AAP could have done solid work in the space it had, but got into a blame game ­instead,” says political analyst Sudha Pai.

As the AAP government nears the midway mark in their five-year tenure, it has an uphill task ahead to rebuild its image of a corruption-free government that is able to deliver despite all odds. Among the unfulfilled promises are regularisation of jobs, particularly of teachers in government schools, making government schools match private schools in terms of standards of teaching and other facilities, improving services in government hospitals, overhauling sanitation and other civic infrastructure—and not just regularisation of unplanned colonies, but also upgrading roads and other infrastructure, besides improving government services.

“AAP was so far seen only castigating the Modi government without doing any substantial work that it could have claimed to its credit,” says Prof Choudhury. “They had started losing the connect with the young voters, who had supported it on the plank of governance. It had promised free WiFi, which has not materialised so far.”

The AAP still has 34 months before it has to face assembly polls in Delhi. It is time enough for it to correct its stance and set right the perception with the people—not just in Delhi but also beyond it—to deliver on its promise to raise the bar of politics and shed its negativity that seems to thrive on a spirit of vengeance and reaction. It is indeed time for some action, not theatrics.

‘I Won Because I Keep My Doors Open To Everybody’