With rudeness, low cunning and barefaced dishonesty, Trump plays to an idiot’s gallery where climate change, or terror, are just board games 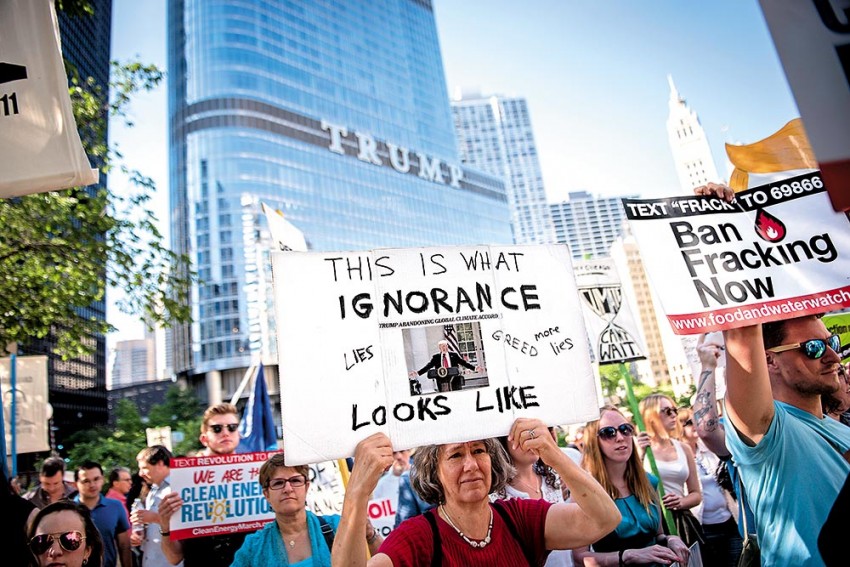 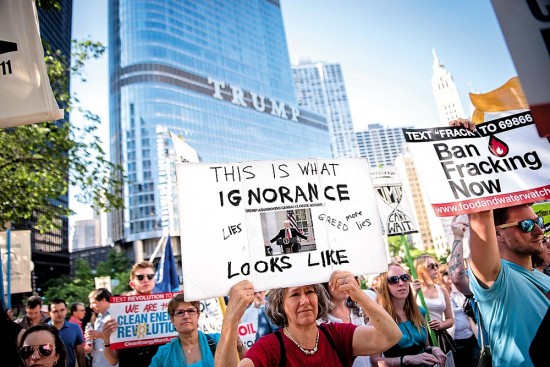 Will Trump’s legacy lie in his small hands, big mouth, and America’s yuuuge carbon footprint? The joke of the week is, “So Trump pulled out of the Paris Climate Accord? Too bad his dad didn’t pull out first.” And look who’s suddenly back from the doghouse, where rottweilers go after they nip safed ghar ka daamaad Jared in the ankle—Steve Bannon, a man who has never let concerns for the environment get in the way of some acquisitive materialism. The climate has definitely changed for the better for this scruffy-looking shadow power.

People were not happy, needless to say. UN ambassador Nikki Haley has flapped about a bit, trying to course-correct; Google chief Sundar Pichai has said he is ‘disappointed’, and Tesla’s Elon Musk has exi­ted Trump’s advisory council, possibly in a neat red Tesla. I must say I’m surprised by everyone’s tears of disillusionment at seeing Trump’s pugnacious ora­nge face on the anti-green bully pulpit. Do you not know the POTUS? You just need to scroll through those 115 Trump tweets dripping with climate change denialism that go back many years. Maya Angelou said, “When someone shows you who they are, believe them the first time”.

But there’s a silver lining in all this polluted cloud cover. When Trump grandly announced that he “was elected to represent the citizens of Pittsburgh, not Paris”, Peduto, mayor of that Democratic stro­nghold, shot back, “For him to use Pittsburgh as the example, I can only say that it was a far stretch at best”. And then he proceeded to honour the Paris accord. Peduta is not the only one; in all, 211 mayors (representing 54 million Americans) and 10 governors from all over the US have joined hands almost overnight to do the same, solemnly promising to meet the 1.5 degrees Celsius target and work tog­ether to create a 21st century clean energy economy. Big businesses will not slide back in India or in America, given solar energy’s sustainable costs. As Obama has indicated, the private sector has already chosen the path of high tech, low carbon. By the time anyone slides out of the things already set in motion, Trump’s term will be over.

Trump confuses the weather with climate (‘It’s freezing, therefore global warming is a hoax’). We should not confuse his low native cunning with high wisdom. Cynical local populism is not global savvy. Understanding statecraft has nothing to do with wooing his narrow-minded party base; as he knows well, manufacturing on coal is history.

One theory is that Trump’s tweets are planned to distract us from real stuff. I call BS on that.

Trump has still not attempted to fill even five per cent of the 559 key executive branch posts lying vacant. (Bush filled that amount in 11 days.) Yet, he has time to surf channels on his big screen TV in his dining room, and to fly off every weekend to play golf at his Mar a Lago resort—which, by the way, has developed a sinkhole. So much for campaign promises to “drain the swamp”.

Experts spend hours analysing his moves. One popular theory is that his outrageous tweets are str­a­tegically planned to distract us from real stuff he doesn’t want us to notice—executive orders etc. I call BS on that. He has the attention span of a gnat and the ego of an alpha chimp. In the last few trips, he has he wandered off on stage in the middle of a meeting with Netanyahu, shoved off the Mont­ene­gran PM, and pummelled every premier he has met with his bone-crushing clasp-yank-release handshakes that try to pull them into his space. When it didn’t work with Trudeau or Macron, it caused comment.

European leaders trolled him this week by posing with their hands around a soccer ball to mimic his photo-op with the Saudis with their hands around a mysterious, glowing orb. He is the first POTUS to be parodied with such ease on late night shows, memes, and social media chats and snapped at by other lea­ders. But then, we never had one before that was a lying narcissist and a boor. He just can’t stop himself from throwing daily unpresidential public tantrums online or rambling with a 5-year-old’s vocabulary, as his handlers try to pry the cell-phone off his short, grasping fingers.

An Indian-American may have just won the prestigious US national spelling bee for the ninth year in a row, but the real bee is still in Trump’s bonnet—his gibberish word, ‘covfefe’, from a rec­ently garbled tweet, has yet to be decoded. Ananya Vijay, the new bee champion, was jokingly asked on TV to spell Trump’s brain-fart ‘covfefe’ that went viral. A flaky CNN host made the tone-deaf comment that Ananya (being Indian) must be “used to using” Sanskrit. This has sparked a small row on racism. Meanwhile, far more violent attacks are made here and there, often in Trump’s name.

A bigger war of words erupted when our delusional tweeter-in-chief struck a bellicose note after Saturday’s London blasts, so soon after Manchester. Trump used the tragedy in the most cold-blooded, clod-footed way possible. He retweeted an unverified Drudge headline, ranted against Muslims, and reopened the gun rights debate (because, you know, knives were used). And then he twisted out of context the words of the popular, hard-working London mayor, Sadiq Khan, who happens to be a Brit Pakistani. Sadiq’s spokesmen responded. Trump doubled down and called it a “pathetic excuse”. This carried on back and forth.

The children’s writer, J.K. Rowling, stepped in to school him: “It’s called ‘leadership’, Donald. The terrorists were dead 8 minutes after police got the call. If we need an alarmist blowhard, we’ll call.” The US acting ambassador’s tweets did some damage control. But then Trump, in an interview with Piers Morgan, challenged Sadiq to an IQ test. Sadiq has since asked the British PM, Theresa May, to cancel Trump’s impending state visit to the UK. Failing that, J.K. Rowling has suggested they all put up enlarged images of Trump’s earlier tweets to expose the hypocrisy of whatever lip-service he pays to them. Anti-Trump sentiment is running high in the UK right now.

Again, I don’t understand the gasps of horror. Do we not know by now he is a sociopath? It’s not as though Trump has not used catastrophe for provocation or publicity ever before. After the 9/11 att­acks wiped out the World Trade Center and killed lives, Trump responded with typical lack of empathy or dignity, crowing that he had the tallest building in downtown Manhattan.

Let’s just say if you’re in trouble, Trump has the worst bedside manner on the planet. Unless you’re a pretty female. Or maybe that’s worse.

Trump has isolated the US yet again by his statements and his actions. He was nice to Qatar one minute, took sides with the Saudis in their internecine squabble the next. This past week, he forfeited opportunities for bipartisanship twice. Once on trade, with his primetime NATO sulk, going off script and refusing to honour Article 5. (He complained about the US pulling too much weight, though the ‘one for all, all for one’ promise for solidarity was used most to the US’s benefit, during 9/11.) And once on counter-terrorism, with his nasty London tweet-storm—using the unconstitutional ‘travel ban’ for Muslims again, which will lead to awkward legal ramifications. He knew this, but he doubled back down on tweets against the DOJ and the ‘watered down’ travel ban. In all these acts, he has blindsided his advisors and left them scrambling to put a spin on things. Now it seems Attorney General Jeff Sessions may go the way of Paul Manafort or former National Security adviser, Michael Flynn, or former FBI director, James Comey, all of whom were buddy-buddy bef­ore being abruptly flung out.

And as for Comey, Trump bragged to visiting top Russian officials about firing the ‘nut-job’ (a word translators have had a terrible time cracking). Think about that for a minute. Trump called someone else a nut-job.

Playing It Again With Sam