Lure of megabucks string together a deal, but ethnic schisms continue 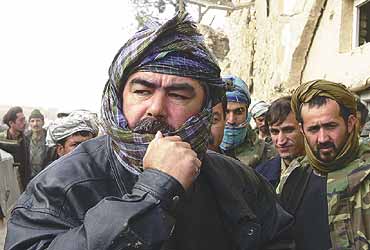 outlookindia.com
-0001-11-30T00:00:00+0553
The most encouraging news for the interim administration for Afghanistan last week was the decision of the Afghan Support Group, comprising 15 donor states, to commit millions of dollars for the reconstruction of their war-ravaged country. It was estimated that Afghanistan needs $600 million from March and a whopping $10 billion over the next decade. Megabucks could well be the glue to hold the interim administration together, rocked as it is by mutual recriminations and boycott threats.

The lure of money was in fact the decisive factor in hammering out an agreement. As the Bonn conference threatened to end in a stalemate, UN officials had to intermittently remind the delegates that funds wouldn't be committed until they reached a consensus over the interim administration.

After nine days of tortuous negotiations, the group initialled an agreement—a 30-member cabinet will rule Afghanistan for six months, beginning December 22, 2001, till a Loya Jirga (traditional council) is held to establish an interim government for another two years before elections are held. The interim cabinet is to be headed by Pashtoon leader Syed Hamid Karzai.

The Northern Alliance (NA) and the Rome delegation of former King Zahir Shah corner all posts in the cabinet—the ethnic breakup shows there are 11 Pashtoons, eight Tajiks, five Shi'ite Hazaras and three Uzbeks. The NA, understandably, has 17 members, including three vice-chairmen out of a total five. "It does have the power to vote against any move," said an observer.

But even before the ink could dry on the agreement, dissenting voices began to surface. Uzbek warlord Abdul Rashid Dostum declared he would boycott the administration, complaining against the Tajik domination. Also, Dostum reportedly coveted foreign affairs, a post NA's Abdullah Abdullah retained. More importantly, the ground realities have influenced his opposition—he has pulled out his troops from Kunduz fearing attacks from Tajik forces, and even in Mazar-e-Sharif he had to share power with the Tajiks and Hazaras. Temporarily, though, the US is expected to compel him to fall in line.

Similarly, the Cyprus group, under instructions from Gulbuddin Hekmatyar, has opted out, though it still backs the agreement. And there are many observers who are reluctant to count the Pashtoons in the Rome delegation as Pashtoon because some of them only speak Dari. In fact, the Nangarhar province governor, Haji Abdul Qadir, walked out saying the delegates were conducting negotiations in Dari. The UN special envoy on Afghanistan, Lakhdar Brahimi, later explained what the problem was: "No ethnic group is happy because there are no precise statistics and every group thinks they are much more numerous than what everybody else thinks."

But what's interesting are the reasons why Karzai, an urbane tribal chief from the south, was unexpectedly catapulted to head the interim administration. Zahir Shah preferred his former justice minister Abdul Sattar Seerat, an ethnic Uzbek, to refute the impression that he represented only the Pashtoons and lacked support among ethnic minorities. The NA was reluctant to concede this right to the former king, claiming as it does to speak for all ethnic minorities.

The NA and the US also favoured Karzai because he belongs to the Taliban stronghold of Kandahar, and could consequently succeed in weaning away Mullah Omar's supporters and garner support for Zahir Shah. Both Karzai and Shah are Durrani Pashtoons, who dominate Kandahar and other southwestern provinces where the Taliban enjoyed the strongest backing. This has been one of the important factors in the surrender of Kandahar.

What is more worrying than the schism between Pashtoons and non-Pashtoons are the cracks in the NA itself. Apart from Dostum and Haji Qadir, a Pashtoon leader, the Hazaras favoured equal representation among all ethnic groups. More significantly, others in the NA resent the domination of the Tajik triumvirate of Abdullah Abdullah, Yunus Qanooni and Mohammad Fahim, who have between them cornered the three important posts of foreign affairs, internal security and defence.

The emergence of these three Young Turks has also sidelined Burhanuddin Rabbani. His only gain from the Bonn conference was a sentence in the agreement that expressed deep appreciation "for his readiness to transfer power to an interim authority". Karzai may be the presentable face of the interim administration, but these three will call the shots in Kabul.

Nandini Basu Bandopadhyay in Bonn and Behroz Khan in Peshawar

Rogues In The Well