Amidst the wheat fields, the bound and pace and stride of greyhounds feeds a racing craze 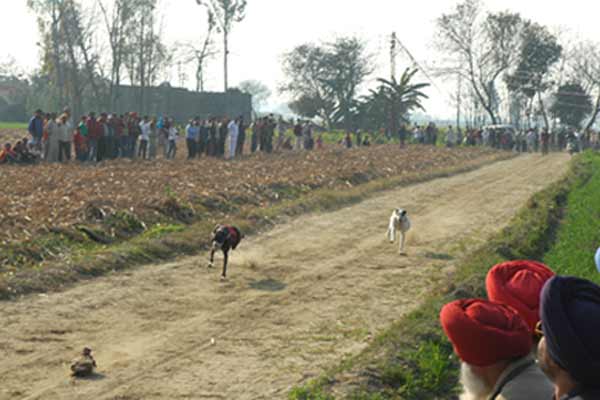 The winter wheat across rural Punjab is a blur of green, the tender shoots rising fast to meet the mild sunshine. Not high enough yet to hide a dog, or even a hare. A fine time, many would say, for racing dogs. And an even better time to hunt with them. What about the ban? Well, for the avid shikari, the ban on hunting has only inspired ways to get around it. Enter the dogs—greyhounds, if you please.

But racing first, because, after all, it is legal. This winter, Punjab’s rural calendar is chock-a-block with greyhound racing events, a race taking place every few days in one village or the other. It’s a sport that has gained currency over the last 15 years or so. After all, with the rifles of the shikaris silenced by the ban, their retrieving dogs, reared with so much passion, had to be kept busy. About 500 greyhound races take place in Punjab every winter, and the craze is growing with every season. So is the prize money for the winner, which ranges from Rs 11,000 to Rs 1 lakh. Each race is like a carnival, with the villagers chipping in not just for the prize money, but also for pakodas, chai and hearty Punjabi meals. But for some of the female contestants on the track, it would be an all-male carnival.

Paramjit Singh Hundal is the quintessential Punjabi nri. Nothing can keep this owner of a flourishing textile business in Germany away from his native village, Kotli Raiyyan in Hoshiarpur district, during the winter months. Apart from good food and convivial company, the big draw for Hundal is the annual greyhound race he organises here in memory of his father. “In 1947, when we fled Pakistan and came to India, we left behind all possessions except our dogs. My father was so attached to them that he couldn’t bear to part with them. So when he died, I decided to organise this competition as a tribute to his passion,” he says, in between a couple of races at Kotli. As the event ends, he goes into celebration mode—his prize greyhound, Atom, a powerful creature with rippling muscles, imported from Germany for 2,000 euros, is the winner!

Half a kilo each of meat and curds, four eggs, 200 gms of dog food—that’s the daily diet of champs-in-training.

For other punters, it’s hard business rather than sentiment that is the pulling force. Deepinder Singh Rikhi, originally from Jalandhar, is a truck driver in the US. “Each year, I bring four or five prize greyhounds from the US and sell them here,” he says. A greyhound with a good bloodline sells for Rs 3 lakh to 4 lakh, and once a dog has won a race, its pups are in great demand. For Deepinder and many nris like him, importing hounds helps pay for the winter holiday in Punjab. Since these ‘businessmen’ are also keen participants in the races, there is invariably a big nri presence at these affairs. Sukhbir Singh, an avid dog racer, says, “Each year, some 50 dogs are imported to Punjab from countries like the UK, US, Canada and Germany.” Their owners pamper them like children, feeding them a high-protein diet that typically consists of half a kilo of meat, 200 gms of high quality animal feed, half a kilo of curds and four eggs daily.

But what do the dogs do the rest of the year, once the racing season is over? Simple, they train to run faster and faster. And here lies the story that dog racers don’t like to talk about.

“The dogs are almost always trained on live hare in the countryside,” says Sukhdeep Singh Bajwa, a farmer who formerly served as a honorary wildlife warden in Gurdaspur. “Each training session usually ends with the unfortunate hare being divided up between the dogs and the trainers.”

At the races, a decoy hare attached to the end of a wire is used to get the dogs running on the 100-metre track. The decoy gets the hounds gnashing their teeth and straining at their leashes. As the hounds chase it, a winch winds up the wire, drawing the decoy swiftly to the finishing line, and with it, the contestants. Often there is high drama, with the pair on the track (only two dogs run at a time) getting at each other’s throats—so frustrated are they at not having caught the ‘hare’. Last year, one of Hundal’s dogs died during training when it over-exerted itself while chasing a particularly swift hare.

Killing wild hare, as indeed almost every wild animal, is illegal. But it’s rampant across Punjab, says Bajwa. “It is very common to see groups of village boys and their dogs chasing hare in the countryside in the afternoon,” he says. The training is usually done after the kharif harvest of paddy, when the fields are fallow, or in open scrub country.

It’s not just well-off farmers who rear greyhounds. Even middling farmers with 15 to 20 acres like the cachet that having a greyhound or two tied in their courtyards brings. These are often not the expensive imported variety but humbler strains, which the farmers like to use for both racing and hunting.

“Gunshots attract attention, so people are increasingly using dogs to hunt for them,” says Bajwa. The dogs chase, attack and kill the animal quietly and unobtrusively in the forest. From retriever to hunter, the shikari’s best friend has taken on the role his master has defined. And every winter he—or she—runs as well, to the sound of cheers, claps and shouts of encouragement.

The Karma Symphony In Judea