'Does Yediyurappa Even Have A Vision?'

On the campaign trail, former Karnataka chief minister does not hold back the punches 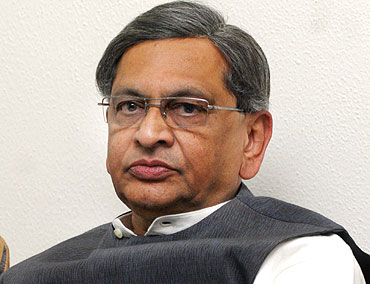 On the campaign trail, former Karnataka chief minister S.M. Krishna does not hold back the punches he directs at his own party and the BJP. He spoke to Outlook. Excerpts:

Considering the chaos that occurred during the 2008 assembly elections, do you think the Congress in the state is better organised now?

Perhaps. The presumption is that it is better organised.

Weren’t you keen to contest the Bangalore South seat?

It is the other way round. I was not keen but there was a lot of pressure from various groups of people. People said they wanted an opportunity to say thank you to me. I thought it would be a good idea to contest, but then....

Most senior state Congress leaders are in the fray this time. How will they fare?

I want the Congress party to reflect the aspirations of the workers. Right now, I’m afraid, I cannot say with a sense of credibility that Congress leaders do represent workers’ aspirations. In a constituency, if the workers’ preference is for a particular candidate, there is no...