"Does China Have Problems With Funds From Capitalist Countries?"

Are the Communists in India changing colour? The West Bengal CM explains why there is no dichotomy between his position and his party's. 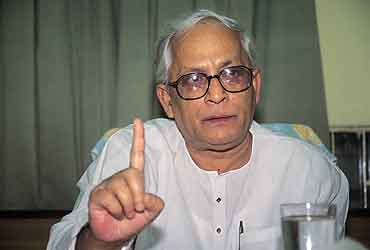 outlookindia.com
-0001-11-30T00:00:00+0553
Are the Communists in India changing colour? Many would nod yes, going by what West Bengal CM Buddhadeb Bhattacharya had to say last fortnight about FDI, economic reforms and globalisation. But in this interview to Jaideep Mazumdar, Bhattacharya explains there is no dichotomy between his position and his party's. Excerpts:

Your statements in Singapore and Jakarta have created the impression that your agenda for West Bengal's development is different from the CPI(M)'s economic policies.
Not at all. I never said anything new or different. I spoke of the need to attract foreign investments. But we, the CPI(M) and the Left parties, have our own criteria on this. We're not in favour of allowing FDIs in all sectors.

What are these criteria?
There are three. One, there has to be transfer of technology. Second, the project has to ensure development of productive forces and third, it should not be against local industry's or the local economy's interests. If these criteria are fulfilled, the people will benefit from FDI. I welcome foreigners and MNCs to invest in Bengal and when they send us their proposals, these criteria are strictly applied before we give the green signal.

You said in Singapore that you would welcome 100 per cent FDI in new ports and airports. Isn't this against your party's line?
What I said was we need a second airport in Calcutta. And this can come up with foreign participation since it will translate into transfer of expertise. But the government of India's policy is to allow only 49 per cent FDI in such projects. So how can I ask for 100 per cent FDI in an airport project?

Is there a dichotomy between your view and that of your party on globalisation?
None whatsoever. I've said what everyone else in my party has been saying. We cannot stop the process of globalisation. We have to embrace it. But we don't need to embrace it without conditions that will protect our own interests. We cannot allow unrestricted entry of MNCs at the cost of our own industry. We have to provide level playing fields to our own industrialists, our own manufacturers, our producers, out agriculturists, our entrepreneurs.

But aren't there much reservations over your proposal to hand over farmlands for industrial and commercial use?
I don't understand what the fuss is all about. We're very clear on this. We will not allow acquisition of fertile cropland. We will not allow contract farming. Sixty five per cent of our people are dependent on agriculture and are we mad that we will sacrifice their interests? Only non-fertile and fallow lands will be converted for industrial and commercial use. All the landowners will be compensated adequately and will be rehabilitated.

Did the controversy arise because you were inking a deal with the Salem group that's close to President Suharto and had got farmers forcibly evicted for a project in Indonesia?
I want investment. Money has no colour or nationality. As long as it is not money from smugglers or black money, I have no problems getting it for West Bengal. We cannot dwell in the past. Look at China. Does it have any problems accepting investments from capitalist countries? Does Vietnam not want American capital?

You welcome FDI, you have no problems with accepting loans from the ADB or other such bodies and you support restructuring PSUs. How are your views different from the Congress'?
I can only talk for myself. We realise the need to accept loans from multilateral agencies, but our only condition is that there should be no strings attached. We will not allow any agency we take a loan from to dictate terms to us. We are for restructuring only sick PSUs, not ones that make profits. In Bengal, we've first tried to revive sick PSUs and only when such efforts have failed have we sold them off to private parties.

Have Communists in India undergone an ideological change?
Change is constant. Marxism is a science and not a dogma. We have to keep pace with the changing times, we have to reform and perform or perish. I believe we cannot stick to old principles. China has changed. We also have to change and we are changing. But in this process of transformation, our commitment to protecting the interests of the poor of the country, the downtrodden and the marginalised will not change.