Doc Feels It In His Bones

It's India's secret malady—osteoporosis—that bothers him. Or rather, the elitism of its cure. 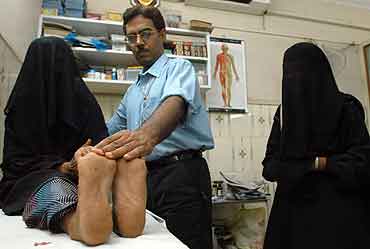 outlookindia.com
-0001-11-30T00:00:00+0553
In the hierarchy of diseases, much of our attention has been consumed by AIDS, polio or tuberculosis. Osteoporosis is undoubtedly on the backburner. Yet the true picture of this malady of the bones is very grim. According to who figures, one out of eight males and one out of three females in India suffers from osteoporosis, making India one of the largest affected countries in the world. The disease weakens the bones and in many cases even causes fatal disabilities. But if detected early, it can be treated. Often it’s the underprivileged who fall prey due to severe malnutrition and low calcium intake.

Orthopaedic care is costly, making it difficult if not outright impossible for many to avail of treatment. Government hospitals treating orthopaedic cases are overworked and hence it is often impossible for the poor to get succour. This ‘perpetual crisis’ is what prompted Dr Sushil Sharma, an orthopaedic surgeon, to start awareness camps and free weekly opds in east and central Delhi.

The Arthritis Foundation of India (AFI) was formed in September 2001. In the first year, Sharma examined some 100 patients a week rendering free advice and medicines to the needy. His efforts bore fruit when the who-affiliated International Osteoporosis Foundation granted recognition to his NGO in 2002. Sharma is faced with medical challenges almost everyday since most of his patients are working class people. "With nutritional levels abysmally low, their treatment can be a complex process," he says.

Osteoporosis-related injury is not visible and often tends to hamper professional performance. For men, it means fewer mandays at work, shrinking employment and earning capacities. For women, it becomes ardous to handle dual workloads at home and work. According to Sharma, six out of every ten fractures and bone injuries in India are caused by osteoporosis. "Contrary to our assumption, trauma (accidents) is not the main cause of serious injuries. It is weak bones that cause it. Trauma accounts for barely 40 per cent of injuries," he says.

Sharma says his biggest success has been the awareness camps where clinical examination and free medicines are offered to the patients. These camps have done their bit in addressing the needs of thousands who cannot afford the expensive medication. Sharma says he sources his medicines and expensive equipment from pharmaceutical companies. "As a doctor, I get a lot free samples which I regularly plough into our camps. We have to make periodic appeals to drug manufacturers who have thus far responded generously when they are informed that the camps are free and for a charitable cause," says Sharma. In addition, literature on bone health is provided. Besides, all camps also include detailed exhibitions on how best to counter osteoporosis.

In India, resort to osteoporosis therapy remains largely the preserve of the rich as private clinics and nursing homes eagerly solicit this expanding ‘market’. Given the magnitude of the problem, Sharma says, it is important that the government recognises osteoporosis as a priority disease. In the West, there is a growing awareness of bone diseases. Australia, for instance, has put osteoporosis on its list of national priority diseases. Sharma hopes India will follow suit. He believes that a consolidated effort is necessary to deal with the situation. "There is no doubt that more agencies have to get involved because it is way beyond the means of any one NGO to deliver the goods," he says.

Shalom, Or Is It Salaam?