The new visibility of Indians—fresh off the ships, insufficiently ‘Aussie’, swamping the job scene—feeds a latent racism 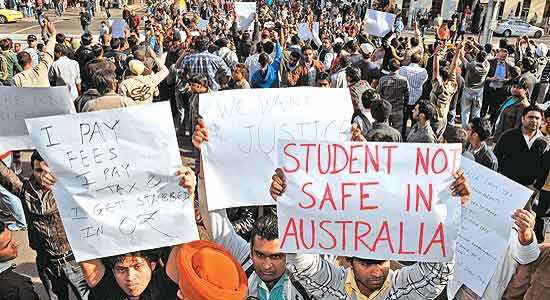 Kanan Bhargawa still shudders at the memory of March 16, 2008. This young student from Ambala was accompanying his friend Jassi that day to the local railway station of Sunshine, the city’s relatively poorer suburb where many Indians stay. They had gone to pick up Jassi’s wife who was returning from the city at night. The moment the duo reached the station, they were accosted by a group of boys. One of them, presumably their leader, demanded a dollar. When Kanan said he didn’t have one, the group fell upon him, raining blows and mouthing racial expletives. Jassi tried to intervene, only to be beaten up as well. Their fury vented, the assailants vanished in a jiffy. Kanan has lost vision in his right eye. In a quivering voice, he says, “I was lucky, I wasn’t knifed.”

“Not only are Indian students taking away seats in colleges; by staying behind, they are also taking away jobs,” says a right-wing party leader.

One might think that suburbs such as Sunshine are prone to random violence. One may not even slot the attack on Kanan as completely racial. But talk to Indians walking around in Melbourne, and they’ll tell you that the spectre of racism is stalking them in every neighbourhood. Take Kamlesh Patel, a post-graduate in chemical engineering from the prestigious Monash University. He stays in Prahran, a posh neighbourhood, safe from the baddies of Sunshine. A few months ago, as Patel was walking his dog, a carload of youngsters braked to a halt near him. From inside the car, one boy shouted, “Hey, you Indian bastard, why don’t you go back home?”

There is what can be termed ‘repressed racism’ in Australia, erupting at the slightest provocation or under the influence of liquor or often for no reason other than the sight of an Indian. Gurdeep Singh’s been driving a taxi for some years now in Melbourne. Only last weekend, a drunk Australian in his car exploded, “F*** off bastard, go back to your country and work.”

These examples illustrate vividly the danger Indians in Melbourne face daily. Does this arise exclusively from an innate racism? Well, the economic fear that Indians, arriving in hordes, will rob them of jobs in the enveloping gloom of the slowdown ties in with it. As does the ‘cultural’ factor that the growing Indian community, largely drawn from small towns and villages back home, is perhaps as a group not sufficiently adjusted to the local culture and its demands?

Adds another, “The government should actively encourage bringing in Christians and white people from Zimbabwe and South Africa.”

It is those in the left-liberal parties who feel the attacks on Indians, or at least some of those, have a strong racial basis. Those in the extreme right-wing outfits deny this outright. Among the latter is Jim Salaem, head of the Australia First Party, which has adopted the contentious immigration issue as its principal cause. Salaem says it isn’t the white Australians who are attacking Indians. He blames the violence on those who have migrated from Muslim countries or Africa. But he concedes that the government’s open-door immigration policy has created enormous problems for white Australians. “The government’s education policy of getting students from India and other countries is depriving our local boys a chance to get into universities,” Salaem told Outlook.

The situation has been compounded, says the Australia First leader, because the education policy is closely linked to the immigration policy, which allows a large number of overseas students, including those from India, to work in Australia until they are granted citizenship. Salaem fulminates, “Not only are these Indian students taking away the seats in colleges and universities, they are also taking away the jobs that could have gone to an Australian student. In addition, by staying back and getting a permanent residency in Australia, they are becoming a serious threat to white Australians in the job market.” He consequently wants overseas students to return home after they complete their studies.

Similarly, Bob Vinnicombe of One Nation, yet another right-wing group, wants a cap on the number of immigrants coming to Australia. “The government should actively encourage bringing in Christians and white people from Zimbabwe and South Africa,” he told Outlook. Neither the Australia First Party nor One Nation matters much in Australia’s parliamentary politics. But Vinnicombe claims that many politicians in other parties share his views, though they refrain from going public for political reasons. His and Salaem’s views may not be shared by most Australians, yet the attacks on Indians have brought the immigration and race issues to the fore again.

“Most Indian students perhaps know about our geography, but know little about Australian history,” says a professor of history in Sydney.

Perhaps their views have also gained ground because Indians have become more visible in Australia. The Australian can’t miss him in his daily routine. He sees the Indian on the train when he goes to work; it’s the Indian who serves him at the takeaway; the Indian is there again behind the counter when he goes to buy groceries at the supermarket; he mans the gas stations, or is behind the wheel every time the white Australian takes a taxi at night. As if all this isn’t enough, he also finds a few of them living in his posh neighbourhood. Says Gautam Gupta, spokesperson of the Federation of Indian Students in Australia (FISA), “Perhaps somewhere in the Australian mind, the Indians have started playing a role.”

The furore over racism is also a case of mismatch in perceptions. Most attacks are seen back in India as racial, even though some can be purely for robbery. In Australia, an attack is not deemed racial till it can be established that the intent was such, and not purely criminal. To understand why Indians are particularly susceptible to mugging, one only has to hear the mean joke doing the rounds here: “What’s common between an atm and an Indian? You get money whenever you hit them.”

It’s true many young Indians flaunt their iPhones, iPods or carry laptops around the city. Those looking for easy money target Indians because they have things that can be sold easily. Since most Indian students share a pad with six or seven others, they feel it’s safer to carry cash with them rather than leave it behind. They are loath to deposit money in a bank fearing they might be asked whether they are adhering to laws regulating the number of hours they can legally work. No wonder, the authorities here are advising Indians not to carry their valuables on them. This has FISA president Amit Menghani bristle, “How can you ask them not to carry their mobile phones? How will they ask for help if they are attacked?”

Agrees Benjamin Cass: “There are only two things they know about Australia, that it has kangaroos and that we play cricket.”

Partly, the violence in Melbourne, including attacks on Indians, has increased because the economic downturn has compelled the Australian government to downsize its police force by 2,500 personnel. The state of Victoria today has a police force of only 13,000 personnel to man a population of over four million people. So, you no longer find a cop patrolling many a railway station, often the site of attacks.

Indians are also considered soft targets because they don’t retaliate. No one messes around with the Chinese, for instance, because they rush out to help their fellow nationals in distress. The Indian, in contrast, it’s said, rushes to the media. The Indian community is also a house divided. Melbourne has 1,50,000 Indians, but on the January 26 celebration of the Australian National Day, they were the only nationality marching under four separate banners. 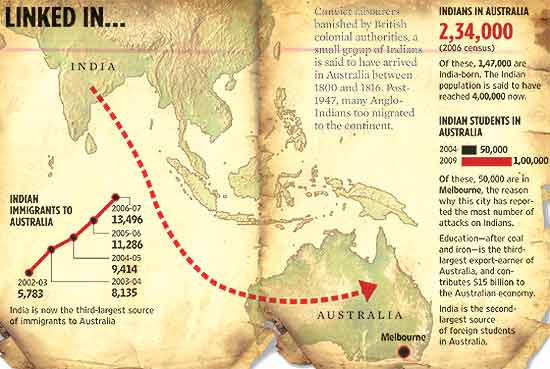 Nor is there unanimity among Indians whether or not these attacks are racist in nature. Those who are rich and have resided here for years vehemently deny that Australians are racist. Vasan Srinivasan, president of the Federation of Indian Association of Victoria, can be counted as one among them. “I have been living here for the last 23 years,” he told Outlook. “but have never experienced any racial slur from the Australians. I have two young daughters; if they were racist, do you think I would have stayed in this country?” Of course, there is always the counter-argument: that the rich can keep away from troubled areas, not travel in public transport and are therefore less vulnerable to racial abuse or attacks.

No one messes around with a Chinese because fellow nationals run to his aid. The Indian, on the other hand, rushes to the media.

This group of rich Indians partially blames the attacks on their brethren who have arrived recently in droves, belong to small towns, and are completely oblivious to the cultural sensibilities of Australians. They blast their Bhangra music on trains, talk loudly while travelling in public transport and make lewd comments and gestures at young Australian girls. Says Gagandeep Singh, who manages a petrol pump in one of the Melbourne suburbs, “Some months back, while travelling on a train with my parents who were visiting me from Punjab, I felt so ashamed because you could clearly hear the choicest Punjabi abuses from a group of Indian boys who were also in the compartment.” An Indian lady says a young Australian girl once confided in her that she prefers to stand in train coaches than to sit next to Indian boys. Otherwise, she said she’d spend the entire travel time warding off their advances.

The controversy over racism also stems from ignorance about each other’s culture and history. “Most Indian students perhaps know about the geography of Australia, but have very little knowledge about its history,” says Heather Goodall, a professor of history at the University of Technology, Sydney. She says most Indians only know that Australia followed a ‘white-only’ immigration policy for much of its history, forgetting its strong left-liberal tradition and its fight against racism. Agrees Benjamin Cass, who has worked with Indian students planning to come to Australia to study, “There are perhaps only two things they know about Australia: one, that it has kangaroos and two, that the people here play cricket.”

“Travelling on a train sometime back, I was ashamed, as you could hear the choicest Punjabi abuses,” says Gagandeep Singh.

Indeed, the attacks on Indians have prompted many Australians to call for urgent introspection and acknowledgement that racism is still a serious problem in the country. Says documentary filmmaker John Bolston, “When you’ve been told by your political leaders that you are the best, then it is difficult to accept yourself as racist. Perhaps, it is time that the government takes the initiative for us to wash our dirty linen in public.” The debate on racism is expected to gather momentum as Victoria and Australia inch closer to elections by this yearend.

Others also want Indians to remember that what they are witnessing, though reprehensible, are typically the birth pangs every immigrant group has experienced when their numbers have grown substantially in Australia. It happened with the Chinese, Afghans, Jews, Greeks, Lebanese and Vietnamese. It’s now the turn of Indians, who must unite and establish linkages with liberal Australians to protect themselves—and their interests.