Do You Have A Licence For The Monkey?

The old list of ping-pong-ball-headed Indian monkeys that Sellers drew on is now outdated. The time is ripe for a new typology of the urban post-modern Hindustani purush. 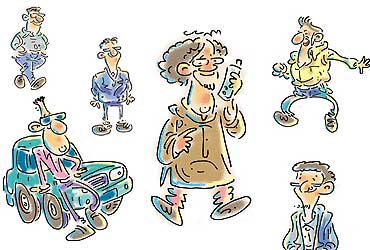 Well, of course he was, and that was where most of the laughs came from. The problem became compounded by the fact that Sellers was a great comedian and, even though mostly off target, he still managed to catch something that we all knew was in some part us—homo subcontinenticus. It must be the same feeling Frenchmen get when watching Sellers' Pink Panther films—"duyu ave a lesawnce furr ze minki?"

Licence or no, the old list of ping-pong-ball-headed Indian monkeys that Sellers drew on is now outdated. Perhaps the time is ripe for a new typology of the urban post-modern Hindustani purush. Below I attempt to start the ball rolling with a biased, necessarily incomplete and probably inaccurate list of a few current Indian male types.