Seven generations of a family have held firm to the baton. Will the chain be finally broken? 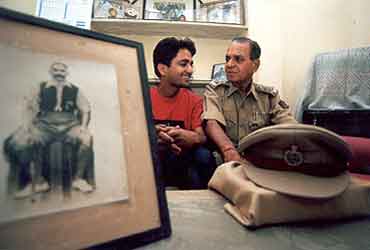 outlookindia.com
-0001-11-30T00:00:00+0553
For over 17 decades, seven generations of the Singh family, the proud descendants of a line of Rajput warriors settled near the Shahabad range in Kesupur village, Bihar, have been redefining the art of passing the baton. The current deputy superintendent of police, Patna, Ram Kumar Singh, is the seventh generation that has made serving and protecting a family business since 1832.

The rugged terrain of Shahabad is best known for bamboo, mangoes, and as the birthplace of Babu Veer Kunwar Singh—a renowned freedom fighter during the 1857 Sepoy Mutiny. The Mutiny also saw the retirement of the first of the Singh policemen, Subedar Major Sheo Charan Singh, who'd joined the paramilitary police in 1832, fought for the British in gruelling campaigns in Afghanistan and Nepal and even won British gallantry awards, inaugurating a tradition of loyalty, courage and honour that the Singhs have spent their lives upholding.

A brief insight into Sheo Charan Singh's personal life might help explain why family traditions still reign in a changing world. For one, he broke up a marriage he'd made for love with a girl from Ajmer and a different caste to remarry a woman his family approved of. The fierceness of his loyalty to his clan still reverberates in the lives of his descendants struggling to shine in the shadows of their illustrious ancestor.

Babu Bideshwar Singh, Sheo Charan's son, joined as a sepoy just before the 1857 uprising fighting Shahabad's legendary hero and survived the Mutiny to serve on till 1877. His sons, Shiv Tahal and Shiv Dhari, carried the torch as well though not very far—they were havaldars when they retired after around four decades of policing in 1905. The family flag then fell into the hands of Ram Raj Singh who joined the police force in 1901. He served through the horrors of the World War I. His son Jeo Nandan Singh initially won fame via his hockey skills. He also won the favour of British officers which subsequently fetched him his princely starting salary of Rs 61. Through the frenzied years of the freedom struggle and trauma of World War II, he wielded his hockey stick and policeman baton with equal enthusiasm. But his story ended tragically—a fellow sentry shot him accidentally while practising at the garrison arsenal one evening in 1944 in Purulia, West Bengal. He died in hospital.

The next sequence in this law-enforcement saga is that of Generation Six: Enter current deputy S.P. Ram Kumar Singh's father Shyam Sundar Singh, a brilliant student who started his policeman's innings three years before independence as a subedar and served for almost three decades before his death in 1975 of a heart attack. By then, his son, a political science and psychology graduate, had already put in a decade of service in the force.

The key to all this inter-generational identity could be completely biological, of course, it's just a question of genotype—the "internally coded, inheritable information" that your parents pass on which might determine your mental makeup. But it's far more likely to be sociological. In a land where the caste system still holds sway, it's not uncommon to come across families and communities which have stuck to the same profession, be it weaving or toddy-tapping. Several villages always send their sons to the army (Churu district in Rajasthan being a prime example). The Singhs of Kesupur are perhaps an extreme example of this phenomenon. However, the loyalty of the clan to the profession is yet to face the ultimate test.

What of Generation X? Only time will tell whether the eighth generation will also join the men in khaki. Ram Kumar Singh's four sons are engaged in a variety of professions—for instance, one is a baseball player. But will they be able to resist the lure of the lathi? And are the proudly displayed bravery awards won by their five-times-great-grandfather enough to convince them that a policeman in Bihar is the best possible thing to be? Sir Arthur Conan Doyle once wrote that there was nothing more unaesthetic than a policeman, but it's difficult to imagine the Singhs subscribing to that particular code.