Shillong is all its parts, and then some 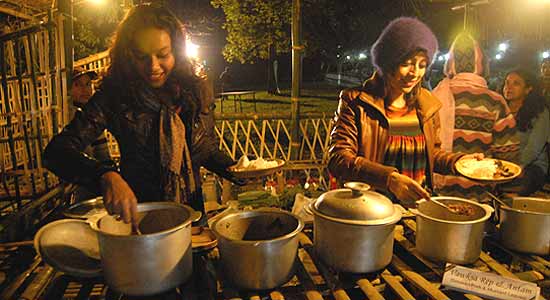 In the Shillong where I grew up, you were what you ate. School tiffin boxes said it all: the Bengalis ate potato chops and sandesh, the Khasis ate rice and meat, the Marwaris ate puri and pickle, the South Indians ate lemon rice or upma, and I, who had been vaguely identified as ‘a Hindi’, had a lunchbox that measured up to this vagueness—macaroni, jam sandwiches or chapati rolls.

Everyone naturally found everyone else’s lunch more fascinating. I came to regard a plate of cold rice with a few pieces of rudimentarily cooked meat on the side as exotic. Later, freed of school and lunchboxes, I’d eat as much jalieh and dohmasi as I could at teashops that dotted the university campus.

Dislocations can make one desperate for familiar food—I like how, for instance, Ashima in Jhumpa Lahiri’s The Namesake tries to make jhalmuri with American Rice Krispies and Planters peanuts. But the deeper dislocation is the one which makes you certain, from the age of circa six, that everything on the inside is boring and everything on the outside is fun. Much of the excitement of my growing years lay in food and much of this food was wonderfully unwholesome. I was addicted to MSG—the oily noodles and gooey sauces of the Tibetan-run Chinese restaurants; I ate without restraint the murderous aloo-muri from Bihari roadside hawkers; I hung out in the cafeteria near Nazareth Hospital, run by a gaggle of cheerful, dolled-up women, and devoured as many greasy hotdogs and shakes as my pocket money allowed.

Shillong’s peculiar cultural hotch-potch could not be sustained by someone like me: it would only work if everyone ate exactly what they were expected to. At school one never ever saw the nuns do something as earthly as eat, but from the lingering smells in the refectory I imagined them imbibing only chicken broth from blue-ringed enamel bowls and triangles of cucumber sandwiches.

To visit families who lived in the Khasi locality of Mawlai meant taking your place at the table for tea, which always consisted of novelties like rice flour putharo, boiled colocasia with honey, the crispy white tuber sohphlang, and sponge cake and buns from the oldest and best bakery in town—Mahari and Sons. My mother’s Punjabi army-wife friends came to represent mountains of chhole and gaajar halwa, while my father’s bookish Malayali friends stood for fat pods of “Alleppey Green” cardamom and jackfruit chips, which they always brought back as gifts from their trips down south.

In fact, bringing food back from one’s ‘native’ place was a common way of being nostalgic. My grandparents transported clay pots full of chamchams from their ‘Hindi’ village; an aunt returned from Calcutta with the then rare, melt-in-the-mouth soan papri; a classmate from Nagaland passed on jars of unparalleled smoked beef chutney.

Over time, all this became too familiar. But after years of travel across the country and eating local cuisine, I return to Shillong to discover that my satiation with its food was premature. Regal still has the best dosas; the 75-year-old Delhi Mistan Bhandar still has the best jalebis; the momos are superlative and the orange honey is special. To sit on a narrow bench in a teashop with the tea kettle always on the boil and have a meal of rice and chicken with some dried fish tungtap and fermented soyabean tungrymbai on the side remains a unique pleasure.

And as for the schoolgirls, I think their lunchboxes still reflect the different dnas of which Shillong is made.

(The author is a poet and novelist.)

Once Upon An Erissery