The BJP ought to be pinned down to the ground. Yet the Opposition watches, and waits. 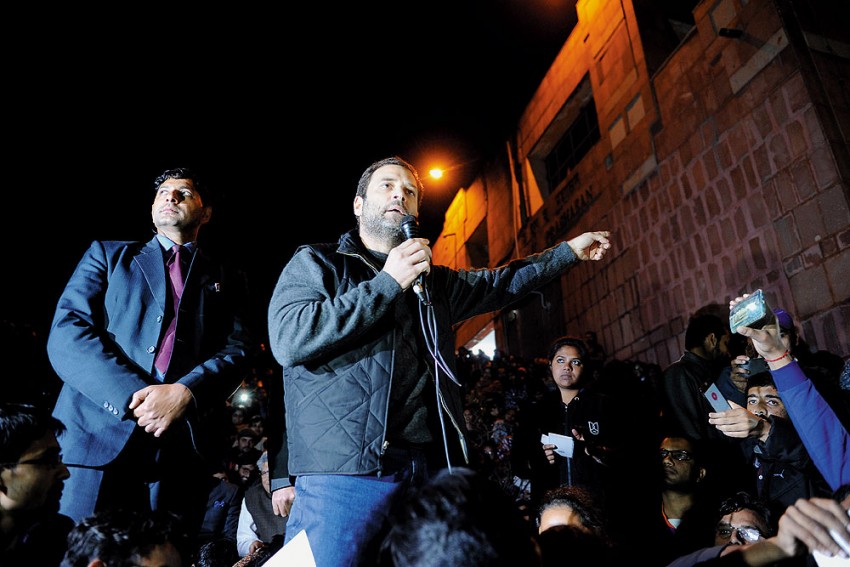 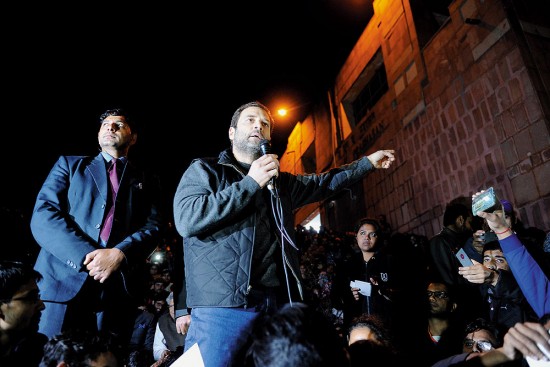 Rahul Gandhi does his pop-ups at every hot spot, from Hyderabad Central University to JNU and all the places in between. Yet they have the littlest of impacts other than the obligat­ory newspaper reports, since there is no follow-up and no one else from his party takes up the worthy cause. It’s all reduced to a photo-op. It took Mayawati over a month to react strongly to Rohith Vemula’s suicide, and the champion of Dalits waited for Parliament to open before she took on Smr­iti Irani and came off second best. The Left, which should be in the forefront of the JNU fracas, is so concerned with elections in West Bengal and Kerala that apart from voices like Sitaram Yechury and D. Raja, it has all but deserted the battlefield. Mamata Banerjee, also poll-bound, has been unusually quiet on the students’ issue—not surprising given her own record. Nitish Kumar is struggling in Bihar and has no time for national politics. It all adds up to a monumental tragedy: at a time they should be counter-attacking fiercely, the Opposition seems to be an under-confident, mewling lot.

Clearly, it is still to recover from the 2014 Lok Sabha elections, where the Congress was reduced to 45 seats, the Left was decimated and other national parties such as the JD(U) were left with practically no voice in the Lok Sabha. Hope surfaced in the form of the Bihar elections, which showed that the BJP could be vulnerable and the Opposition, if it put up a united front, could challenge the BJP’s dominance. The suicide of Hyderabad University student Roh­ith Vemula, followed by the events in JNU and the Jat agitation in Haryana, were golden opportunities. Yet, after venting ini­­­­tial indignation, the opposition has fai­led to get any mileage out of the government’s terrible handling of these issues. By restricting their protests to the con­­fines of Parliament, the Opposition has shown its­elf to be not just disunited, but also toothless. When CPI deputy general sec­­retary Gurudas Dasgupta was asked why political parties are not creating a common front, he told Outlook, “Sometimes questions can’t be answered. Wait for some time.”

The difficulty is that the Left has been steadily weakened over the past decade. The joke in many party circles is that only ‘left-outs’ are in Left parties now. The Opp­osition is now banking on trade unions to lead the fight against the government. The hope is that the Union budget will spell bad news for the working class, who will rise in protest, thus giving the Left a much-needed impetus. Opposition parties are also waiting to raise issues such as labour reforms, land acquisition, farmers’ agitation and unemployment. But the biggest hurdle remains the unity required to put up a joint fight. “The situation calls for joint action and the issues are also serious. We did not expect the government’s graph to go down so fast. It is time to put our act tog­e­ther and bring the people together. A movem­ent is building up, but we have to galvanise the people and take charge of the issues,” says CPI(M) MP Mohammed Salim. That is just wishful thinking  in the absence of a common programme. Says CPI general secretary S. Sudhakar Reddy, “There is no joint decision. We do sup­port other Opposition parties issue to issue.”

“We are trying to work out a strategy for a common front but it might take some time, since the issues are too diverse and of a different nature.”
Manoj Jha, RJD spokesperson

Actually, there appears to be no meeting ground on many issues. A senior opposition leader admitted that not all Opp­osition parties are on the same page even on the Jat reservation issue. “There was no political backing from the Opposition for the Jats.” In reality, the messy mismatch between various regional scenarios precludes any real unity. Veteran Left leader Somnath Chatterjee feels it is “neither practical nor tactical” for the Congress and the Left to come together (they are rivals in Kerala but likely to have tactical understanding in Bengal). Significantly, none of the other opposition parties talk of a common political front. When D.P. Tripathi of the NCP was asked why a common front was not forthcoming, he offered a weak defence: “We are doing it in Parliament and we are also trying to develop a consensus outside.” JD(S) leader H.D. Deve Gowda adds that it is time all non-NDA parties come together but “it is not happening and my health is not permitting”.

Nitish Kumar had the clout and credibility after the Bihar victory to take the lead in the battle against the government, but he has merely addressed a token press conference on the JNU issue, while Laloo Yadav only commented on it some days later. JD(U) MP Ali Anwar Ansari agrees the Opposition at the Centre is “losing the opportunity definitely”, while he personally thinks of the sedition charge on students as “dangerous and throttling democracy”. At the moment, Nitish is so busy trying to get his government up and running that he has little time for national politics. Even in the Congress, not all leaders are on the same page as Rahul. In private, some of them said Rahul shouldn’t have visited the campus and spoken for a section of the students, which the BJP pounced on with relish and described as a sign of  support of ‘anti-national’ elements. Sou­rces say senior party leaders differ with Rahul on the party’s approach to many issues. Many of them believe in a sober, long-term approach which can consolidate its cadres, as opposed to parachute politics and looking for quick results. Even in Parliament, there was no coordinated effort between the Congress and the BSP on raising the issue of creeping RSS/BJP ‘control’ in Aligarh Muslim University, Benares Hindu University and Lucknow University. BSP MP Ambedh Rajan merely says: “Wait and see what happens in Parliament.”

The main stumbling block seems to be state elections that are due in the near future. If Uttar Pradesh, leaders are looking at the 2017 assembly elections, and other states like West Bengal, Kerala, Tamil Nadu and Assam are facing assembly elections in a couple of months. The Trinamool Con­gress remained mostly silent throughout the JNU incident—except for a Sugata Bose speech in Parliament. Its confusion owes to the budding Congress-Left match-making  before assembly polls. This seems to indicate that Mamata does not want to offend the BJP and prime minister Narendra Modi. When senior TMC MP Saugata Roy praised Jadavpur Univ­ersity vice-chancellor Suranjan Das for his handling of a situation where students were taking out a rally in support of JNU, he immediately got a rap from Mamata for having spoken ‘out of turn’. Similarly, in Tamil Nadu, the AIADMK did not raise the Rohith Vemula case or the JNU issue, saying “these are matters of other states”.

In Kerala, the CPI(M) did make an atte­mpt to raise the JNU issue. In the 2015 panchayat elections, a large section of Mus­­lim voters of the UDF had moved to the LDF on issues like beef, Kalburgi, ghar wapasi and love jehad, but this time, apprehensive about voter sentiments, parties are not sticking their neck out on any issue. In Assam, where elections are around the corner, the JNU issue is nowh­ere on the radar.

The bottomline is that state elections, the ongoing electoral negotiations and consequent disunity, all this plays into the hands of the NDA. Unfortunately, that is allowing the government to proceed with its stifling, ultra-nationalistic agenda virtually unchallenged. By the time the Opposition rouses itself up in concerted action, it could be too late for it to gather momentum for a body blow.