Dissimulation In Words And In Images

A section of the media will peddle lies and destroy reputations for fame, says Balbir K. Punj 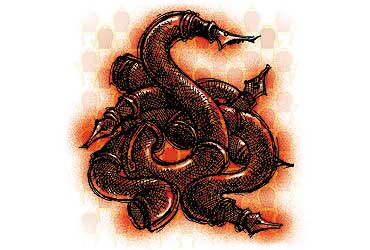 outlookindia.com
-0001-11-30T00:00:00+0553
Is there a way one can distinguish a free and vibrant press from certain flagrant elements who masquerade as journalists to further their politico-criminal agenda of destabilising elected governments? If one looks back at the major controversies which have stalked Indian politics during the past four years of the BJP-led coalition, the dividing line is indeed blurred. A section of the media, uncomfortable with the reality of the BJP being returned to power, has been busy distorting facts and inventing incidents to give the party a bad name. If, in the process, truth became a casualty, ruining some innocent reputations and blackening India's name in the comity of nations, the media couldn't care less.

One such 'exposé' was by tehelka.com. It shook the government and rocked the country, dramatising 'corruption' in the higher echelons of the army and political leadership. But till date we don't know whether the tape that destroyed several reputations and took the country by a storm was genuine or had been doctored. Tehelka has successfully fought all efforts by its victims to put the tape under forensic scrutiny. However, a recent incident of poaching on the Uttaranchal-UP border has once again drawn attention to the website's questionable modus operandi. In the defence deals story, Tehelka poached on reputations through call-girls. Now it's found mixed up with professional poachers.

Two poachers, Inam and Meharban, were nabbed on May 23. The police recovered a digital camera from them. Curious, the cops conducted an inquiry and discovered they were equipped for an "assignment". A certain Pankaj had briefed them about the task. Subsequent investigations revealed that Pankaj was none other than Kumar Badal, a reporter with Tehelka!

The duo claimed they were given the camera to film the actual act of poaching. The roll they had handed over to Badal has also since been recovered. Tehelka's latest "journalistic enterprise" consists of hiring poachers as "journalists", after having used journalists as poachers for its 'Defencegate' story. Needless to say, the film would have fetched Tehelka both moolah and kudos abroad, at the cost of India's fauna and reputation.

Dramatisation of crime stories by the media is neither uncommon nor wrong. Sometimes we need to sensationalise a crime story, particularly in the audio-visual media, to make up for certain missing links. The camera can only capture the spoils of the crime, not the process. But what would you call this dramatisation that involves real killings? The credo of media organisations like Tehelka seems to be: if there is no crime, commit one and paste it on your target. Make money, win laurels for "investigative journalism"—and fix your ideological enemies (read the Sangh parivar). Blend half-truths with complete lies and parade them as "facts".

A case in point: the recent riots in Gujarat. The danse macabre that the state witnessed was used to strengthen certain myths about the Sangh parivar, myths that a section of the media has been spreading for decades. This section can be divided in two: those who harbour a pathological hatred against the Sangh for ideological reasons and (mis)use their professional expertise to spread disinformation against it; and those who are professionally honest but have become unwitting allies of the former in the absence of exposure to an alternative viewpoint.

During the Gujarat disturbance, sophism was in full swing and certain myths—mayhem against the Muslims was state-sponsored, Muslims alone were its victims and communal violence and the Sangh parivar were synonymous—which have since been exploded, were disseminated. The bottomline seemed to be: you eliminate the Sangh parivar from India and the country will be a paradise where everybody will enjoy life in peace.These lies-mongering members of the media had become victims of 'lynch' mentality.

Reports on riots often had quotes which were falsely attributed. Incidents which did not take place were described in gory detail. And there were instances of "intellectuals", better at fiction than fact, trying to outstrip other "secularists" in a race to paint the Sangh parivar in lurid colours. No effort was too small and no lie too big for them, since the purpose was "noble"—squash the "evil" called Sangh parivar.

Arundhati Roy, for instance, presented a scroll charged with damnation against the Sangh parivar in Democracy: Who's She When She's at Home? (Outlook, May 6). We all know by now that her vivid account of how former Congress MP Iqbal Ehsan Jaffri and his family were killed was a piece of fiction. Roy had begun her charter of hate with another damning description: "Last night a friend from Baroda called. Weeping. It took her fifteen minutes to tell me what the matter was. It wasn't very complicated. Only that Sayeeda, a friend of hers, had been caught by a mob. Only that her stomach had been ripped open and stuffed with burning rags. Only that after she died, someone carved 'OM' on her forehead".

Shocked by this despicable "incident", I got in touch with the Gujarat government. The police investigations revealed that no such case, involving someone called Sayeeda, had been reported either in urban or rural Baroda. Subsequently, the police sought Roy's help to identify the victim and seek access to witnesses who could lead them to those guilty of this crime. But the police got no cooperation. Instead, Roy, through her lawyer, replied that the police had no power to issue summons. Why is she hedging behind technical excuses?

But this sort of sophism is not new for Gujarat. The people decrying Gujarat as a "fascist state in the making" are the ones who spun stories about alleged attacks on Christians in Gujarat, Karnataka and Andhra. Fortunately, nobody had been killed or injured in those "attacks". They also held the Sangh parivar responsible for the blasts that rocked some churches in Karnataka and Andhra. So, when the Deendar Anjuman was found guilty of these attacks in Congress-ruled Karnataka, the Sangh-bashing "secularists" promptly assumed a vow of silence. They didn't answer how "attacks" on Christians stopped with the arrest of SIMI and Deendar Anjuman kingpins. But then it wouldn't perhaps have helped. Much damage had already been caused to the country's morale and image.

Gujarat began at Godhra, but how did Godhra begin? And what explains the occurrence of Godhra within a week of the Budget session in Parliament and a virtual end to the riots on its adjournment? What poisoned the minds of gullible Muslims? It was surely the chronic demonisation of Ram sevaks by a "secular" media for over a decade. The media went to the extent of glossing over Godhra—or depicting it as something inevitable. A much-floated story about Godhra might serve as an example.

You must have read some accounts of what preceded Godhra—an altercation between Ram sevaks and Muslim stall-owners, abduction of a Muslim girl by Ram sevaks, spontaneous gathering of enraged Muslim mobs near Signal Falia trying to recover her and the burning down of the train. As revealed by Prem Shankar Jha (Outlook, March 25), the story emanated on the basis of a fictitious e-mail.

Many newspapers referred to the story but which of them carried the contradiction as well? Who was responsible for the mischievous e-mail? Whose purpose did it serve? Why did most of the "secular" media continue to play up the story without any verification? Was it because it justified Godhra and helped paint the Ram sevaks as lumpens? Didn't the agenda of the disseminators of the mysterious e-mail and the "secularists" overlap?

What people like Roy do does not shock me.They, of the Macaulayan-Marxist mindset, have been using such fiction to demonise nationalist elements for over a 100 years now. Here is how Antony Wild (The East India Company, HarperCollins) describes the coverage of the first war of India's independence by contemporary European media. "The western press surpassed themselves in the vilification of the wretched Butcher of Cawnpore. One French periodical came up with a peculiarly refined description of his barbarity: he was said 'to read Balzac, play Chopin on the piano and, lolling on a divan and fanned by gorgeous Kashmiri girls, to have a roasted English child brought in occasionally on a pike for him to examine with his pince-nez'." The man demonised here is Nana Sahib Peshwa.

"Another story put about to inspire the troops was that Miss Ulrica Wheeler, the daughter of the Commanding General at Cawnpore, had been kidnapped by a sepoy, whose head she cut off as he slept, adding those of his family for good measure, before throwing herself down a well. Poems were written and illustrated, commemorating her bravery and honour, and her heroic tale steeled English resolve. However, in 1907, a doctor in Cawnpore was summoned to the deathbed of an elderly lady—Ulrica Wheeler—who told the doctor that she had lived happily married to the sepoy who had rescued her from the slaughter at Cawnpore and now wished for a Christian absolution." Doesn't this sound familiar? Doesn't Ulrica's story remind us of the "murder" of Ehsan Jaffri's daughters and Sayeeda?

As we await the truth on the poaching incident, another case of "media freedom" has surfaced. Iftikar Geelani, a "journalist" and son-in-law of Jamaat-e-Islami leader Syed Ali Shah Geelani, has been arrested for anti-national activities. But some media organisations have sought protection for this "journalist"! First prostitutes, then poachers and now a spy claiming the privileges of a newsman.

Such instances are endless. The media's always been hailed as the fourth estate. But a section of it is compromising its commitment towards truth on the altar of insidious gains and is acting like a fifth column (pun unintended). It is acting like a public relations arm of the "secular" cabal (read the Congress, communalists and communists) that remains wedded either to Nehruvian megalomania, Jinnah's divisive agenda or Moscow's defunct politics. To be committed to an ideology is not wrong, but twisting or inventing facts is.

(The writer is a BJP MP and can be contacted at bpunj@email.com.)