Home  »  Magazine  »  Society  » Issue Of The Year »  Disposable Pads Are A Hazard, A Look At Some Alternatives

Disposable Pads Are A Hazard, A Look At Some Alternatives

With India’s menstrual waste estimated at 1,13,000 tonnes annually, many NGOs and groups are working around the problem of waste and the health consequences of disposable pads. 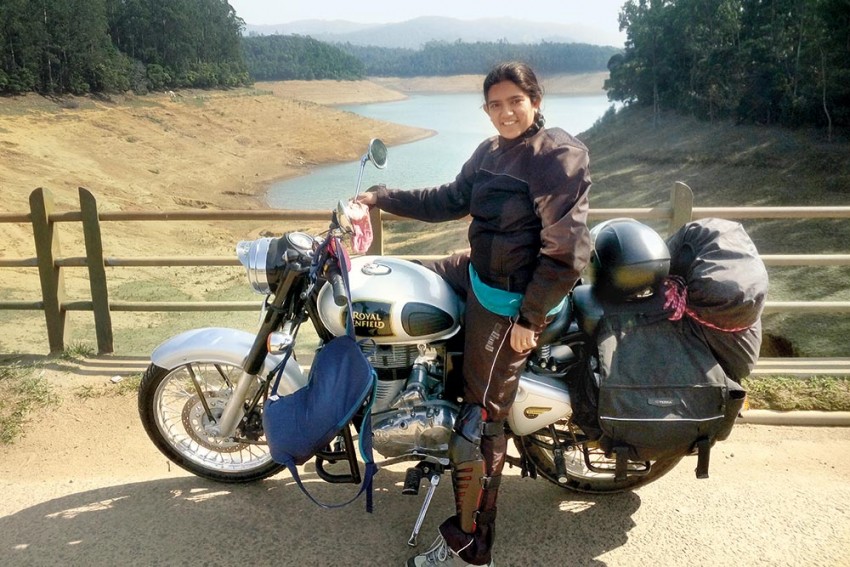 Blood Cloth
Kavya Menon, during a three-day ride to the Nilgiris while on her period, with a cloth pad drying on the bike handles
Preetha Nair December 26, 2018 00:00 IST Disposable Pads Are A Hazard, A Look At Some Alternatives 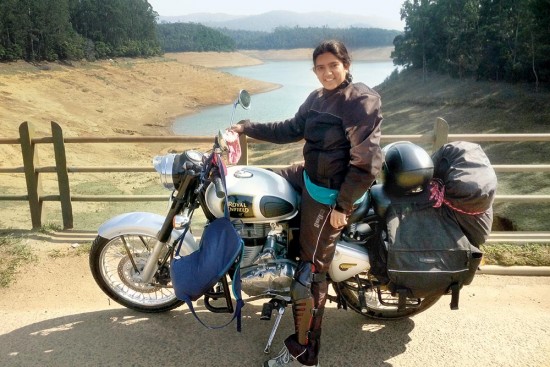 Braced against the bitter cold, riding for 18 hours each day and stopping to make camp beneath the stars, Kavya Menon completed an arduous three-day motorbike trip to the Nilgiri Hills. Accompanied by her husband and other riders, she was armed only with the bare necessities of life, including a set of cloth pads—because she was on her period. She would change and wash her pads at public toilets or petrol pumps, drying them over the handles of her bike while on the move. “The wind and the sun helped it to dry,” she tells Outlook.

Menon, a biotechnologist, had been looking forward to the ride for a long time—but, on the morning when they were due to set off, she found that her period had arrived ahead of schedule. Initially hesitant, she steeled herself and decided to carry on, ­determined to break taboos and bust myths like “don’t run, don’t ride”.

She is the founder of a Chennai-based collective that deals with menstruation, with focus areas including health rights, environmental impact, ­sustainability and economic factors. Signifi­cantly, a ­menstrual marathon launched by her NGO in Kerala has generated ­massive interest, with ­stakeholders from all walks of life joining the campaign last year.

Menon made the switch to cloth pads after learning of the huge health and environmental risks posed by disposable pads. “The plastic in disposable pads takes 500 or more years to degrade. It comes back to your system after we dispose it into water bodies and landfills. If it’s burnt, it will go into the atm­osphere,” she says. As she points out, the chemicals used to bleach pads white have been flagged by the World Health Organization as carcinogenic and a potential environmental threat.

With India’s menstrual waste estimated at 1,13,000 tonnes annually, many NGOs and groups are working around the problem of waste and the health consequences of disposable pads. According to a National Family Health Survey (NFHS) 2015–16, about 57.6 per cent of Indian women use sanitary napkins, while 62 per cent of women in the 15–24 age group still use cloth. Meanwhile, many still hold to traditional Indian solutions: scrap cloth from old saris or towels, folded and held in place by underwear or a string ‘belt’, adding a layer of sand, ash or rice husk for added protection during heavy blood flow. 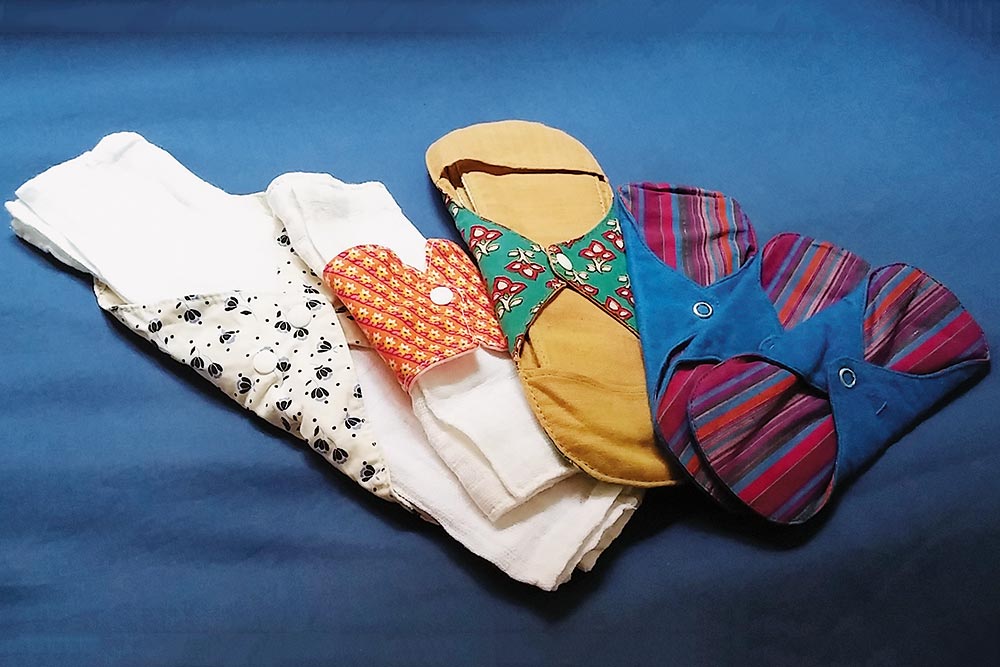 Cloth pads are a sustainable ­alternative

Poonam Muttreja, executive director, Population Foundation of India, is awake to the consequences of doling out disposable pads. Substandard pads and lack of a waste disposal mechanism will only aggravate the problem. “A few years back while I was on the government committee for distributing pads, I raised the issue of health hazards and disposal strategies. However, the government distributes low-quality Chinese pads to many primary health centres,” she says.

With such problems coming to light, many women are exploring sustainable alternatives like reusable cloth pads, menstrual cups, and biodegradable pads. With various NGOs and brands using natural raw materials such as banana, corn and others in making pads, women have plenty to choose from.

A recent convert to mens­trual cups, Trivandrum-based publishing professional Sajini Sahadevan finds it liberating. “The main reason for my switch was that I didn’t like having the bhai chaps in my apartment take my crap to burn in the incinerator along with the daily trash. It just felt cruel. This way, I wanted to ensure mine and their dignity was intact.”

Disposable pads cause both health and environmental hazards, with India’s annual menstrual waste estimated at 1,13,000 tonnes.

Gynaecologist Daru Shah, consultant, Breach Candy hospital, says that though she always recommends sustainable alternatives to ­patients, many women find it a bit tough. “There is no doubt that sanitary pads are hazardous to health. I have att­ended cases where women forget to remove tampons, leading to infections. But most of them are wary of cups and other alternatives,” says Dr Shah.  Surabhi Singh, gynaecologist and founder of Sachi Saheli, an NGO eng­aged in sensitising Delhi school­children about menstruation, feels that cloth pads are a safe bet if used in a hygienic manner.

Another social enterprise, Auroville-based Eco Femme, produces reusable clothes pads made of organic cotton. “One piece can be used for three or more years. The pad comes with carry bags with a leak-proof system for working women,” says Kalvi, a team member. Tanvi Johri, founder of Carmesi, another player in the burgeoning natural pad market, says their pads are completely ­biodegradable as they are made of corn starch and bamboo fibre. “The corn starch which makes the top sheet of the pad eliminates the risk of skin irritation, itching, or harsh rashes. The bamboo fibre makes the abs­orbent core and strengthens it, thus giving superior abs­orbency,” says Johri.

However, Anshu Gupta, founder of Goonj—the first to produce low-cost sanitary pads using clothes—says their motto is the three ‘A’s: access, awareness and availability to rural women. He feels that cups and expensive cloth pads serve only a section of the urban rich. “Today we have menstrual cups and expensive cloth pads. Are we trying to find a solution for the urban rich who can alr­eady afford Rs 500–600 a month for pads? It doesn’t solve the problems of the maj­ority rural community,” says Gupta. At the same time, he thinks the taboo around menstrual health cannot be solved simply by distributing use-and-throw pads without opening a dialogue and creating awareness. The cloth pad campaign, which started in 2004, has produced five million pads so far, and ­directly reaches out to approximately 4,000 ­villagers a year.

Then there are women who choose to bleed freely. The movement went mainstream three years ago after Kiran Gandhi ran the London Marathon while bleeding freely. Though Instagram ­removed the photo, it had to apologise after a storm broke out on social media.

Menon, who is into free bleeding, says she doesn’t int­end to make any ­statement by doing this. “I feel natural, and this is part of my identity,” she says. “At home, I don’t use anything. I put a cloth on my bed sheet and wash it later”. While many are discomfited by stained clothes and bed sheets, and refr­ain from discussing such matters, Menon says it’s time we started the “bloody talk”!