The Punjab CM gets up, close and personal 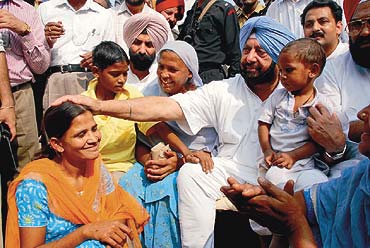 Here's how Punjab CM Amarinder Singh has suddenly become a man of the masses: In his 30-year-long political career, Punjab chief minister Amarinder Singh never really had to physically touch base with the aam janta. As the scion of the Patiala royalty, his style of governance, and his campaigning, has been regal. Largely airborne jaunts through the countryside, interspersed with brief descents to address public meetings, have been his trademark. There was an instance in 1992 when all he did was shower pamphlets on his constituents from a chopper. But now the dapper CM is embracing the toiling masses like never before. It's a spectacle watched in amazement by all of Punjab.

With assembly polls just three months away, Amarinder Singh has decided to reach out to the people with a 'vikas yatra' which will traverse a distance of about 5,800 km through all the 117 assembly constituencies in four phases. He kicked off the first phase of the yatra from the state's cotton-rich Malwa belt, a traditional Akali stronghold. "Whatever I am is because of the people. You can call me janta ka sevak. By undertaking this yatra, I am trying to know the people more closely," he told Outlook. And how closely is something the poverty-struck Malwa villagers could never have anticipated. One of the first things Amarinder did was abandon his custom-built bullet-proof bus as few could see him sitting inside it. He then jumped into an open Gypsy and from then on it was a continuous eight to ten hours of shaking hands a day.

An on-the-spot tubewell connection was there for an astonished farmer in whose field Amarinder had lunch one day. At another village, he walked into the home of a Dalit couple and asked the wife to make tea for him. Since he also gave the happy couple Rs 11,000, several other people wanted him to visit their houses too. He played with infants, gave them 'shagun', shared his lunch with a poor woman who had come to pick cotton in her field and joined a langar doling out 'makki di roti te sarson da saag' all in the course of five days of the first phase of the yatra.

The yatra also coursed along the historic Guru Gobind Singh Marg from Anandpur Sahib to Takht Damdama Sahib. Along the way the CM paid obeisance at historic gurudwaras. These were carefully chosen in line with the current Congress strategy to woo the Sikh community. Driving through fields bursting with fluffy cotton, Amarinder was just in time to see the region's bumper cotton crop. Was it some Congress workers or grateful farmers who ran to him with bouquets of cotton in one village?

But what made him change his style? The question hits a raw nerve and an angry Amarinder told Outlook, "What's wrong if I am trying to feel the pulse of the people and see their response to our policies? We have worked for the people for five years and now we want to assess our performance." He takes the same line while defending his decision to give the yatra an official status. Misusing official machinery for electioneering is an issue not worth pondering over in Punjab. The reasoning is simple, "If Prakash Singh Badal could do it, what's wrong if we do it?" In the run-up to the last assembly polls in 2002, Badal had launched the controversial 'sangat darshan' programme in which around Rs 200 crore was distributed to the people.

But even when the maharaja turns a commoner, he does it in style. So, the yatra, meant to reach out to the common man, began with elephants, decorated horses and camels in attendance. Brass bands and dhols too played at places along the route. The ubiquitous helicopter was at hand to ferry the CM to and fro from places where he halted for the night. And a cavalcade of officials followed the CM, ostensibly to attend to people's problems on the spot; they did help Amarinder collect hundreds of petitions from hopeful people. 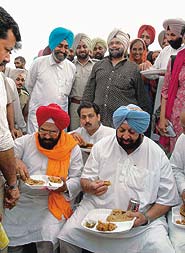 Controversy hit the yatra from day one when the state public relations department released half-page advertisements in newspapers showing the chief minister at the head of a mammoth crowd at Anandpur Sahib at the start of the show. The next day, the Akali Dal released the same picture with pointers showing morphed portions in it, where crowds from other pictures had been grafted onto the original, to present a bigger crowd. The embarrassed department has since begun an inquiry to "nail the culprit for the picture".

Nevertheless, as observers point out, Amarinder has managed to see for himself, perhaps for the first time, the desperate poverty in many of Punjab's villages. Here people have to trudge for miles to get drinking water, in some places cancer deaths due to contaminated groundwater are in epidemic proportions and debt-ridden farmers are committing suicide. When farmers like Joginder Singh wondered—"Where was he for five years?"—the whole purpose of the roadshow becomes clear. For many it is not so much an exercise to know the problems of the populace but an attempt to dispel the image of an inaccessible CM which Amarinder Singh has acquired over the last five years.

All these years, many Congressmen allege, there was a conscious attempt by Amarinder to distance not only the party rank and file but also ministers and legislators. The Moti Bagh palace at Patiala had become like an alternate capital and Amarinder did not come to the secretariat for weeks. Punjab PCC chief Shamsher Singh Dullo has publicly criticised the CM's exclusive style of functioning at party meetings. Significantly, Dullo had initially ridiculed Amarinder's yatra as he was apprehensive that the CM's style of campaigning might further alienate the people from the party, already facing anti-incumbency. He, however, accompanied Amarinder, albeit reluctantly, on the first phase which covered 25 constituencies.

But at the end of the day, call it political pragmatism or people's power, Amarinder Singh has realised that he will have to meet the humble farmer on the latter's turf if he wants to retain power in Punjab.