A divided opposition won't hit the saffron alliance where it hurts 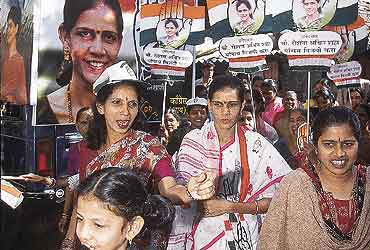 outlookindia.com
-0001-11-30T00:00:00+0553
Tensions are running high in the metropolis in the run-up to the Brihanmumbai Municipal Corporation (BMC) polls slated for February 10. The outcome of elections to the richest civic body in the country—with an annual budget of Rs 5,100 crore, higher than that of several northeastern states—will be crucial to the prospects of the Shiv Sena, which currently holds absolute majority in the BMC, in coalition with the BJP.

The poll outcome is supposed to be crucial because it will test the strength of the Sena-BJP alliance and could perhaps have a bearing on the future of the alliance. Before ticket distribution there were rumblings within both the parties, but the differences were ironed out and the alliance stuck together since the leaders of both constituents believed that staying together would give them a fighting chance. As for the competition, the Congress and the Sharad Pawar-led Nationalist Congress Party (NCP) failed to arrive at any understanding. The polls will thus also serve as a partial barometer of the individual strengths of both the Congress and the NCP.

The NCP had earlier made it known that it wanted to ally with the Congress in order to challenge the Sena-BJP combine. But the proposal was shot down by the Congress high command which was of the view that the NCP does not have sufficient presence in Mumbai. The NCP is now fighting the polls in alliance with the Republican Party of India (Athavale), while the Congress is going it alone. This has led to a three-cornered fight which could help the Sena-BJP combine. However, an absolute-majority verdict seems unlikely and post-poll alliances will decide which combine will lord it over the BMC.

That the Congress and the NCP could not sort out their differences is surprising, considering that their coalition rules Maharashtra. Many see the pre-poll bickerings as proof of the suspicion with which each party views the other. Indeed, the campaign trail saw bitter exchanges between the Congress and the NCP, which raised some doubts about the stability of the 27-month-old Democratic Front government in Maharashtra. During a rally in Nasik, on February 2, chief minister Vilasrao Deshmukh from the Congress dropped a bombshell: "The NCP does not believe in taking collective responsibility for cabinet decisions. If they want to break the alliance, they can go ahead." He later said, "Ours is not a love marriage. It is an arranged one."

The NCP responded in equal measure. Addressing a press conference in Akola, party leader and deputy chief minister Chhagan Bhujbal attacked the Congress for projecting the NCP as anti-Muslim. "Because I was clear on my support to POTO and the ban on SIMI, the Congress wants to paint me as anti-minority," he complained.

But whether the saffron alliance can retain the absolute majority it enjoys after this referendum on its performance is unclear. It goes to the polls with a record tainted by a slew of corruption charges. Sena leaders are clearly nervous about the saffron alliance's prospects. Party leader Uddhav Thackeray personally supervised the distribution of tickets to party candidates, denying nominations to over 50 sitting corporators. This has led to considerable resentment.

Besides the anti-incumbency factor, the saffron-coloured municipal government faces charges of financial mismanagement. The BMC's deficit, under their regime, has soared to an astronomical Rs 645 crore. The S.S. Tinaikar committee, appointed by the Deshmukh government last August, had recommended the BMC's dissolution on grounds of financial mismanagement. The committee had also found irregularities in the sale of old BEST buses to the Avani Trust headed by Uddhav.

The Congress also has its share of internal problems. Insiders say that differences between state Congress chief Govindrao Adik and the chief minister have weakened the Congress campaign.To top it all, Adik's been accused of sexual harassment by a party worker on the eve of the election.

Currently, the Sena is the single-largest party in the BMC and a wide margin separates it from the others. Of the 221 elected seats, it claimed 103 in the last elections held in 1997. The BJP had 28 seats, enabling the alliance to wield absolute majority. The Congress and the NCP claimed 28 and 22 seats respectively.

As the city goes to the polls, it is clear that in order to put up a sustained opposition to the saffron hold on Mumbai, the opposition parties need to put their internal differences aside. Right now they seem to be only keen on slugging it out.

Devshakti provides training, and secures a future for local women