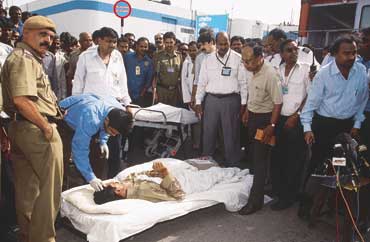 outlookindia.com
-0001-11-30T00:00:00+0553
It is January 22 evening and the Pakistani acting high commissioner in New Delhi, Jalil Abbas Jilani, is getting ready to leave for Rashtrapati Bhavan to attend a reception to which heads of diplomatic missions have been invited. The phone rings, it's from South Block: could Jilani come over to the ministry of external affairs? He answers he has a reception to attend; South Block tells him they would wait for him later in the evening.

The reception winds up at 6 pm. A little later Jilani is in joint secretary Arun Singh's office. (Singh deals with Pakistan.) It's a matter-of-fact meeting. Over the next 30 minutes, Singh delivers two notes verbales to the acting high commissioner. These say that four people in the Pakistan high commission have been "indulging in acts incompatible with their diplomatic status" (officialese for spying), that they have 48 hours to leave India. Through this act Singh hopes to convey to Islamabad that New Delhi is prepared to play Pakistan's game of brinkmanship.

The current round of bickerings and sniping at each other had begun, innocuously enough, on January 7. Then Jilani had delivered a note verbale to South Block saying that "lately the surveillance of the flag vehicle being used by the acting high commissioner has been increased to such a level that it can be simply termed as harassment". It sparked a string of retaliatory actions, snowballing into a crisis on January 18.

On that day, the acting Indian high commissioner in Islamabad, Sudhir Vyas, and his wife Vasundhara had been invited to a diplomatic luncheon at the Malaysian high commission. As Vyas' flag car started out, he found his way blocked by a car parked diagonally at the gate. That was just the beginning of a harrowing drive for Vyas and his wife.

"We got stuck there," Vyas told Outlook. "Our destination was just 5 km away, a distance we normally would have done in some 10 minutes. But that day we took about an hour to get to the official engagement." The Indian flag car would move haltingly, dependent, as its driver was, on the speed of the vehicle ahead. Vyas encountered this, again, on his return and later in the evening. "For three days thereafter," Vyas said, "it was aggressive surveillance. There was a car on either side and in the front and back, changing speed, braking suddenly with the intent of throwing us off balance."

This surveillance on Vyas became less aggressive following the expulsion of four Pakistani diplomats. But not before the Pakistanis retaliated in Islamabad. At 3 pm, January 23, Vyas was called to the Pakistani foreign office and delivered two notes verbales, expelling four Indian officials from the country. In effect, this tit-for-tat game downsized the two respective high commissions further.

But what sparked this current round of brinkmanship? Indian government sources say two days after Jilani had delivered his protest note, he had dashed off a report to Islamabad claiming that surveillance on him had been increased to an extent that he found it difficult to meet his sources and contacts freely, that a similar pressure on Vyas could bamboozle New Delhi into backing off. Jilani told Outlook: "On January 4, I went to lunch at the Taj Palace Hotel with a friend. The sleuths followed us into the restaurant. On another occasion, they followed me into a bookstore to find out the books I was buying."

But New Delhi has its own logic for increasing the surveillance. "Pehle to bade aaram se yeh log (Pakistani high commission officials) ghoomte the (Earlier, these people would move around quite freely)," explains a senior source. "Hurriyat types who visit him (Jilani) started to complain that they were under observation. Visits to his place decreased and his work began to suffer.The Pakistanis had to resort to unstructured meetings, chance encounters and what have you. Consequently, he thought of the note verbale to mount pressure on us. Unfortunately, it has backfired on him."

But Jilani counters, arguing that the surveillance on him and his staff was more than obtrusive. The Pakistani high commission provided Outlook 16 instances of harassment between March 2, 2002, and January 17, 2003. In one graphic instance of narration, high commission sources claimed that on April 16, 2002, for instance, Ali Abbas, a high commission official "while going to Aashlok Hospital for medical check-up was abducted by 12 Indian intelligence operatives. He was severely beaten up on the spot and was later taken to an undisclosed location where the operatives shoved an electric rod into his rectum and gave him electric shocks. He was hospitalised for passing blood in his urine. A medical report from the Indraprastha Apollo Satellite Clinic confirmed extreme physical torture. A sum of Rs 12,000 was also snatched from Abbas".

But Abbas' experience seems almost kid-glove treatment compared to what A.K. Khanna endured in Islamabad three days later on April 19, 2002—he was abducted and mercilessly thrashed. Or what happened to Kulwant Singh, who was abducted on June 1, 2002. Singh narrated his experience to Outlook: "At around 10 am, I had gone to the mission with my 10-year-old son Rahul. When I was near my home, I was waylaid by 10 people, driving in cars and riding bikes. My son ran away. I was beaten and thrashed. They then bundled me into a car and took me to a jungle. There the beating continued; they didn't ask me anything."

Singh was taken to the basement of a building. His hands tied, his tormentors kept asking him whether he was a jasoos (spy). He lost consciousness three times. Around 6.30 pm, he was dumped at a police station. The police called the Indian mission and Singh was admitted to the Pakistan Institute of Medial Sciences. Three days later, with the permission of the Pakistani foreign office, his family along with a medical officer left for the Wagha border. But 25 km outside Lahore, they were sent back to Islamabad. They embarked on the same journey again on June 6 and, this time, reached Amritsar. He was brought straight to the All India Institute of Medical Sciences in New Delhi. "Till June 18, I was there. Even now my back hurts from time to time," says Singh.

What Indians and Pakistanis do to each other's diplomats match in brutality—and also statistics. Between March 2, 2002, and January 17, 2003, Indian officials in Pakistan encountered 22 instances of harassment, about the number of incidents the Pakistani high commission claims to have endured here. And it is also an annual feature: in 1999, the Indian mission in Pakistan recorded 18 instances of harassment, intimidation and torture, 22 in 2000, 17 in 2001, 17 in 2002 and seven till January 23 this year. It seems 2003 could become a veritable nightmare for foreign officials.

An official has to be a masochist to look forward to a stint in Pakistan. When Pakistan expelled four Indian officials last week, a senior diplomat remarked, "You can write that those who have been expelled are celebrating and those who were hoping to be expelled but missed the bus are in deep depression." Adds another diplomat, who has had a taste of the isi's courteous ways, "Pakistanis enjoy their lives here and make our lives miserable there."

The blocking of Vyas's car wasn't the first. Way back in July 1994, when Francis Vaz (a diplomat) and his wife were returning from a dinner hosted by the second secretary, they found themselves boxed in by a phalanx of cars and motorcyles and herded around the city from 9.30 pm to 3 am. Recalls a diplomat: "The then high commissioner, Satinder Lamba, called up everybody in the foreign office and threatened to call in foreign journalists to witness this drama.It was such a hue and cry that the Pakistani chief of protocol had to rush to Lamba's house to defuse the tension."

The current round of intimidation has its own irony—Jilani's and Vyas' tenures have run their course. A replacement for Vyas has been named (T.C.A. Raghavan) but Islamabad has sat on his papers since July last year. So, when Jilani's successor (Munavar Bhatti) was named in November last year, New Delhi too decided to delay processing his papers. Pakistan now apparently wants simultaneity in the clearance of the papers, neither being able to satisfy the other.

"The truth is," says one diplomat, "our mission there has outlived its usefulness, if we are to go by the characterisation that Pakistan is a state that sponsors terror. All we do there is collect second-hand gossip from the diplomatic circuit. If Pakistan is promoting terror, then we have to treat it like a terrorist state. Why are we wasting our energies every day determining how to deal with the nuisance? Throw their diplomats out, all of them, and recall ours."

There are many takers for this line of argument. But, ironically, say many government sources, the very political class that lambasts Pakistan for sponsoring terrorism is shying away from matching its rhetoric with act. And this because it doesn't want to be dubbed a spoilsport in the region. "It is like being in a popularity contest. If you stop grinning and bearing it, you would be declared a loser," says a source, throwing up his hands in absolute exasperation.