Shut after 1947, the viceroy's kitchen reopens once again 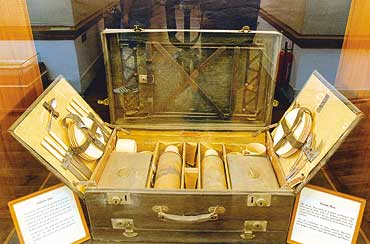 outlookindia.com
-0001-11-30T00:00:00+0553
Big-bellied copper pots to prepare pintfuls of steaming turtle consomme. Metal cutlet bats to tenderise beef into butter-soft filet mignons. Gleaming silver salvers to carry in main courses like quail stuffed with grapes for banquets at 'Viceroy's House', as Rashtrapati Bhavan was known before Independence. These were the 'imperial measures' used in the kitchens and dining rooms of the Crown and all her colonies, which faded from sight with the end of the Raj in India.

Within Viceroy's House, the largest palace built in the 20th century, the banquet table was the heart of the house, seating a hundred people, and laid with crystal stemware and fluted turquoise plates embossed with the viceregal insignia. Here, for about two decades, khansamahs, masalchis and butlers created repasts for the viceroys of India from Lords Irwin to Mountbatten. 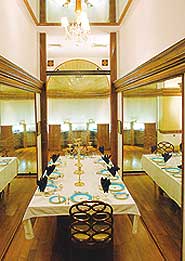 Retrieved from the stores of the President's Estate, this custom-made dining-room paraphernalia of pre-Independence India has just gone on display at Rashtrapati Bhavan's Kitchen Museum. Housed below the great dome, it is at President Kalam's behest that these objects have been thrown open to the public. The exhibits roughly cover the period from 1911—when King George V and Queen Mary, at their Coronation Durbar, announced that the capital would move from Calcutta to Delhi—to 1947. In terms of culinary trivia, the 1911 coronation was a high point in British cooking, when legendary chef Auguste Escoffier's menu in London included caviar, turtle soup, roast chicken George V and Peaches Queen Mary. By 1948, just before Queen Elizabeth II's wedding, standards had plummeted with British food writer Marguerite Patten demonstrating the 8-Minute Doughnut on bbc for homemakers in post-war England, still facing rationing and food shortages.

With the opening of the third museum on the presidential estate, Kalam is getting closer to his vision. Says S.M. Khan, the President's press secretary: "President Kalam wants this to become a people's palace." Kalam has already opened the Herbal Gardens, where farmers and scientists can learn how to extract properties from plants, a Tactile Garden with embedded pebble paths for the visually challenged, a jatropha plantation to harvest biodiesel, a Biodiversity Park, children's museums and musical fountains.

Kalam's culinary initiative—though his tastes don't stray from simple South Indian vegetarian staples like curd and rice—is winning praise. Lauding Kalam's concept, Aman Nath, author of Dome Over India, a revisionist history of this Lutyens-designed palace, says: "The idea of a Kitchen Museum is brilliant." Sunita Kohli, Lutyens expert and honorary designer for Rashtrapati Bhavan from 1985-89, says: "I believe the incumbents are only tenants. The building belongs to the country." Describing the historical worth of the collection, she says: "These are the largest Edwardian kitchens in the world."

And it's not just the museum; the setting within this heritage edifice distinguishes the experience. Architectural historians call Rashtrapati Bhavan "a double magnificence" as it's the first time the world has seen a perfect synchronisation between eastern and western styles of architecture, with Lutyens' conceptualisation of a new architectural order, The Delhi Order.

"I have spent the last two years in the basement retrieving objects and classifying them," says K.T. Ravindran, designer of the Kitchen Museum, also professor and head of Urban Design at the School of Planning and Architecture, New Delhi. After being selected by Ravindran, the brass and copper vessels were tinned, silver polished and the crystal brought to sparkle before being put on display. The selection that guides viewers from the viceregal kitchen to the banquet table begins with fascinating prep implements like industrial copper ladles, primitive slicers, utensils like bain maries and a brass coffee maker. It then moves to the accoutrements of formal dining—the crystal decanters, engraved silver entrée dishes, bone-handled game carving knives, trident-shaped bread forks, and an elegant crumb scoop.

Among the most popular displays are formal frippery like dainty silver pickle spoons, grape shears and asparagus tongs. Also, a wooden picnic hamper with six locking systems fitted with a waterproof cloth, teacups, cheese knives and even a jampot. Given pride of place under a tiered chandelier is the Star of India crockery, with crystal stemware and shining silver cutlery set at a table designed by Edwin Lutyens. A post-prandial selection of cigar cutters, cigarette boxes and liqueur glasses completes this viceregal dining experience.

Thoughtfully designed, with ramps for wheelchair access, and labels in Braille, the museum also has walls padded and covered in raw silk to absorb noise. Echoing recurring motifs from the building, the display cases have circular wooden mouldings, adapted from Lutyens' favourite flourish, the circle, as seen in "the ogling sandstone eyes" over the entrances and exits, on the circular chairbacks and the whimsical round spectacles recreated in stone which lead onto the gardens.

Sadly, the men who served in the viceregal kitchens—the insiders, who can chronicle the undersides of history—are missing . They include abdar, or barman Aley Ali Khan who joined service here under Lord Mountbatten. In Dome over India, he says, "we used to do a double salaam to the Lord sahib. I have not seen this anywhere else. The English were very strict—we used to call it 'kaidkhana' jail. Our working hours improved only after Independence. Earlier, we used to serve all three meals, now we work eight hour shifts." Now retired, it is people like Aley Ali who would make the best guides to this Kitchen Museum. Call 011-23015321 to fix a visit, and you too can savour his masala morsels of history.