Celebrity-owned foodcourts to schmooze in 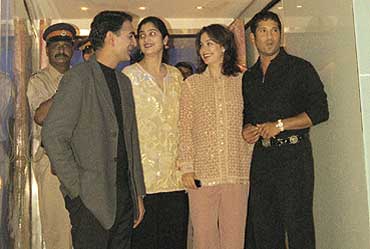 outlookindia.com
-0001-11-30T00:00:00+0553
The hotel boom may be quite over, prompting the finance minister to announce a slew of sops to boost tourism. But the sun and the moon have been shining unaided on the food service business, including bars and pubs, giving the five-stars a tough run for their vineleaf dolmas and authentic seaweed. Suddenly, it's the business to be in, and seen in, and celebrity restaurateurs are dime a dozen.

Delhi is catching up—the late Congress leader Rajesh Pilot's children run grill-cum-bar Suede and eclipsed cricketer Ajay Jadeja is one of the four partners of Senso restaurant. Painter Satish Gujral's son and architect Mohit has invested Rs 20 crore in a highway diner chain Mama's Kitchen, the first of which has come up near Kasauli in HP. Seafood exporter Vikram Thapar is moving into a Rs 50-crore chain called Tiger Bay opening in June in Bangalore followed by Delhi. Even Saurav Ganguly wants to start a restaurant chain.

As its image of a recession-proof business sinks in, celebrities and P3Ps are latching on as flies to honey—their brandnames lend the bit of glamour that's just so crucial to haul the joint onto the lush level of the champagne set. Or is it the other way round?