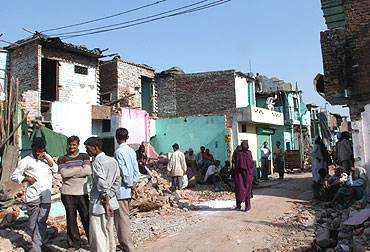 It is early days yet for the new UPA government to make any path-breaking policy announcements. But it is reliably learnt that work is on to give shape to an urban poverty alleviation scheme. Sources said officials in the ministry of urban development and poverty alleviation are waiting for President Pratibha Patil to make the formal announcement in her address to Parliament before they draw up a road map for the new scheme. "Unlike NREGS, the scheme for the urban poor will not address the problem by offering an employment guarantee. Instead, it will focus on developing skills through self-help groups and communities," an official said.

Sources in the ministry also say that, as the majority of the poor are employed in the informal sector, special schemes are being planned for them. These include health insurance, education subsidy, and imparting specific skills, such as in the use of computers and in the marketing of traditional craft products, skills surrounding which floating populations often bring when they migrate to cites. "The thrust will be to increase the accessibility to services offered by the government," sources said.

The setting up of self-help groups will also be in focus. This will help groups of people better themselves through enterprise and the acquisition of skills, and with several individuals pitching in, new small-scale enterprises, trading platforms or services can be created. The government plans to help set up such groups. So it will be a "we will help you help yourself" kind of package.

There's nothing new about plans to alleviate urban poverty. In its previous term, the UPA government had thought of a Rs 10,000-crore urban employment scheme covering 10 million families below the poverty line. A plan was also worked out by the National Commission for the Unorganised Sector. About Rs 6,000 crore was earmarked for wages and Rs 4,000 crore for skill development. Broadly, the government had aimed at making a one-time expenditure of Rs 10,000 per person. But the current thinking is that merely providing employment guarantees will not do. Says a ministry official: "We don't think providing employment alone will work, for poverty in urban areas has more to do with having access to services like housing, water supply, medical care, education and so forth. It is with this in mind that the government is proposing to launch a slew of schemes addressing these issues."

But who are the urban poor and what are their numbers? The Planning Commission estimates the urban poor at 80 million, in comparison to the rural poor, who are some 120 million. Two studies—by the World Bank and the Asian Development Bank—had fixed the required minimum daily earning at $1.25 and $1.35 respectively per person.

A new framework to assess urban poverty was arrived at by the Office of the Commissioners to the Supreme Court, the Planning Commission, the National Commission for Enterprises in the Unorganised Sector (NCEUS) and NGOs last year. The consensus was that income alone cannot serve as a yardstick of poverty. For, by that token, Delhi has one of India's highest per capita incomes (Rs 66,728 per annum, against the national average of Rs 29,642), but it also has 15 lakh poor. It was also noted that place of residence alone does not automatically qualify someone as poor. Occupation, nature of employment, whether casual or self-employed, wages, health—all had to be factored in.

So when will Manmohan Singh play his urban trumpcard? It may not happen immediately, given the huge fiscal deficit. But the programme will certainly take off, say officials in the urban development ministry.

One Li'l Piggy In The Bank