Forget the Green Revolution. India's hinterland is increasingly ploughing the circuits of the electronic world to reap a brand new harvest. 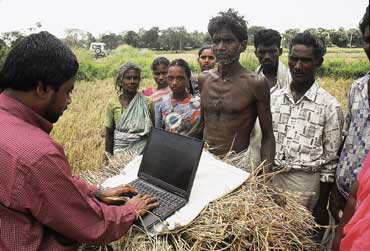 That was when he was on the verge of giving up plans of going to college for a degree in history as he had no money to buy books. That was also when the Madhya Pradesh government began a project called Gyandoot to fund rural networked cyberkiosks through panchayats in backward Dhar to offer villagers a range of services through an Intranet based at the district HQ. A curious Govardhan qualified during a fortnight-long training of village boys in operating a computer. He became the first soochak (coordinator) or manager of a soochanalay (information centre) as these kiosks are called. These days, he's running the booth, studying for his first year college exams and plans to take a diploma course to learn more programs. "The more you learn about this machine, the more you earn," says Govardhan. "It benefits both the operator and the user of the information it generates. Isn't that wonderful?"

Some 1,700 km away, in Pondicherry's Veerampattinam, a fishing hamlet on the shores of the Bay of Bengal, G. Balaraman is preparing to set out for the day's trawling. But unlike his father, he won't be scanning the skies alone to hazard a guess about possible storms. Suddenly, the loudspeakers dotted around the village crackle to life, announcing the weather forecast. The announcer also gives details of the tide, wind direction and height of the waves. This is part of a two-year-old project started by the Chennai-based M.S. Swaminathan Research Foundation to transmit critical information to six villages in the area. "Now we are always prepared," says Balaraman, before setting sail. "The information is very useful during rough and stormy weather."