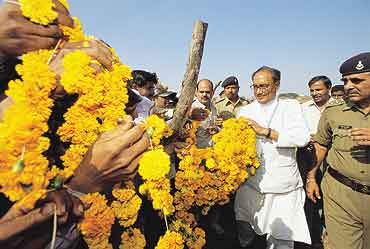 Turbo-charged, all cylinders firing, Madhya Pradesh chief minister Digvijay Singh is burning up the campaign track in the last lap of the electoral race. Subsisting on a three-hour nap and one light meal a day, he's in constant motion; pressing hands, rocking the voters and mocking the opposition.

But hyper-activity aside, Digvijay Singh still doesn't look like a winner. He's more the embattled defender. But so potent is the Diggy mystique that Congress workers, while admitting the trend of public opinion favours the BJP, believe that the Raja will somehow pull it off a third time. Diggy makes light of his near-legendary infallibility. "Do you see a halo?" he jokes.

In election-obsessed MP, one meets two kinds of people: those who tell you it's a tough fight and those who say the BJP is winning. The former, in deja vu mode, remind you that the electoral 'hawa' was blowing unmistakably BJP-wards in 1998 too. All the surveys predicted a clean sweep. But psephologists had egg on their faces when Diggy Raja was sworn in for a second term.

But things are different...