The Bajajs have stuck together for four generations and made it big. But their dream run seems to be coming to an end. 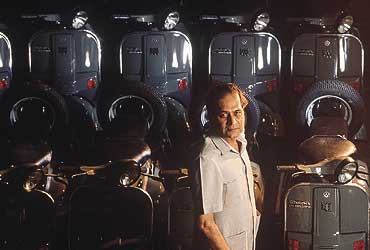 outlookindia.com
-0001-11-30T00:00:00+05:53
The cover pic of a young Rajiv Bajaj kneeling at his father Rahul's feet on a business magazine cover in 1993 tacitly put to rest all queries about the succession plan in Bajaj Auto, the flagship company of the Bajaj family. The Rs 6,000-crore business empire with interests in two-wheelers, electricals, sugar and steel is parcelled equally between five active members—Rahul and Shishir, the sons of Kamalnayan, and their three cousins Shekhar, Madhur and Niraj (Ramakrishna Bajaj's sons)—and like all family-run business operations, inheritance has been a thorny issue. In the past, the family has had closed conclaves to thrash out the blueprint of the future, but it's always been private.

Rahul Bajaj, the eldest in the family, has been quite candid over the issue: "If one guy wants to, he just goes. And if the four don't want to give him anything, he doesn't get anything but for his wealth in accordance to his share.... He can't get Bajaj Auto."

That's precisely the problem. With most of the companies in the stable—Mukand Ltd, Bajaj Electricals or Hercules Hoist—bleeding or with insignificant market capitalisation, the tussle had to veer towards the two-wheeler giant. The faultlines are public as 55-year-old Shishir Bajaj wants to part ways with the rest of the pack, offloading his stake in the group companies, including the flagship, in lieu of consolidating his holdings in the three companies—Bajaj Hindustan, Bajaj Sevashram and Deccan Ayurvedashram Pharmacy—that he manages. In short: clear the way for son Kushagra.

Let's get our perspectives right to fathom the cross-holdings: each of the five men has one-fifth of the family stake in each of the 25 companies. Although Rahul Bajaj singlehandedly led Bajaj Auto to be the jewel in the crown, generating 80 per cent of the topline and almost 90 per cent of the total profits, his equity share in the company is the same as that of the other four. Similarly, Rahul's sons Rajiv and Sanjiv may well be the president and the V-P (finance) respectively, but they do not own the company.

Thus, if the divorce goes through, Shishir will sell his stake in all the companies which he does not own and consolidate his shareholding in his own companies. But here's the catch: Bajaj Auto's Rs 5,198 crore m-cap is infinitely larger than that of Bajaj Hindustan's at Rs 58 crore. Moreover, while the overall promoters' stake in Bajaj Auto adds up to 45 per cent, the family's stake is actually 25 per cent. The rest is with associates, Rahul Bajaj's sister Suman Bajaj Jain, a handful of charitable trusts and the Viren Shah family. Thus Rahul Bajaj has to shell out Rs 260 crore at current prices to buy out Shishir from Bajaj Auto while Shishir has to pay only Rs 23 crore to acquire the stake held by his brother and cousins since the promoters' stake in Bajaj Hindustan is 50 per cent.

After four generations of co-existence, the buland tasveer is probably in shreds.

Naturally, last week's been stressful: Rahul Bajaj underwent an angiography due to "unwarranted stress" and Bajaj Broadcasting Corporation, as he is referred to by wags in the media, has been unusually taciturn. "In essence, the split seems imminent, although as the head of the family, I'm against it," he told Outlook, "But finally, it's Shishir's call." The truth is, now even he would prefer a division but with minimum acrimony. Clarifies a cousin of Rahul: "It's not a vertical split but a separation of sorts. We three brothers are with Rahul and will remain so."

As of today, Rahul and Shishir control around 26 per cent and 21 per cent of the total family wealth. The remaining 53 per cent is owned by Shekhar, Madhur and Niraj. "We have an absolute majority and can throw out Shishir if we want to. Even the financial institutions will support us in a showdown," barks a cousin.

Shishir's friends feel the problem's root lies in Rahul and his wards "hogging the limelight in Bajaj Auto". Kushagra, says an associate, feels overshadowed, and the situation is aggravated by the meteoric rise of brother-in-law Kumar Mangalam Birla.

Nobody dares question Rahul Bajaj's leadership. But even his confidants have been privately apprehensive about the choice of the heir apparent for the flagship. Interestingly, Madhur Bajaj is vice-chairman and executive director in Bajaj Auto with no company of his own. Insiders remain anxious about the working relationship between Rajiv and his uncle.

Naturally, the opposite camp is cashing in on this. Shishir and his sons have always been kept away from centrestage, argues his camp. Even Suman Bajaj Jain has been closer both in business and affection and today her twins Anurag and Tarang supply components to Bajaj Auto. The sister also wields considerable clout in the Jamnalal Bajaj Charitable Trust.

"Bajaj Auto can't be Rahulji's family fiefdom. He has to accommodate the next generation who are equal shareholders," says a source. Kushagra, he says, has worked with Bajaj Auto but is today saddled with second-rung companies. Naturally, his father may well wish to hand over a sizeable asset-base possible only by a split. Sources say Shishir also made an unsuccessful demand for either a split into two of Bajaj Auto with control over the cash-rich investment arm, or a sum of Rs 550 crore for his stake in the group. He was equally interested in gaining control of charitable trusts which have a total corpus of around Rs 400 crore and equity in the group flagship. Naturally, the motive was to augment his negotiating powers and boardroom manoeuvrings.

Amid these tensions comes the latest salvo. Shishir's camp now alleges that with no legal rights to it, Rahul Bajaj is eyeing the substantial streedhan (daughter's inheritance) that Kushagra's wife Vasavdatta received from her father Aditya Birla. In his typical dismissive fashion, Rahul Bajaj may have rubbished the allegation, but at the very least, the allegation indicates how far the venom has spread in the family.

A Kellogg Business School survey quoted by the CII points out that barely 3 per cent of family businesses survive the third generation. The Bajaj kin have done one better, stayed and made money together for over a century. By nature, Rahul Bajaj is a fighter. But this could be the biggest battle this former boxing champion of Cathedral and John Conan school has ever faced.