Forget getting exhilarated, the film is a frantic roller-coaster ride from which you emerge exhausted, with a massive blur in the head. 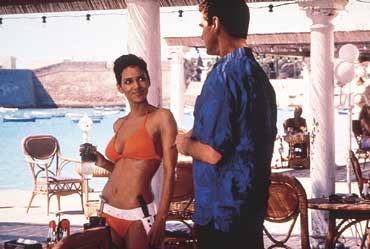 Viewing the 20th Bond is like eating from a platter spilling over with an assortment of dishes. But, in the insipid hodge-podge, not even one taste manages to linger on. The latest Bond director is Lee Tamahori for whom a Bond film is an "impregnable fortress of filmmaking". He may have made that crucial, flamboyant inroad into Hollywood, but it also marks an unavoidable break from his far more original and powerful Maori family saga, Once Were Warriors. According to Tamahori, a Bond film "used to be about girls, gadgets and a good-looking spy, and then it changed shape. It's now about girls, gadgets, a good-looking spy, and big action." That's precisely the problem: there's too much of big action.

Our good old Bond saves South Korea and the world from being taken over by the maniacal North Korean Colonel Moon, who, when not gritting his teeth, undergoes gene replacement therapy to metamorphose into an even more fiendish Gustav Graves. There are all the trademark exotic locales (we rush from Korea to Brazil to England to Iceland and back to Korea), high-tech weapons and gadgetry (an invisible Aston Martin), glittering conflict diamonds and gorgeous girls. But before you notice them, far too many minefields explode, impossible stunts get more incredible by the nanosecond and the outrageous chases move from hovercrafts to modified cars, on snow, waves and in the air.

There's been more to Bond than the digitised, technology-bending adventures. Sadly, the (in)famous witticisms and one-liners get so rare (some silly jokes about Fidel "Castrota", Big Bang theory, the Double O in 007 and "sex for dinner, death for breakfast" don't suffice) that they are in danger of going extinct by the time the 21st Bond rolls out. 007 doesn't get enough time to be suave and smooth either. In fact, for a while he sports long hair and a beard, looking like some actor auditioning for the role of Jesus. It's the babe with an attitude, American agent Jinx (Halle Berry), who not only makes for a "magnificent view" but packs in some style, the length and depth of her role notwithstanding. In a blink-and-you-miss-me role, Madonna says: "I've come undone", that too in her deadpan worst. And her Bond song is definitely nothing to sing about.