A Sharjah repeat it wasn't to be. Also, Pakistanis and their media have mostly laid off the blame game. 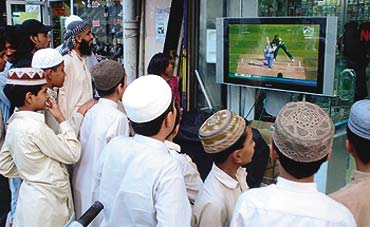 On the TV screen, the ball begins its downward spiral. Below stands Sreesanth, the heart stops, the catch is taken. And now, we Pakistanis know: history repeats itself, first as victory, then as tragedy. Lahore plunges into gloom, as do other cities in Pakistan. Disappointed cricket lovers burn the effigies of Shahid Afridi and Younis Khan in their hometown of Peshawar. A gaggle of teenagers shout slogans against them in Karachi. Grief over the defeat has united Pakistan, President Pervez Musharraf's despotism forgotten for the night.

The anger is shortlived. What overtakes the people is a numb ache, a certain wistfulness. Agha Khurram runs a tea stall at the Lahore railway station. He says to those around him: "God knows what was in Misbah's mind when he played the last shot. It was a nightmare." It's taken a while for Salma Saleem and her three children to come out of the shock. "The defeat wasn't easy to digest," she later said. Others replayed Misbah's fatal shot in their minds, readjusting the stroke or the field or the trajectory of the ball as a psychological mechanism to reconcile themselves to the irreversible reality of Johannesburg. "It could have been Pakistanis, not Indians, doing the victory lap had the boys kept their nerve when it mattered the most," former captain Javed Miandad told Outlook.