He supported the JKLF, and helped train militants. Thanks to Yasin, Sheikh Rashid's dirty secret is out. Updates 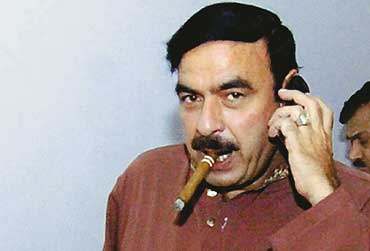 outlookindia.com
-0001-11-30T00:00:00+0553
It's perhaps easier to persuade the militant to eschew violence than to imbibe in him the ethos of popular politics demanding doublespeak and concealment of the unsavoury past. Proof of this was provided at Islamabad's Marriott Hotel at the June 13 inauguration of a photo exhibit. Present were Pakistan PM Shaukat Aziz, information minister Sheikh Rashid Ahmed, chairperson of the Human Rights Commission Asma Jehangir, who inaugurated the exhibition, and a clutch of Kashmiri leaders. And then began speaking JKLF leader Yasin Malik, who had crossed the Line of Control (LoC) in the 1980s to train as a militant and subsequently became a votary of non-violent politics.

Yasin Malik said, "(Information minister) Sheikh Rashid has played a great role for Kashmir's liberation. He used to support the frontline jehadis from Kashmir, but few know of his contributions." Perhaps, in the euphoria of reliving the past, or overwhelmed by gratitude (or, indeed, pique), Yasin went on to spell out the Sheikh's role in Kashmir's militant movement: it was at the information minister's farmhouse that some 3,500 Kashmiri jehadis, including Yasin, received training in arms. From the reformed militant leader's perspective, there obviously couldn't have been a better compliment to shower on another Kashmiri before an august audience. But the politician in the irrepressible Sheikh realised that even in these days of Indo-Pak bonhomie, it isn't possible to accept as minister a man who could have trained 3,500 militants. When journalists questioned him, he tersely remarked, "I have no idea about which Sheikh Rashid he (Yasin) is speaking."

This prompted the newshounds to turn to Pakistani journalist Hamid Mir, who's known to have close links with the Kashmiri leadership and attained fame for his interview with Al Qaeda leader Osama bin Laden. Mir said, "Yes, according to the information I have, Sheikh Rashid's Rawalpindi farmhouse was dubbed Freedom House and used to be a hub of Kashmiri activists belonging to the JKLF. The camp was operational from 1988-90 to train JKLF cadres and Sheikh Rashid accompanied JKLF leaders, including Yasin, to the LoC several times. The camp's existence was known to high officials in Islamabad."

The next day Yasin Malik retracted his statement, claiming the media had misquoted him. The Sheikh issued a statement, insisting it had never been his policy to train militants. "I am a politician, not a militant, and strongly support the Indo-Pak peace process," he added.

A retired intelligence official told Outlook that late Ashfaq Majeed Wani was in charge of Freedom House, the Sheikh's 20-acre farmhouse in Fateh Jang, Rawalpindi; and it was the ISI, then under Lt Gen Hamid Gul, which established the facility. But the former official claims the "liberation of Kashmir" may not have been the Sheikh's sole motive. "There were those in the intelligence who believed that he had actually rented out his farmhouse to the ISI for a hefty sum of money. And Yasin, who lived in Rawalpindi's Tinch Bhatta area then, was a frequent visitor to Freedom House," he said. 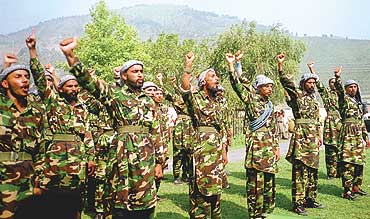 As journalists dug up the Sheikh's past, the Pakistan People's Party spokesperson Farhatullah Babar confirmed Yasin's statement: Freedom House was a militant training camp. Subsequently, the PPP issued a statement saying, "In 1989, the PPP government had learnt that the ISI, without the government's clearance, had given to then Opposition member Sheikh Rashid hundreds of acres of land in the suburban areas of Rawalpindi. The PPP government had also learnt that this land was given to him to support the Kashmiri groups." He said the PPP government was, however, sceptical about the claim and did not buy this argument. "But, as the military was under the President, there was little the government of the day could do about it constitutionally".

Since only 20 acres of land was used to train militants, Babar has alleged that hundreds of acres of land were given to the Sheikh for some "collateral purposes". Claiming that the "training camp story was anything more than a decoy to divert state funds to favoured political leaders to overthrow democracy", the PPP has now demanded an inquiry into the Sheikh's role in training militants.

Confirmation has come from other quarters as well. Hamid Mir, of the Geo Television Network, says he talked to the interior minister of the Benazir government (1988-1990), Aitizaz Ahsan, on June 15, two days after Yasin tossed the bombshell at the Marriott Hotel. Mir quotes Ahsan as saying that Yasin was "100 per cent correct" in claiming that Freedom House used to be a training facility. 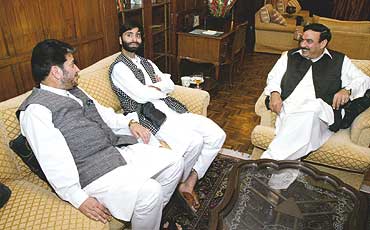 Sources say the ISI decided to shut Freedom House as the establishment chose to back armed Islamic groups, instead of secular groups like the JKLF. This was when the ISI put its formidable weight behind the Hizbul Mujahideen, the Jamaat-e-Islami's armed wing. Sheikh Rashid did not have good relations with the Jamaat, and Freedom House fell out of favour.

Those close to the Sheikh, however, say he has drastically altered his mindset since the Zia days. "There is a hell of a difference between the Sheikh of the early 1980s and the Sheikh of 2005," says a close friend. He says that as a Kashmiri from the Valley, Sheikh Rashid was an ardent supporter of the JKLF which had received an impetus under the military regime of Gen Zia-ul Haq.

The controversy couldn't have been more inopportune: he was planning to travel to India's Kashmir on the Muzaffarabad-Srinagar bus on June 30. There's much speculation here on whether or not the Sheikh will make the journey to Srinagar, from where his family had migrated decades back. Should he decide to not alter his travel plans, the other crucial question is: will the Indian government grant him permit to visit his 'homeland'?

Mir, however, feels the Indian government should allow the Sheikh to visit Kashmir. "No doubt the Sheikh believed in liberating Kashmir through an armed struggle. But, today, he believes in resolving the ever-lingering Kashmir dispute through bilateral dialogue."

Many here believe the Sheikh has a penchant to change his ideology and political affiliations. Earlier known as Farzand-e-Rawalpindi, or son of Rawalpindi, the Sheikh had served as information minister in the Nawaz Sharif government. He was elected to the National Assembly on the Pakistan Muslim League (Nawaz) ticket in the 2003 election. Subsequently, though, he shifted his allegiance to the ruling PML(Q), and earned the sobriquet of Lota of Rawalpindi. A vessel used for ablution, lota is a derogatory term used for political chameleons.

For Those Positive Vibes