Did Di Do It? Ask Jeeves

A butler who knows too much, sex in all its colours, a petty Prince—it's testing times for the British royals 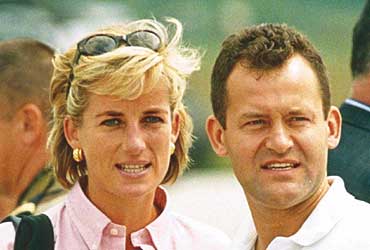 outlookindia.com
-0001-11-30T00:00:00+0553
If only this was another one of those royal affairs that light up and pass out under the flashbulbs. It's easy, even fun, to forgive British royalty its dysfunctional grandeur. A sex scandal, even if it is a male courtier raping another on a palace settee, is still standard royal fare. But the suggestion of sex between a servant and a royal now hovering over St James' Palace is potentially far more embarrassing than many before. And that Prince Charles should be selling off gifts to him through servants with 20 per cent commission and the rest for himself? This will ever be a nation of shopkeepers, but not even the British were expecting this.

Boring husband to Diana, unconvincing lover to the diesel-fired Camilla Parker-Bowles, a devoted fan of organic manure—this is the Prince of Wales the Brits have learned to accept. They are now looking at him, in just a few days, as something of a royal racketeer. Because the gifts he received and now reported to have sold are the property of the state. "Instead, they are effectively being sold off in a car boot sale in front of St James' Palace," complains Labour MP Stephen Pound.

Courtiers have prodded skeletons out of royal cupboards too fast to count over the last week. The trial against Paul Burrell, Princess Diana's butler, was dramatically halted hours before he was to take the witness stand on November 1. The trial had been going on for 10 days, the case for two years. The charge was that he had taken away 310 of Diana's possessions after her death without telling anyone. But now the Queen let on that the butler had only "kept" those things, not stolen them. The Queen had been briefed three times in the last year about the case. Why didn't she say so before?

Was there something that Burrell was going to reveal in court? "I had two years of thinking that I had been abandoned," he said once the case was dropped. "I was being fed to the lions." He said he knew a lot about Diana's lovers and "if I am required in any court to answer questions about them, I will do so".

The story about the lovers still came out through a leaked statement he made to the police. "On one particular evening, which was the Princess' birthday, she was wearing sapphire and diamond ear-rings and looked absolutely stunning," the butler told the police. "She went upstairs and took all of her clothes off and went out wearing a fur coat to meet Hasnat Khan. I think the Princess was seeing Dr Hasnat Khan for about two years." Over that period, Burrell smuggled Dr Khan to Kensington Palace on many nights in the boot of his car, and smuggled him out in the mornings. And often, he says, he smuggled Princess Diana out in the boot of the car to see him.

Burrell in his police statement also said that Diana used to see Gulu Lalvani, an Indian millionaire. "Gulu Lalvani was a millionaire and also another Muslim, which I think the Princess thought would make Hasnat more possessive. In fact, it had the opposite effect."

Lalvani is really a Sikh but Diana's mother Frances Shand Kydd also thought him a Muslim. In a story he sold to the Daily Mirror for £300,000, Burrell recalls a day when Diana's mother was shouting at her on the phone over her relationships with "Muslim men". Diana handed the phone to Burrell who said that Diana's mother's screaming was "a hate-filled personal attack on the type of men the Princess surrounded herself with and their religious beliefs". About the same time, the Queen's plain-speaking husband Prince Philip was writing Diana letters calling her a "trollop and a harlot". Burrell says Diana's mother shredded a collection of Diana's letters after her death "to erase a part of the Princess's life and change history".

The Guardian thought there could have been a point in Mohammed Al-Fayed's claims that Diana was targeted because of her closeness to his son Dodi, another of her Muslim beaus."The real boost to conspiracy theorists comes from Burrell's revelation about Diana's relations with Muslim men and the reaction of those around her," according to the newspaper. At their meeting soon after Diana's death, Burrell says the Queen warned him, "There are powers at work in this country about which we have no knowledge."

But was it just Diana's lovers that the Queen wanted to cloak? The next skeleton to tumble out of the regal closet was a claim by George Smith, an ex-footman at St James' Palace of Prince Charles, that he had been raped in 1989 by a courtier who is still there and who is very close to Prince Charles. He says he was given champagne, then gin and tonic, then beer, then more champagne and was raped while unconscious. He woke up to find himself on a palace settee with his trousers down. "I was totally ashamed," he says. "I felt sick."

His complaint was dismissed, and so was he with £38,000 and an agreement to keep his mouth shut. The incident surfaced again in the police inquiry into Burrell. New revelations claim that Prince Charles phoned police commissioner Sir John Stevens, and the inquiry against the X-rated incarnation of Jeeves was dropped in February this year. Prince Charles has spent more than £100,000 to defend his aide against the charges.

It was from this that the most lethal threat to the Palace emerged. Royalty would lose some of its mythical delicacy if Her Majesty were to ask the Prince of Wales who was buggering who in his palace. But the devastating testimony from Smith was recorded on what is now called the rape tape. Diana came to know of the complaint against the aide to Prince Charles, and Smith says she invited him to the palace, plied him with champagne, and taped his story about the rape. What was also taped was his statement that he had witnessed something between a member of the royal family and a servant. Smith said that if he were to reveal what he saw, the consequences for the monarchy would be devastating.

Burrell and Diana's sister Sarah McCorquodale both heard the account. Diana kept the tape in a mahogany box. Diana's sister came to pick up the box after her death but Burrell told her it had disappeared from the pantry. His solicitor now says Burrell "hasn't the foggiest" where it could be. The police had not found it when they searched Burrell's house in the course of the investigations. Royal pundits are convinced that the trial against Burrell was halted because of fears that prosecuting him might just induce someone to bring up that tape.

As these stories came to the fore, it also emerged that Burrell himself had a gay relationship with Australian Greg Pead and tried to make a homosexual advance towards gay TV presenter Michael Barrymore. It was becoming dizzying trying to keep track in London last week of who had been trying to do what to whom in the royal palaces.

But Burrell had developed a strong rivalry with Michael Fawcett, the "personal consultant" of Prince Charles. The media have had much to say about how close Fawcett is to Prince Charles; the two even dress similarly, some reports have pointed out, with pictures to support their claims. Fawcett is being mentioned as the chief go-between who helped sell many of the gifts that brought Prince Charles about £100,000 a year. The sales have raised questions not just about legalities but also whether the royals and their staff had declared the income and paid tax on it.

As protests rose, Prince Charles ordered an inquiry—to be conducted by none other than his own private secretary, Sir Michael Peat. There are questions for the Queen to answer, that will not be raised by Sir Michael, and would be awkward to raise in law. The Queen is legally above the law.The courts sit in the name of Her Majesty the Queen. The Queen can hardly be produced in a court that exists in her name; it would be the constitutional counterpart of bringing God to justice before God.

Royalty had been recovering from the after-effects of Lady D's death, with the golden jubilee celebrations of the Queen's coronation and the grand funeral for the Queen Mother. It now faces the question of which royal slept with which servant. And it faces the more difficult question about the selling of royal gifts—a matter to do with pettiness, but not a petty matter.