Diary Of A Mobile Entrepreneur

I had my epiphany one evening in 1991 in Guruvayur from where I was trying to call the US embassy for a fix on my green card renewal appointment... 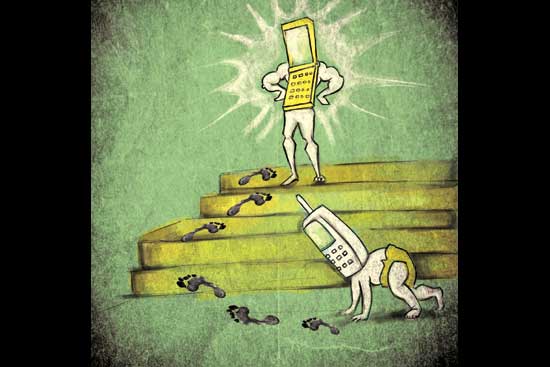 I had my epiphany one evening in 1991 in Guruvayur from where I was trying to call the US embassy for a fix on my green card renewal appointment. It was monsoon time in Kerala and I was standing in the reception of one of the lodges that litter temple towns, with one phone at the reception counter. I had placed a TRUNK call and, hearing my anxious tone, the operator suggested that I upgrade my request to an URGENT TRUNK call which would be more expensive but would take about a half-hour to connect. That definition of urgency—that is, of a half-hour wait—wasn’t working for me, so it turned out I needed to upgrade my request to a LIGHTNING TRUNK call. And so it was that at a cost of 10 times the normal trunk call, I could finally make my call hollering loudly on a poor connection.

That was how it was in 1991. I knew then that we would be successful in telecom and returned my green card and deci­ded India is where the action would be for me next. This was a new technology, new area, even if most people had written it off as being unviable and a toy for the rich. I remem­ber the reigning telecom czar of the day giving an interview in a newspaper saying that country didn’t need cellphones, it needed more pcos!

Building an industry and rolling out a network at the time was not exactly the fun trip entrepreneurship was supposed to be. Import duties were almost 100 per cent for equipment. No one knew what the laws were for digging the road to lay fibre. There was confusion about  muni­cipal bylaws for rooftop cell sites; each site required 50-plus approvals from different government bodies. There was no such thing as call centres. Handsets were big, bulky, expensive and would last about an hour before needing to be charged!

My earliest team had people from the army, retired telecom department engineers and a mix of youngsters from different and diverse backgrounds that had teamed up for this exciting new experiment. Everyone did everything in those early days. I went on sales calls and sat and took calls in the call centre. Young engineers slept on rooftops after gruelling sessions of bringing up a cell site.

But that experience of the first call on a mobile handset in August 1995 was like travelling to the moon: spiritual, satisfying, history-making. The rest should have been history as they say, but it took a long struggle of over a decade before it started looking like a real business.

Many customer images from those days are still imprinted in my memory to stay there forever. But one happy one was on a fishing trawler in the Arabian Sea with Mollywood star Mohanlal (sharing some rum and fish fry) and wat­ching the trawler skipper speaking on a bpl Mobile phone to someone on shore about details of the catch he was bringing back.

Nokia, Motorola, Siemens, Alcatel were the names on the phones. The coolest:  Motorola 7500 and Nokia 2110, both bulky pieces that today are true vintage phones. Today’s smartphone set would likely look at those implements as something out of the stone age. SMS was the cool, hip thing to do in an age where telegram and telex was still part of communication lexicon. Later it even shook conventional notions of romance and fidelity.

I remember the earliest customers calling on our ‘toll-free’ line. Needing help with basic functions such as starting up a phone to reading a bill to charging a battery. The challenge those days was to manage the ‘queue’ of calls. Remember that ‘you are in the queue, please hold’ message? The fun was when I got the ability to monitor the call centre as calls were answered and got the full range of customer interactions from those that would just call to simply chat up the girl to those who needed help with something unconnected with the mobile phone! In an age of Whatsapp and mobile internet and social media romance, calling a call centre in the middle of the night as a form of entertainment seems very, very weird indeed. But that was how it went at that time.

In the last 19 years, telecom technology has transformed and grown by leaps and bounds. While architecturally things remain intact, the technology today is unrecognisable from what we started with. Moving the phone from being a clunky device to make phone calls to one that lets you do everything. A network and service that only allowed calls and SMS to complete world-class networks that let you browse, talk, chat and work. Call centres that kept you in ‘queue’ to more automatic web- and IVR-based customer management systems. From a few lakh users to 800 million plus that depend on their mobile phones for work, information, news, romance etc. To quote a famous cigarette ad, ‘You have come a long way, baby!’