Javed Akhtar saheb struggling for words to say about Dilip Kumar saheb. Like a meaningful pause…as befits a man for whom only silence can be the best tribute. 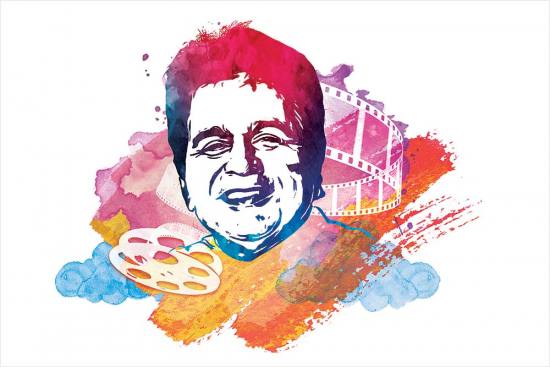 Some words are overused, often in an improper context. For instance, it is a cliché to refer to just about everybody as being an institution. But it is quite appropriate for Dilip Kumar Sahab. He was indeed an institution. In fact, he was much more than merely a great actor. There is method acting, which is employed by actors the world over to play their characters in a special way. Very few people know that Dilip Sahab was the first actor to start method acting in the world. I don’t know if he himself was aware of it when he started his career with Jwar-Bhata in 1944? It happens. Like every breath that we took before oxygen was ‘discovered’ and named so, was nothing but oxygen only. Sometimes people develop something distinct on their own and start working on it. It is only later that they come to know what that process is called. Marlon Brando is generally considered to be the first method actor but he was seven to eight years junior to Dilip Sahab in his career.

What was happening in the Indian film industry at the time was not known to the outside world. Indian films were rarely shown abroad back then. There are many things, which originate in India but people from outside the country do not have any idea about it. For example, a few years ago, the US found out that neem contains antiseptic properties. But as I still remember, when I had rashes on my body as a child, my grandmother used to boil neem leaves and apply them. We have had many such traditions. One such tradition was started by Dilip Sahab in acting, which later came to be known as method acting. I do not know if Hindi cinema at large was aware of Stanislavski’s school of method acting in his time, but the style of acting that Dilip Kumar developed in 1944 still reflects in actors in 2021. It is an altogether different matter that these actors do not know where it came from because Dilip Kumar’s acting style has been passed on from generation to generation. It is like the wheels in our vehicles. All of us use them but we don’t know who invented them? Such has been the influence of Dilip Sahab on Indian actors. I cannot say the same about any other actor who inspired so many generations of actors.