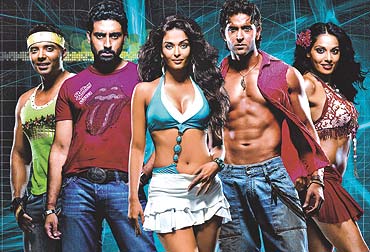 Healthy diet is a must. But sometimes you can’t help craving for junk food. Dhoom 2 is like masala street grub, tangy and savoury. Of course, it does absolutely nothing to your intellect and soul but is finger-licking fun. It would be easy to call it all style, no substance. But a cops-and-robbers heist film doesn’t urgently require a story. My worry was certainly not about the content but whether it would be entertaining enough. I enjoyed it, specially the smashing first half with master thief Aryan, aka Mr A (a supercool Hrithik), changing clever disguises and running away with the loot, be it in a lone train in the Namibian desert or a Mumbai museum. In between, he also dances swimmingly to Vaibhavi Merchant’s (the Kajra Re creator) energetic choreography.

Mr A’s love story with another thief, Sunehri (Ash), does slacken the pace badly in the second half, but Dhoom 2 ultimately is a crazy mix of music videos, video games, Jewel Thief-kind of Bollywood films and Bond. It’s a spectacle: the cinematography, stunts, locales—from Namibia to Fiji via Mumbai and Rio—are eye-popping. Call it derived but it does dare to dwarf Hollywood and try to defeat the Big Brother at its own game. With song ’n dance and emotions thrown in for good measure. It’s smart and clever new Bollywood.

It is also cinema of the stars, of larger-than-life glamour. Ash and Bipasha display bronzed, toned bods in hanky-small dresses. Dhoom 2 teases, titillates, caters to the voyeur in every viewer. But there’s no gender divide here. We women too have been given an equal opportunity to ogle at dishy Hrithik. The big moment is when Ash’s light eyes meet Hrithik’s light eyes. I suspected those almost identical pair of eyes would make the two seem like siblings. But there must be something about Hrithik. How the Ice Maiden thaws! It left me feeling sorry for Abhishek. His laidback cool anyhow just withers away in front of Hrithik’s blinding presence. Much the same happens to Bipasha. She sizzles in a bikini and then slinks into a role which can’t be defined as anything more than a cameo. The moment of unintentional irony: a newly pencil-thin Ash feasting on a many-layered burger!