Can you hear the dull throbbing of vimanas in the sky? Can you smell the burning embers of the morning fires? Can you feel the thud-thud of millions of boots on the ground? Assassins, demons, monsters come together on the battlefield  with super-warriors to play out the final battle. There are atomic weapons, lasers, gene­tically engineered super-elephants. The archetypal und­er­­pinning is the story of heroes overcoming hardships and growing in the process.

It’s the Mahabharata, but, as compelling as it is removed from the Maha­bharatas of the Indian imagination, Scottish comic book writer and occultist Grant Morrison’s version takes the myt­h­ical battle of Kuruk­shetra into the hyper­­real realm of science fiction. “A genre mash of superhero action and myt­­h­­ology grounded in the all-too-human passions of its warriors, villains and monsters” is how Morrison, who’s also working on a TV series to recreate the “greatest human story ever told”, puts it.

The TV series, in turn, builds on 18 Days, a graphic epic fantasy, also illustrated by Morrison, that kicked off on YouTube in August. Of his creation, Sharad Deva­­­rajan, executive producer with Graphic India, and the man behind 18 Days, says, “Think Lord of the Rings meets Avatar and then multiply that by ten!” The Mahabharata, it seems, is everywhere, in newer versions, newer imaginings, newer retellings, in India and in the west. A gold vein has been hit, and so many writers seem to want to reinvent the cosmic grandeur of the Mahabharata. What the story-tellers—or retellers—relate well to is the contemporariness of the mother lode of classics and its web of nuanced human characters, unlike the snarling, irredeemable evil galaxy of the west. Suddenly, there’s a big splash of TV serials, animation films, graphic novels, TV debates, blogs, apps, posters, T-shirts selling the zeitgeist of the ancient text.

Sandipan Deb, author of The Last War, which sets the epic in the Mumbai under­world, says it’s “the sexiest story to market if you’ve devised the right strategy”. In his thriller, Deb turns the game of dice from the epic into cricket match-fixing that Yudhishthir ends up losing. “You pick up portions you like and interpret them your way. In publishing, everyone seems to be going through the clutter to get people to read your stuff,” he says. 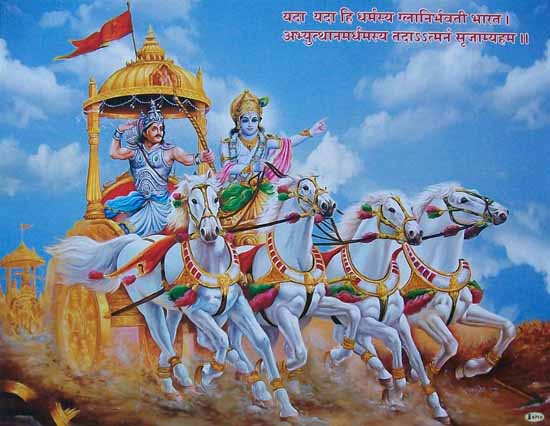 There are writers who feed on the popular fantasy of the ‘superiority’ of ancient Indian war machinery.

In the twists and turns of the endlessly malleable epic, eight times the combined length of the Iliad and the Odyssey, fantasy and conspiracy theories make you want to go back and dig up obscure references, illuminate the dark corridors and read afresh. It still delivers the same punch as B.R Chopra’s 94-episodes series on DD National did 25 years ago. Roopa Ganguly, who played Draupadi, says the best way to modernise an ancient text is to think with a modern mind, without contradicting the image in people’s minds. The new drama ser­ies on Star Plus casts the throne of Hastinapura in a new mould, etching out provocative characters caught in the mesh of kinship and conflict. Up next is a `50-crore animation film in 3-D format that will be out this December, in which Arjun, Draupadi and Bhishma will speak in the voices of Ajay Devgan, Vidya Balan and Amitabh Bachchan and even strut around like them. Director Amaan Khan says the biggest challenge was to capture the likeness of the celebrities in 3-D without advanced motion-capture technology.

Books on the Mahabharata never rea­lly stopped but some new ones are intri­guing. V. Raghunathan’s Locks, Maha­bharata and Mathematics explores how seemingly unexpected worlds can have expected parallels. And, one might add, how minds can make curious connections: Raghunathan, an avid collector of locks, was apparently pondering how Draupadi came to possess five husbands when he chanced upon a lock that required five keys. He immediately connected it to a commonly known fact—equations of the fifth degree have five solutions, the way quadratic equations (of the second degree) have two, as every Std X student knows. “My book shows how unexpected worlds can collide erratically,” he says.

And there are some writers who feed on the often prevalent idea that weapons described in Indian epics might have parallels with the advanced weaponry of our times. Christopher Doyle, author of The Mahabharata Secret, which weaves together history, mythology, science and technology with the epics and scriptures, asks, “What if the epic actually deployed science and technology which never made it to our recorded history and got lost to the ravages of time or was deliberately obliterated?” 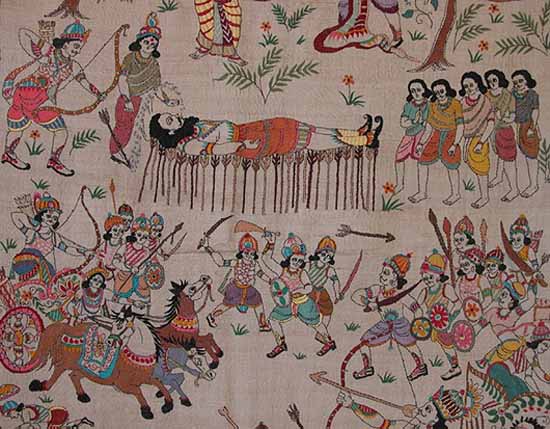 Management gurus have for long been tapping the epics for lessons in business and corporate governance.

There’s even a bowdlerising brigade, presenting simplified versions for children. Prabhu Parthasarathy, California-based engineer, has attempted in Mahabharata for Kids a version bereft of blood, gore and conflict. “If Arjuna shares his wife with his brothers, my five-year-old son should think it’s bec­ause he’s won a prize and must share it with his family. The reinterpretation must be meaningful to a child,” says Parthasarathy, whose four-month-old book has the makings of a hit.

Management gurus, of course, have for some time been digging out business strategies from the epics. Prof Sanjoy Mukherjee, who teaches at IIM Shillong, says, “Structure or mathematics is important, but you have to combine it with inputs from literature that’s more connected to real life. In exploring the deeper connotations of values and ethics, the Mahabharata stands out.” In his self-development classes at IIM Bangalore, Ramnath Narayanswamy delves into the question of dharma in business management. He says Kuru­kshetra is not just a physical battlefield, but a “karma kshetra”, where actions have to be performed, and that the epic teaches us to employ the three armours of shraddha (devotion), viveka (discernment) and vairagya (detachment) in this battle. “In the greed for corporate profits, budding managers must never lose sight of the inner battle,” he says.

Sifting through the sands of time, some authors have probed deeper for alternative perspectives. Anand Neelakantan’s Ajaya: Epic of the Kaurava Clan, Roll of the Dice, which will be launched in December, seeks to project the Kauravas as the champions in a multi-hero narrative. According to the author, in real life, people have shades of grey, which the Mahabharata explores allegorically. “The inspiration for my book came from the Malanada temple in Kerala, where Duryodhana is adored as the principal deity, tribals are priests and the land tax, even today, is collected in his name.” Neelankantan presents a different take on a character who mostly gets perceived negatively. 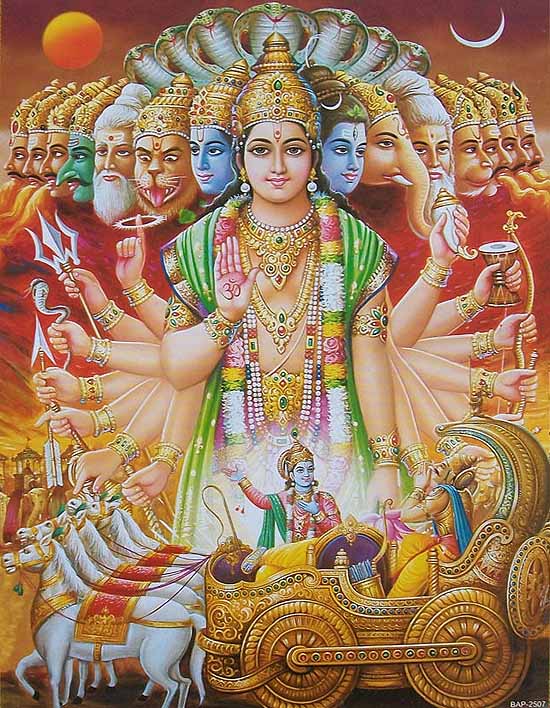 Among the many versions of the Mahabharata available, one that stands out is written from the PoV of Karna’s wife.

In Karna’s Wife: The Outcast’s Queen, Kavita Kane doesn’t simply contemporise the epic. She replays the text through the eyes of Uruvi, an accomplished Kshatriya princess who falls in love with and dares to choose the Sutaputra over Arjuna and must come to terms with the social implications of her marriage. It’s about Karna’s queen who loved, lost and yet won. “Seeing Karna through his wife’s eyes was more interesting and so yielded a feminist narrative. It’s a woman peering into a man’s world, a warrior’s wife questioning war and a woman fighting to save her family,” says Kane.

Uru Bhangam, a play by Manish Mitra, which premiered in Calcutta this April, draws inspiration from Peter Brook, whose colossal French adaptation of the Mahabharata made it accessible across the world. In a spectacular war episode of Uru Bhangam, hundreds of arrows are hurled through the air in choreographed motion; flags fly down from the mountain tops; armies are poised on high rocks, their primitive weapons ready. Warriors are choked, knifed, strangled, disembowelled and decapitated. Finally, in a coup de theatre, a divine weapon blows off half the mountain. The end of the world is bef­ore us. The horrors of the war merge with the complexities of modern-day life. The seven-hour spectacle has alr­eady been staged in Shimla, Jaipur and Siliguri and will do Europe next.

There’s also a flourish of new blogs, apps, posters, T-shirts and garments, all based on the epic. The Mahabharat Katha application on Google Play covers all nine parts of the epic in Hindi font, while Shamlu Dudeja’s kantha stitch work on wall hangings and saris presents vignettes from the glorious tale. The richness of the text and its open-endedness leaves space for a billion retellings.

Mihir Wanchoo, a Minnesota-based blogger, confesses he’s a Mahabha­ratophile. “The saga is so cool that you can have endless debates. Ask any desi mythology lover who the best archer is and you’ll get many answers. And the ultimate ire-raiser: who’s the better warrior—Karna or Arjuna?” Bookworm and blogger Vishwadha Chander, however, feels it’s healthy that mythology is being made friendly, but it shouldn’t diminish the versions many of us nurse from childhood in the mind’s eye.

Prem Panicker, managing editor of Yahoo! India, reflects on the cross-generational appeal of the epic. “You can teach narrative journalism, war reporting or even sports tactics with it. The living epic has the same masala as any Ekta Kapoor serial or Rohit Shetty film. While Ramayana is frozen in time, the Mahabharata is a throbbing bomb,” he says, perhaps a trifle partial, for the Ramayana, too, has its ardent following. For now, however, the Mahabharata, is the flavour of the season.

A Long Benefit Of Clergy