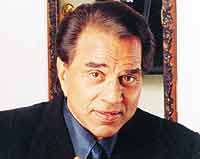 So, what advice did you give him?
That the mehmaan nawaazi should be as good as the food, if not better, and that he should ensure that families come here.

You're known to be a foodie.
I used to be fond of food and drink. But now I'm very particular. I don't drink or eat much.

You're returning to Bollywood?
Yes, after five years, I'm acting in a few new films with my sons Bobby and Sunny. It's a new innings for me. So I eat and drink less now.

Do you play your son's father?
Yes, in one of them, I'm Bobby's athlete father. In the other, I'm Sunny's father.

So, you're an MP, you're resuming your film career and now a restaurateur.
It's not difficult to balance the roles. I've always worked hard. I used to do manual work in the fields. Then, 2/3 shifts in the movies. So it's okay.

Your term as a Lok Sabha MP has been dogged by criticism. Does it hurt?
I'm like a child. So it hurts when people say things. People don't see the many things that happen, they see the one thing that doesn't.

How did you get into politics?
Someone said to me, we call India our motherland but we don't do anything for it. We need good people in politics. So, I couldn't say no.

You're reinventing yourself at 70.
Himmat ho to kuch bhi kar sakte hain.

What's next on your to-do list?
I'm trying to write a movie script.