Nothing more than a series of gags most of which leave you giggling silly. Its insane, illogical sense of humour can be so utterly rib-tickling that you are forced to overlook everything else 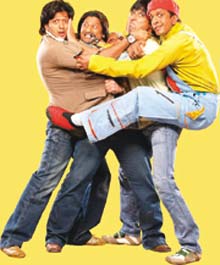 My favourite fun moment in Dhamaal is a dying man kicking the bucket—literally! Now don’t ask where that bucket came from; it’s this kind of insane, illogical sense of humour that permeates the film and can be so utterly rib-tickling that you are forced to overlook everything else. Forget the tacky technical qualities, forget the consciously low-brow feel, forget the lack of plot; forget the ‘inspiration’ from countless films including It’s a Mad Mad Mad World, Half Ticket and Bombay to Goa, the all-male Dhamaal is wonderfully balmy. The trio of writers—Paritosh Painter, Balwinder Suri and Bunty Rathore—come up with zany situations, loony characters (with every actor doing justice to the stupidity required of him specially Jaafri the idiot, Pahwa the drunk pilot with relative problems and Raaz the slo-mo air traffic controller) and some razor sharp lines. The film is essentially nothing more than a series of gags most of which leave you giggling silly. In fact, the gags are a bit too many, making the climax over-stretched. Perhaps the filmmaker should have saved some for another film.