Dew Upon The Grass

Apu's vision of the world hasn't aged, the same sense of wonderment prevails 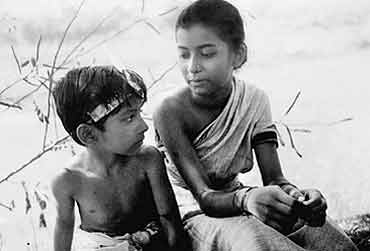 outlookindia.com
-0001-11-30T00:00:00+0553
I saw Pather Panchali early in 1956, very soon after it was completed. Indeed, I was one of the first people in Europe to see the film. I don’t think any of us had seen a Bengali film before; but what we saw left us utterly astonished. We knew instantly we were in the presence of a work that was absolutely extraordinary. Interestingly, we were already acquainted with Ray.

A year or so before, he had written an article for the British Film Institute magazine Sight and Sound, about meeting Jean Renoir and watching him work on his classic film The River, in and around Calcutta. He was, of course, a film enthusiast from his early days, and read everything he could about cinema. His article had made a great impression on us because he was—apart from being a gifted graphic artist and musician—a fine writer.

There was no way that we could ignore the quality of Pather Panchali. It was and remains one of the truly great films, of powerful poetic quality, the work of an artist of exceptional creative personality.

Most remarkable was that this personality was wholly expressed and demonstrated in a first film—one made under intense difficulties, over a long period. Ray and his unit worked in their free time and stopped for months at a time when they ran out of money. And, of course, during these pauses, the seasons and the landscapes changed, adding immensely to the difficulties. Most of the people on the film, including Ray and cameraman Subrata Mitra, had no previous experience of working on feature films. Given the conditions under which the film was made, it is something like a miracle it was finished at all, never mind that it was a masterpiece.

There is some very special quality in a great filmmaker—a man who can impose his own artistic personality upon everything he touches. So many elements go into a film that it takes a very special gift to impose his own distinct mark. But that is what this young man had done with Pather.... Almost half a century later, our perception of the film is unchanged. People who encounter it for the first time still see it and recognise it for the great film that it is. Like any major work of art, it does not age.

The daily existence of this little Indian village is certainly very unfamiliar to most people in Europe, and I would guess in Calcutta too. But the magic of Ray’s vision is that we altogether forget the unfamiliarity, because the film is above all about people, into whose personalities and hearts it enters directly. The important thing is not that they are villagers, not that they are Bengali, but that they are people. And that is the universality of the film. It’s so marvellous to go back to the film after all this time, and to discover yourself once again in the presence of old friends, still there where you first met them.

Watching the film just now, I wondered if the reality of that way of life has changed. I’m sure it has. I’m sure that even in these remote parts technology must have invaded. Maybe that way of life doesn’t exist just like that anymore. But it doesn’t change anything, because it still exists in Ray’s film; and these are still real, living human beings. 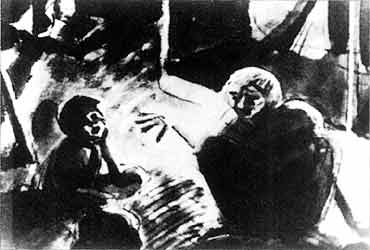 A Ray sketch for 'Pather Panchali'

Seeing Pather... again, you are still overwhelmed by its truth and poetry. There are scenes you have forgotten and are thrilled to rediscover, and there are scenes you never forget, and for which you are eagerly waiting. For example, I was waiting with real excitement for the moment when you first see Apu’s eyes through the hole in the blanket. The moment came, and it was as wonderful as ever. And all those little private glimpses of the characters, which make them so complete and alive—the aged aunt, the pompous schoolmaster, the gentle father and the mean neighbour. You see them again, and remember them with joy, and share little Apu’s vision of the world.

Like every giant, Ray suffered attacks from intellectual midgets, some of whom whined that the only reason he was so well received in the West was because of the negative picture his film showed of poverty in India. This is, of course, rubbish. Certainly the people in his film were poor and their lives were conditioned by that poverty. But poverty, in one degree or another, is a fact of life for a very large part of the world’s population. The people in Pather... are engaged in the struggle to survive; but it does not impair their humanity. The idea—and it is certainly not confined to India—that it is somehow unpatriotic to portray your country in anything but a totally favourable and sunny light is pernicious and dangerous. It is a recipe not only for bad films, but also for rotten societies.

I hope Pather Panchali’s 50th anniversary will be celebrated with a relaunch of the film in good prints and good theatres; and the film properly reintroduced to the press and the public that has grown up in the years since it first appeared. When people are introduced to the film, or reminded of it, I have no doubt that they will be as excited by the discovery as those of us who had the unforgettable privilege of being the first to see it, all those years ago.

(The author is a veteran critic and film historian)

In His Wake, The Awakened