Devil In The Dustbowl

We let the pitch get to us, but hey—I complained even when we were on top 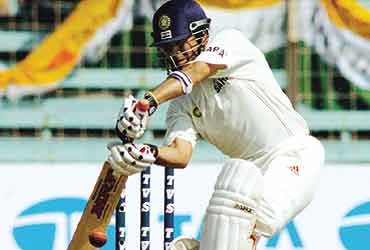 outlookindia.com
-0001-11-30T00:00:00+0553
There have been many angry reactions over the pitch in Mumbai, but there are an equal number of voices claiming that our team has been whining unnecessarily because we lost the final Test. To set the record straight, I complained about the pitch on the morning of the third day itself. We were very much in the box seat at that time, with a 99-run lead and our pace bowlers in deadly touch. I spoke to match referee Ranjan Madugalle about the wicket, letting him know my view that it was unsuitable for Test cricket. We went on to lose the Test, which is why we are being called whingers, but it's the pitch we are unhappy about, not the fact that India managed to pull one back.

I went to the match referee because I felt that such a pitch would sour the spirit in which both sides competed for the Border-Gavaskar Trophy. We have been involved in some intense contests in the past four years, with more than one game being decided in the last session of the fifth day. That is the kind of cricket the world expects when India and Australia play each other in a Test series.

It was not only the Australians who struggled on this pitch. A part-timer like Michael Clarke was made to look like a spin wizard by the Indians who play spin very well. Even the hosts would agree that it was the pitch that made the youngster end up with six wickets—his maiden five-wicket haul in first-class cricket.

At the end of the Nagpur Test, Rahul Dravid made an interesting comment. He said that pitches like the one in Nagpur should be made for domestic cricket so that the Indians have a taste of fast tracks before they make it to the highest level. Dravid is a respected figure in Indian cricket, and I hope his suggestion is taken up seriously because Indian cricketers will improve if they learn to play on seaming tracks from the start of their careers. Devilish dustbowls don't do anything for the team in the long run.

As far as the result of the game goes, I thought we would knock off the 100-odd runs needed even on this pitch. The fact is that we did bat badly and to some extent let the demons in the pitch get to us. The Nagpur pitch defeated the Indians before they played a ball, and the Mumbai pitch had a similar effect on us during that disastrous post-tea session. Since it was a pitch on which you are never in, our batsman went for their shots, which proved to be the wrong decision in the end. However, it was not our batsmen who lost the game, but the Sachin Tendulkar-V.V.S. Laxman combination that won it for India.

You needed some luck to survive for even one session on this pitch, and Sachin and V.V.S. had a fair share of good fortune with nicks not carrying. However, between those difficult moments, they showed the world just why they are rated so highly. When we analysed the game later, we realised there was a five-over phase in the morning where the two of them scored 58 runs. That little run of play is what eventually separated the two teams. 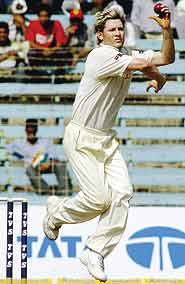 Fortunately for us, the series was decided before this game, since we had won the tvs Series in Nagpur itself.

While there is disappointment about the way the tour ended, there is plenty to cheer about when one looks at all four Tests. The hero for us was Damien Martyn who was absolutely wonderful in every game. There have always been doubts about his ability on slow, low, turning tracks, but his performances in Sri Lanka and India have proved how hard he has worked on this aspect of the game.

Then there is the emergence of Michael Clarke as one of the most exciting young cricketers in the world today. This gives us plenty of options as we go into a long domestic season with New Zealand and Pakistan.

Other than these standout individual performances, every member of the team contributed whenever the time came. Simon Katich was coming in at number three for the first time in his career, and he did a great job in that position. Shane Warne, who has never really relished bowling in India, did a great support job, and took the crucial wicket of V.V.S. quite a few times. I wonder what he would have done on that Wankhede wicket. Warney extracts turn and bounce from any wicket. Who knows, the result could have looked a little different had he been there.

However, in my opinion, the biggest performance came from the pace trio of Glenn McGrath, Jason Gillespie and Michael Kasprowicz. We were pretty undecided about our bowling combination at the start of the tour but when both McGrath and Brett Lee bowled well in our tour opener, it made our task even more difficult. We opted for the senior pro, and he delivered by giving us an early breakthrough in virtually every innings. Glenn's return to peak form is one of the really big gains we have made in this series. He has always been our strike bowler, but there were some questions being asked once he returned from injury. The champion that he is, Glenn answered his critics by doing what he does best—bowling with unreal accuracy.

The fact that our pace attack stayed fit right through the series speaks volumes for their commitment and the hard work put in by our support staff. The home team has a much younger pace attack but could not withstand the punishing conditions in Chennai and Nagpur. Our 'old warhorses' went through the tour thanks to Errol 'Hollywood' Alcott who made sure they were as good as new on the eve of every game.

We knew that winning in India meant that we would have to defeat the hosts as well the local conditions. We tried yoga and had a yoga instructor accompanying us right through the tour. She helped us in our warm-ups and cool-downs and with the assistance of a masseur ensured that all of us were able to beat the heat. Our support staff rarely gets any accolades. However, Errol is the best physio in the game by a distance and has been a major contributor to the Australian team in the last two decades.

A special word for Adam Gilchrist, who stepped in during my absence and led the team like a champ. I thought he deserved to lift this Border-Gavaskar Trophy, which is why I called him to accept it along with me. India is a difficult tour to make because of the quality of opposition as well as the off-field demands and commitments. Gilly was on the ball right through and managed to do what no captain has done in 35 years.