Each decade of Indian cinema has thrown up its own notion of beauty—from the likeness of a goddess, the shift is towards blonde streaks and gym-toned bodies 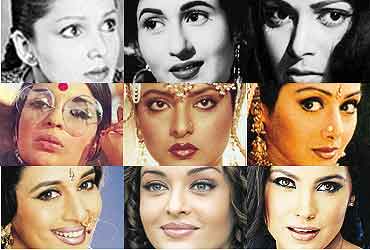 1930s
Devika Rani : Calendar Art, Ethereal, and not quite there. It was a wispy, faraway look captured somewhere in transit between woman and goddess.

1950s
Waheeda Rehman : In Black ‘n’ White, The play of light on her statuesque face lent a touch of mystery, an other-worldly glow.

1980s
Rekha : Special Effects, Our first dusky woman. The ‘ugh-ly dumpling’ willed herself into a special kind of beauty.

1990s
Madhuri Dixit : Classic Touch, The last of the great faces, a nod to tradition but also a prefigure of the coming tryst with the plastic Barbie body.

2000
Lara Dutta : Looking Alike, Engineered perfection from tip to toe. "First you had desi wheat. When we began to import the hybrid kind, our wheat lost its mithaas, sweetness. Our young actresses today are like hybrid wheat, unlike earlier actresses who were the desi variety." Pat comes the answer when I ask Dharmendra, one of India's original hunk-actors, what he thinks about the new breed of actresses. This was some years ago. Today, that sweetness has given way to namkeen (that is, on the saltier, saucier side of beauty). Subtext: they don't make them like his and the nation's dream girl—the doe-eyed Hema Malini—any more. Nor do they make Meena Kumari whose pain-laden, heavily-kohled eyes spoke volumes as the camera zoomed in on them and her voice struck tremulous notes.

In the new millennium, close-ups increasingly throw up other parts of the anatomy. The geography of beauty in Indian cinema has changed as have the notions of it. Once upon a time, beauty was centred on the face—usually a deified one. Rewind to the beginnings of cinema when Devika Rani was a major star at Bombay Talkies and you find that actresses were like apsaras—captured somewhere in transit between woman and goddess. Mythic and mysterious, a large number of them could easily have materialised out of Raja Ravi Varma's paintings of goddesses and queens—fair 'n lovely and well-rounded women with their sexuality but barely suggested. Actresses, like goddesses, were objects of the gaze: often desired but rarely seen as desiring, in a sexual sense that is.

Traditionally, the type of female beauty in Indian films was derived from two sources, according to director Shyam Benegal. "In the silent films you had the Laila Majnu-Shirin Farhad kind, with their look and costumes taken from Turko-Iranian myths and miniature tones.And, you had the mythologicals from Raja Ravi Varma's work with his idealised idea of women...." And fairness here is an ingrained marker of beauty that was, as Benegal says, reinforced by the Anglo-Saxon type. This ideal continued with a few digressions and some metamorphosing through the '50s and into the early '60s. It was the calendar art idea of beauty popularised on biscuit tins that was incarnated on the screen.Devika Rani, the blue-eyed Vanamala and Durga Khote—or even the Jewish actress Sulochana (Ruby Myers)—had perfectly arched eyebrows, flower-bud mouths and ethereal not-quite-there expressions.

Actresses of that time were archetypes—divine beauty and perfect features, but few individual quirks. Even those who came in later like Leela Naidu, Bina Rai, Nalini Jaywant and Nutan were firmly placed on pedestals. Madhubala with her incandescent beauty did not seem of this earth, though her crooked smile and mischievous eyes prevented her perfect beauty from becoming static and boring. Nargis, with the trademark gap in her teeth and her often wild, short hair—she even wore pants—was an exception: her strong personality cracked the surface of a placid exterior.

There was, of course, the magic of black and white cinema. Heroines acquired fuzzy halos, courtesy backlighting. Often, hairdressers peroxided bits of their hair so that when the light fell on it from the rear, they were invested with an otherworldly glow. The play with light and shadow also lent an air of mystery. Waheeda Rahman appears more divine in the black and white films Guru Dutt made, as does Nargis in the early films of Raj Kapoor—her face seemingly bathed in moonlight in the Dam Bhar Jo song in Awara.

The '60s ushered in belles from the South: Padmini and Vyjanthimala with their huge round eyes, chubby cheeks, long tresses and voluptuous figures were living examples of the classic principles of Indian beauty. However, the two actresses were as fair as their northern sisters—as were Hema Malini and Sridevi who were to follow in their wake.Rekha was among the first of our dusky heroines.An actress who willed herself into great beauty and allure, she also (initially, that is) looked like a Yakshi sculpture come alive. The wide-bottomed Asha Parekh with her fluttering eyelashes and heavily made-up eyes was not that different from the southern belles. These were women you could take home to mama: sensual yes, but still seemingly sweet and non-threatening.

Mama would certainly have liked Madhuri Dixit—"the last of the great faces" and the last link with the traditional, according to photographer Gautam Rajadhyaksha. The actress with the million-watt smile amalgamated both old-world beauty and the more globalised look of the day. Though both Saira Banu and Sadhana in the '60s were already moving towards a more international look.

The turning point came in the '70s with Zeenat Aman—and to a lesser extent Parveen Babi. Aman is the prototype of all the beauty queens and models now flooding Bollywood—from Aishwarya Rai and Sushmita Sen to Priyanka Chopra, Bipasha Basu and other long-legged beauties. Actor-producer Shashi Kapoor, who has serenaded heroines down many decades, believes that Sholay was the catalyst: "With all that mar-dhar (fighting sequences), the role for women was reduced. They had to exaggerate a lot to be noticed. So you had more prominent hairstyles and more make-up. Nor could most of the girls act." In other words, as moving props, the attention shifted from their faces to their bodies. But the '70s also, interestingly enough, saw the appearance of dusky actresses like Smita Patil and Shabana Azmi.

The old notions of beauty went for a toss in the mid-'90s when India found a prominent place on the global beauty map. The globalised look had arrived: be Indian but look international.Blonde streaks, blue or green contact lenses, pert noses, perfect teeth and gym-toned bodies began to dominate the screen. Silicone-enhanced bosoms perched on anorexic bodies seem to be the order of the day. The sari is increasingly becoming a costume, brought out for weddings and the like.Dr Sunil Bulabhai, a Mumbai-based cosmetic dentist who has redesigned the smiles of many film stars, maintains that the current crop of actresses covet a more international look because they are looking beyond Bollywood: everybody's looking for a crossover film. And, the Hollywood look is in demand. "Nature is asymmetrical, symmetry is man-made," he says wryly.

Yet, intriguingly, amidst all this engineered perfection—often from tip to toe—beauties of the less conventional kind have also found their place in the sun. "Beauty, the pure beauty of the kind Hema Malini or Aishwarya have is not a prerequisite any more," says Rajadhyaksha, adding: "Kajol and Preity Zinta are wonderful actresses without traditional beauty or glamour. They made it on their acting. Each actress has a character and a personality of her own; roles are written for them." There's room for everybody from an Aishwarya Rai to the oomphy Mallika Sherawat. We have come a long way from Devika Rani. The French philosopher Roland Barthes wrote: "The face of Garbo was an idea; the face of Audrey Hepburn was an event." Today, the face of Bipasha Basu is just a passing idea. The body is the event.