He lives for the adulation of his fans and sure enough, his popularity has spread way beyond our shores 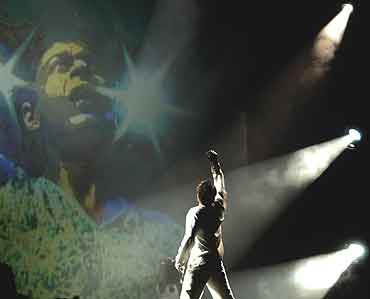 outlookindia.com
-0001-11-30T00:00:00+0553
Bleary-eyed, we landed in the US on September 2, 2004, a day before Shah Rukh Khan was scheduled to join us in Atlanta, Georgia—the city of the great Martin Luther King and now, also famous as the base of Ted Turner's CNN. Our mission: To make a sequel to my documentary, The Inner World of Shah Rukh Khan, produced for Channel 4, UK. It would be called The Outer World of Shah Rukh Khan. The main idea was to follow SRK on his Temptations 2004 show as it toured 12 American cities, ending in Toronto, Canada. Our filming began at the nec in Birmingham and the Wembley Arena in London a few days before. The British Asian audiences known to be loyal followers of Hindi cinema predictably came in the thousands. In the words of the show organiser, both British venues were indeed "over-packed". As we travelled to Atlanta, Georgia our first US stop, we wondered how SRK would be received. Though a huge number of people of South Asian origins have settled in the US, they are scattered across many different cities, unlike in Britain where these communities live in more concentrated areas.

While on the flight, my cameraman Peter Chappell and I discussed how we'd go about making this new documentary different from the first, how to convey what SRK means to his US fans, how to get a sense of what it means to be a star, and above all, make sure that we didn't end up getting overly distracted by the show itself. This wasn't going to be a documentary centred around a show, but about a thoughtful man caught in the eye of an adoring storm. While we were talking, I happened to look up at the in-flight screen only to see SRK smiling down at us in Aditya Chopra's Dilwale Dulhaniya Le Jayenge. Amazing coincidence. To think we'd be watching the film that proved to be the watershed in SRK's career. The film whose carefree, romantic, and playful hero, personified by an impish-looking SRK, would end up defining for his generation (and it seems the next generation too) the modern Indian hero. We took the fact of DDLJ being our in-flight entertainment as a good sign, thinking the world was indeed a small place (this cliche being especially true in a Boeing 747).

The next day, we went to the Atlanta airport to meet SRK's flight from London. Having made many documentaries on Indian movie stars, we knew there is something quite tangible about the way celebs can alter the spaces they enter and so within a few minutes of SRK's arrival at this otherwise mundane baggage-hall, the atmosphere had subtly changed. There was an air of excitement and an infectious buzz had spread as one by one, slowly but surely, his fans spotted him. Some waved coolly, giving off an air that they were SRK's old buddies and absolutely untouched by seeing him live (although their eyes were rarely diverted), others sprinted about with big smiles and poised hands ready to leap forward with their cameras and requests for autographs. Even the ones who had no ready cameras were grateful for their camera cell phones, which have turned most ordinary citizens into opportunist paparazzi, and will, no doubt, help to "deglamorise" movie stars in the long term. The photos clicked by eager fans are usually images of disgruntled stars who roll out of planes exhausted and visibly detesting the prospect of this impromptu photo shoot.

We were soon to discover the apparition of beaming faces and outstretched hands seeking autographs would be repeated at every city airport, hotel lobby or any public space through which SRK passed. But SRK remained seemingly unstressed by huge crowds, always smiling back at a fan, or shaking a frenzied hand and saying quickly, "How are you?" as he was swiftly whisked away by his personal security to a waiting limo. On a day when the fans seemed unrelenting, we asked him whether he found their keenness overbearing.SRK replied with a half smile: "The only time I find people invasive is when I'm eating. When I'm eating, I just don't like people looking at me."

The first show at the Gwinnett Arena in Atlanta, packed to its 8,000 capacity, set the tone for what we'd witness at every Temptations 2004 venue. Some venues only seated 4,000 and others over 22,000, but they were all invariably "over-packed". The exhilarated crowds cheered and applauded their favourite stars whether Saif Ali Khan, Arjun Rampal, Preity Zinta or Rani Mukherji. But as the title song from Kal Ho Na Ho played with an opening prelude of the sound of a pounding and insistent heartbeat, the audience knew it signalled SRK's imminent entry. The atmosphere turned electric, the intensity and volume of the crowd's roar shot up a few notches only to become noticeably deafening.

Just before SRK headed off on stage, he told us why he thinks people come to see him: "The key is not me, and the key is not what I do. The key is that I make people happy. I'm just the means to that happiness." Whether he is the means or the cause of that happiness is open to question but when SRK invited Bhavesh, a member of the audience to join him on stage as part of the show's routine, this man, no crazed teenager, but someone in his thirties, nearly passed out with emotion. To the keyed-up crowd, who would kill to be on that stage with SRK, Bhavesh recounted breathlessly: "Last week, I had a dream that I'd be dancing in Atlanta with Shah Rukh Khan and goddammit, it's happened!" Bhavesh then added: "And I have a holy father, so I must do this. Don't get insulted, Shah Rukh," and then Bhavesh proceeded to touch SRK's feet as a sign of respect. SRK was deeply embarrassed and moved by Bhavesh's gesture.

Bhavesh's wild enthusiasm was just the beginning. At each of the 12 shows, all we saw around us were thousands and thousands of adoring people with glazed eyes and broad smiles at the prospect of sighting King Khan. They saw nothing else. And whenever SRK appeared in his gleaming white suit, there was virtual hysteria. Among the many thousand Indian, Pakistani or Bangladeshi faces, there were also small clusters of Americans, who have succumbed to SRK's films and his charm. A 50-year-old woman who drove nine hours with her friends to San Francisco to watch the show, said excitedly, "I wouldn't drive nine hours for any Hollywood star. I saw Pardes and went back to the video store and asked, 'Do you have any more of this guy?' Then I saw Dil Se five times without subtitles." 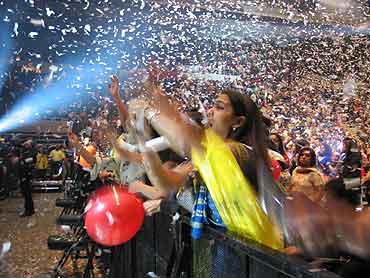 The way SRK's NRI fans react to him has a different intensity compared to those on a Mumbai street. Influenced by the culture of their adopted homes, his fans in Dallas or Washington behave like most American teenagers would, say, at a JLo or a Britney Spears concert. Their passion for celebrities is boldly articulated. Though nris may have settled abroad and may never return permanently to their motherland, their connection to Hindi cinema seems to have increased with time despite the distance or other cultural influences. This intense involvement with Hindi movie stars, for example, is the sort that goes well beyond the love for the movies themselves. SRK now attracts not only the following of a popular actor, but also the appeal of an American rock or sports star. He has clearly become an adored icon. Paul Aponte, SRK's personal security, comments, "If a fan sees Brad Pitt on the street, it's like, they wave and say coolly, 'Hi, Brad,' but if a SRK fan spots him, they go absolutely nuts. It's almost like religious fanaticism, it's quite different."

And we did get a glimpse of the many sides of this charismatic star. His alertness to a bigger reality beyond his stardom was to us the most endearing and refreshing thing about him.This was evident in his remark on the long security searches we all, including SRK, had to endure at every US airport. He casually said, "It has something to do with my surname." We were also intrigued to see how unruffled SRK appeared amidst the exploding storms and mess-ups that are part and parcel of big shows and an exhausting schedule. We asked him why there were no star tantrums or glamorous sulks to witness, and how did he manage to nearly always be in a good mood. He explained, "Very clearly, there now has to be a public face. And that public face is always smiling. I am tired and sometimes I am in a bad mood. But I cannot pass that on to people, it is just not fair."

SRK is unpredictable, sensitive, complex and imaginative. But his overriding virtue is his plain speaking. When asked how his stardom impacted on him, we expected a typically pat "star" reply on the lines of "It has not changed me...I am humbled by the love of people etc". But no, SRK, shooting straight from the hip said, "I'm very clear about loving stardom. I love people loving me. If I'm not going to be in that situation, I'll just be with myself. I will not be able to come out of the four walls of my house."

As we were heading back to London, we knew somehow that it was important we had filmed those shows, those crowds, and the unrepeatable moments with SRK. So little of Indian cinema has been archived. And perhaps many years down the line when The Outer World of Shah Rukh Khan is seen, his popularity will be talked of as something akin to Beatlemania. On a personal level, when we said our goodbyes, we couldn't help but feel a bit dejected. Like all special experiences, our journey with Shah Rukh Khan had come to an end and we knew we'd miss him.

Into A Blind Left Corner