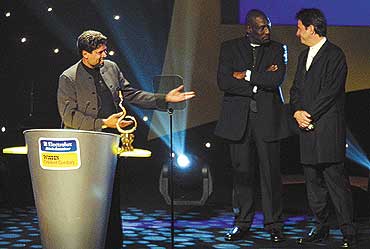 outlookindia.com
-0001-11-30T00:00:00+0553
It was about nine in the evening on July 23, but the English sun didn't set on the Wembley Conference Centre, because a good part of its job is to be metaphorical. A new innings was unfolding in the half-empty auditorium where some displaced Indians had bought £25 tickets to go and find out who exactly was the greatest Indian cricketer of the 20th century, according to the elite jury Wisden magazine had assembled. It was a show that nobody could walk away from. Certainly not if one was in the G row at the two ends of which were sitting two large black men who make a throne out of any blue cushion they sit on. If you wanted to exit through the left of the row, you had to say, "excuse me Sir Clive Lloyd", and if you wanted to get out through the right, "excuse me Sir Viv Richards". So you stayed put, and watched.

But King Richards had to get up for a while to take what had already been a somewhat misty-eyed evening to greater poignancy. He walked towards the hosts of the evening, Mark Nicholas who can read and write, and Diana Hayden whose conditioned hair blanketed her left eye for most of the evening, leaving it to the right to look carefully at the distant tele-prompter. Viv Richards opened the final sealed envelope of the night to tell the world who the Electrolux Kelvinator Wisden Indian Cricketer of the Century was. "Kapil Dev".

And he said more. Words that were not minced because they were left for others to chew on. 'Good actor' had been some people's reaction to Kapil Dev's lachrymose interview with Karan Thapar not very long ago. And Sir Viv said, if this man was accused of all that they said he did, "and still wore such passion on his sleeve every time he came out to play for his country, then he has to be the world's greatest actor". It was not a slap on the faces of people who believed Kapil Dev had sinned. It was a tight-fisted blow from a forearm that has ruined more bowling careers than a good journalist can hope to.

So, when Kapil hugged the trophy, the stage was already set for an unopposed burial of one of the greatest news stories of free India. Despite the best efforts of "some people to ruin me", he said, the third umpire up above had given him the benefit of doubt. He didn't use the word 'vindication'. He even denied later that it was a vindication. Perhaps it's a long word that Kapil has not cared to look up, but that was exactly what the whole thing was about. Vindication. Purging.

It was like an undertrial being sent home with a chit from a people's court: "Sorry about all that happened. It was a mistake. It was all a mistake." After the cleansing came the canonising. He was freely hugged by white men in tuxedos, in the Long Room at the Lord's where they said grace to the lord after paying £1,150 for a seat, asking him to bless every batsman, every keeper, every fielder, "and those fortunate men who can bowl fast". Mike Gatting at table three whispered about a famous cricket official from India who was not liked very much in this room because "he lined his own pocket". But no such hushed tones about Kapil. There may have been no standing ovation in the Long Room but every man filled his champagne glass when Kapil went around with a tilted bottle.

Earlier on the awards night, during the acceptance speech, Kapil's face contorted many times as he spoke about how much this award meant to him. Muscles moved uncontrollably to stop some inner tear-well from exploding. Somewhere inside everybody's throats was a familiar lump. And then he unexpectedly uttered a word that suddenly turned off the tap of noise in the auditorium. "Azharuddin".

Six of the 16 nominees shortlisted for the award had already walked back to the pavilion of life. Forever, in heaven's shower. Nine out of those 10 alive were present on the stage.Bishen Singh Bedi, Bhagwat Chandrasekhar, Sunil Gavaskar, Anil Kumble, Mansur Ali Khan Pataudi, Sachin Tendulkar, Dilip Vengsarkar and Gundappa Vishwanath. Mohammed Azharuddin alone was not around that night. A top Wisden official confirmed: "He was sent an invite but we didn't want to pay his air fare because we didn't want him to come. His presence may have upset a few cricketers and we didn't want trouble." On the stage, on a big television event, Kapil said: "He should have been here. He was one of the finest cricketers India has ever produced."

It was as though just when the spectacular burial of world cricket's dirtiest moment was being conducted with such elegance, the grave-digger himself announced that one skeleton was missing. He didn't have to bring the fact to anybody's notice. But he did. "Azharuddin should have been here," Kapil said, pointing with his left hand to where the nominees were sitting.

After a moment's hush came the applause. All the men on the stage clapped. Some of them didn't have a choice. Everybody was looking. Though there were a few cricketers who didn't believe that Azhar deserved to be there, sitting beside them in his Versace suit, there were many who agreed with Kapil. Vishwanath, a straight man with a no-nonsense language, says: "I really don't know what the reason was behind Azharuddin's absence but I know that he deserved to be there."

It was not just a moment of graciousness on the stage from Kapil for he was willing to stretch it when he spoke to Outlook later, sitting in a hotel's business centre, like a man who has nothing to prove ever again. "Who is Manoj Prabhakar? Who is this M.K. Gupta? Who is John? Why do we trust men who have two names more than one of the greatest captains Indian cricket has ever seen? Why did the media crucify Azhar?"

Each of the 35 jury members, which included names like Richie Benaud, Imran Khan, Nasser Hussain and Madhavrao Scindia (who gave in his list four days before his death), sent in the names of their top five cricketers. The first cricketer in each list got two points and the rest got one point each. The names given by the jury were sealed and put in a locker in the Hongkong Shanghai Banking Corporation's Fort branch. The key was in Wisden's Mumbai office. A few days before the event, the lists were collated by celebrated cricket writer and former Wisden editor Mathew Engel, who gave the names of the top three in the fray to the magazine. What if Azhar was one of them? He was only sent a nominal invite with a clear hint that he was not welcome. Kapil himself says: "They didn't want to fly down Azhar."

But he was never in contention. Everybody who cares to whisper knew that out of the 16 fine men, the fight was only between Kapil Dev Ramlal Nikhanj, Sunil Manohar Gavaskar and Sachin Ramesh Tendulkar. Says a Wisden official: "We paid the three an appearance fee. All the other nominees and jury members were given a few hundred dollars of allowance for their stay here but those three were given an amount so that we could be sure that they will be present. Listen, at the end of the day we didn't have a show if the winner didn't turn up and some cousin came to collect the award."

Gavaskar and Sachin too won awards that night. Gavaskar for captaining the best Indian team of the century, the side of 1985 that transformed India from being of statistical necessity, to a major cricketing powerhouse. And Tendulkar, to nobody's surprise, won the people's choice. There were other awards too. V.V.S. Laxman for his historic knock against Australia. Vishwanath won the Spirit of Cricket award for being a nice man. In a sport where batsmen walk only when their car breaks down, Vishwanath was a man who walked even if the umpire hadn't heard that nick.Chandrasekhar won for the best bowling performance of the century. But needless to say, more than anything, it was a night that the Bible wrongly called Judgement Day. At the end of it, it left Kapil the happiest man in that London zone. In the opinion of sports journalist Ayaz Memon, who was part of the jury, "Gavaskar and Sachin lost out because Kapil had the advantage of being an all-rounder, and he had the ability to single-handedly turn a match on its head."

If the award had gone to either of the other two men, says Kapil, "it wouldn't have made a difference to me. Nobody can say that they didn't deserve it. There has not been a greater strategist thinker of the game than Gavaskar. We had differences during our playing days but that doesn't mean we were bitter foes. We were two strong individuals who sometimes had conflicting ideas. Our relationship was always misunderstood but it is more mature now. And Sachin is sheer talent. Nobody needs to say that. Everybody knows he is a genius. But I feel he doesn't enjoy his game anymore the way he used to before. He carries the entire nation on his shoulder. He should get back to those days when he just went out there and had a good time".

What could be that one quality that made him beat people like Gavaskar and Sachin and many great dead men who had the advantage of being history? "Perhaps the way I played the game. I came from a small town where nobody was keen on cricket. I could play almost any sport. I chose cricket. The way I was, I played to win."

Kapil says he has many people to thank for this day when he was hailed as the greatest ever. He thanks the players who caught off his bowling, who fielded, who captained him, who stood by him. But in every man's life, when played in rewind, there is another list. The people who have to be said sorry to. People who deserve an apology for actions done and not done. Kapil looks calmly at nothing in particular when asked for this list. "I may have offended many people in my career but that's because you can't keep everybody happy. It happens. Sometimes you hurt people. But I can only say that it's natural." No regrets, is what he says as he looks fondly at his wife who is finding it extremely difficult to strap on a huge watch. He fixes the problem and looks at his little daughter. "She is not walking properly. Something is wrong with her shoes." He turns back towards me. "As a father, I tell my daughter how to do things right. That's what I used to do as a captain. It could be misinterpreted sometimes."

Kapil speaks extensively about the game now. That's one significant change in him after bagging the award. "There was a lot of bitterness. Now it has gone away. I asked myself when newspapers and magazines were blowing up the issue: Did I waste my life? Did I deserve all this that was being said about me?" But in the middle of it, he prayed to God, "Give Manoj Prabhakar some brains". One is not sure about God's distribution of such matter, but Kapil agrees that the Maker "has certainly been very kind to me by letting me win this award as compensation for all that I went through in the last two years".

The ghost of match-fixing has been laid to rest. Even though ghosts don't die.