The unputdownable actor turns 81 on September 26. Guess how he is celebrating. By announcing yet another new film. 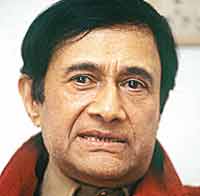 What happened to Beauty Queen which you had announced as your next film and for which you had even started auditioning upcoming actresses?
You know this subject came to me suddenly and I was so charged that I kept Beauty Queen on hold though I had already chosen a girl for it.

Who plays the lead role in Mr Prime Minister?
I do, who else? Tell me, who else have you seen since 1947?

Why Mr Prime Minister?
It was the 2004 elections that triggered off the idea in my mind.

So have you written the script now, after the elections were over?
Yes, in 30 days.

Have you started shooting?
Yes, I am half-way through already.

You are shooting it in Gujarat?
The story takes place in an earthquake-ridden area in a small town.

Who else is in the cast?
There's Boman Irani, and Tara Sharma.

Who is the music director?
There's only one song—and one dance—and a straight story of 2 hours 5 minutes.

What will be the usp of the film?
You know, every Indian is interested in politics and has something to do with it. It's really about that.