Ever found yourself sputtering in trying to name five Indian canine pedigrees? Encounter these near-extinct breeds and update your knowledge of these canis familiaris in Indes. 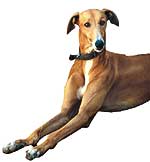 Rampur: Fast, ferocious and a favourite of the Rampur nawabs. One breed weakness, unable to turn at high speeds, these hounds often sustain leg injuries.

Mudhol: A Maratha hound, smaller than the English Greyhound but larger than a Whippet. A good place to source these sleek hunters: Southern Karnataka.

Rajapalayam: Southern special. This white sight hound with a pink nose appeared on the flag of Rajapalayam in Tamil Nadu. Also called a miniature Great Dane.

Banjara: This lithe wanderer, a companion to nomads, maintained its pure lines for the longest time while minding the flock and the camp and helping in meat-getting. 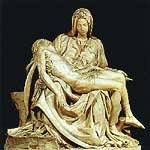 What Marble sculpture of body of Jesus in his mother Mary’s arms, at St Peter’s Basilica, Rome.

Oddities The figures are out of proportion. If Christ is human scale, the Virgin would be nearly five metres tall. Also the only sculpture signed by Michelangelo (on Mary’s sash).

Vandalism Damaged in 1972 by Lazlo Toth, who broke its nose and other parts, while shouting "I am Jesus Christ."

So you thought you knew all about
Arundhati Roy 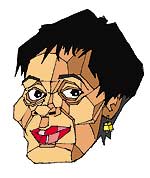 The book ‘An Ordinary Person’s Guide to the Empire’ has our resident Booker winner back in the news. Spot the error here.

A. Didn’t attend formal school till she was 10; studying in Corpus Christie, a home school run by her mom.

B. As a teenager, she made a living selling empty beer bottles.

F. She won a Supreme Court case granting Christian women in Kerala the right to their parents’ property.

Answer F. It was her mother Mary Roy who fought the case.

Adventure sport that’s created the clan of the modern cavemen. Amateur sportspersons who walk and climb into all the earth’s grottos. Not to be confused with cavers, who consider themselves pros in the game. The emerging destination in India for spelunkers and cavers: Meghalaya. Get there before the miners.