Goldfinger
James Bond flicks got slicker, but rarely better. Good filmmaking, not just a mix of a kinkily sadistic gold smuggler who’s willing to nuke Fort Knox and castration by laser. Not to mention, a heroine named Pussy Galore.

Kiss Me Deadly
It’s not often that noir and nuclear go together. Robert Aldrich pulled it off in spades in 1955 with his take on a Mickey Spillane novel. Badass private eye and nasty crooks in pursuit of a mysterious, well, bomb.

The Sacrifice
Luckily Andrei Tarkovsky survived cancer long enough to make this classic. Defies simple summary. Let’s just say it’s about more than just a family gathering and that ongoing nuclear war is a ‘character’ that informs what you’re seeing.

Dr. Strangelove
Teaming Stanley Kubrick with Peter Sellers may seem an unlikely marriage of genius. But how else could one have made a hysterical masterpiece that rings so frighteningly true?

The God Of Small Things Arundhati Roy
Plot Twins Esther and Rahel hurtle inevitably and agonisingly towards losing their innocence. "They all tampered with the laws that lay down who should be loved and how. And how much."

Why Read it for the Big Themes: Love, Madness...in a Language That Breaks All Rules: "...the coconut trees were sea anemones waving their tentacles, hoping to trap and eat an unsuspecting cloud."

So you thought you knew all about 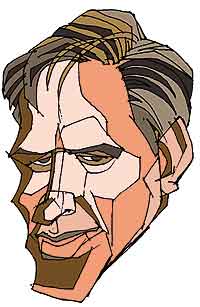 Bryan Adams
The sugar-daddy of pop-rock is here. The wrong chord in his 20-year career?

B. Acting debut in the 1988 Clint Eastwood movie ‘Pink Cadillac’.

D. Is an amateur photographer with two published photo books to his credit.

E. Has been nominated thrice for the Oscars in the Music category.

Answer C. Not Chinese, but Indian food, especially aloo-gobi, is a turn-on.

Part of the legendary Toyota Production System, Jidoka is translated as Autonomation or autonomous operation. It means adding an element of human judgement to automated equipment to make it more reliable and quality-conscious.

Plumb In The Middle