NASA’s current Rover mission to the Red Planet is the 32nd attempt to probe Mars. Sixteen of them have failed. Here are some significant missions to probe the Red Planet.

Mariner 4
After an eight-month voyage, on July 14, 1965, became the first spacecraft to get close-up photographs.Showed lunar-type impact craters, some of them touched with frost.

Viking 1
The first ship to land on Mars, it touched down on the western slope of Plains of Gold on July 20, 1976. Found enigmatic soil chemical activity, but no clear evidence of life.

Mars Global Voyager
First successful mission in two decades. Entered orbit on Sept 12, ’97. Has returned more data about the red planet than all other missions put together.

2001 Mars Odyssey
An orbiting spacecraft is trying to identify minerals present on Mars, how much water, amount of radiation in the environment to help assess risks to future human explorers.

Culture Vulture
Winnie The Pooh A. A. Milne

What The innocent adventures of Winnie the Pooh-bear, Christopher Robin, and friends like Eeyore, Tigger and Piglet in the 100-Acre Wood.

Why Quite simply the most delightful children’s books (three of them) for adults. If you are the philosophical type, ponder the meaning of sentences like "Pooh wondered where everyone else was, and what it felt like to be someone else." Or just have great fun.

So you thought you knew all about
Norah Jones 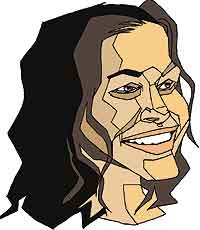 Ravi Shankar’s Brooklyn-based chanteuse-daughter may end up being more famous than pa. Pick the wrong note in her bio.

A. Growing up in Dallas, Texas, she started piano lessons at 7. And played her first gig on her 16th birthday at a local coffeehouse.

B. Sold 2.6 mn copies of her debut album, ‘Come Away with Me’, a rare feat for a Blue Note recording artiste.

E. Has a Grammy nomination this year too, for duet with Willie Nelson.