Sex: The Ancient Wisdom; Culture Vulture: Midnight's Children by Salman Rushdie; So you thought you knew all about Arundhati Roy?

Kamasutra of Vatsyayana
The world’s most famous sex manual. It has been variously dated from 300 BC to 400 AD. Can also serve as a how-to guide for contortionists.

Ananga Ranga of Kalyan Mall
This 12th century text aims to prevent marital break-up due to "the want of varied pleasures, and monotony".

The Love Books of Ovid
Advice from BC-AD-straddling Roman poet for both men and women on seduction. Sample advice to women: "Make sure he thinks he satisfied you."

The Tao of ancient China
Ancient Chinese Tao texts also cover sexology, or "skill in the room". Sexual health and tips for better pleasure. The orgasm is called "the great typhoon".

Hero is born at midnight of August 15, 1947, and his life is a metaphor for India’s post-colonial journey.

Read If you like wordplay, imagery, surrealism, Gunter Grass, Marquez.

Avoid If you dislike elaborate descriptions of spittoons and pickles.

So you thought you knew all about
Arundhati Roy 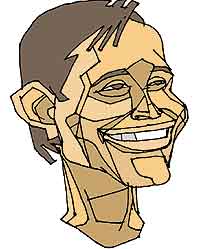 This goddess of small things was back in news at WSF. What below is amiss about her?

A. Suzanna Arundhati Roy was born to a Malayali Christian mother and a Bengali Hindu father.

B. She left home at 16 and made a living selling empty beer bottles.

C. Her husband Pradeep Kishen saw her cycling around and offered her a role in Massey Sahib.

D. She wrote the script for In Which Annie Gives It Those Ones, on her student days.

E. She studied law briefly before joining the National Institute of Urban Affairs.

Answer: E. She studied architecture at the Delhi School of Planning and Architecture

Not Japanese fast food. It’s a creamy painting medium used in ancient Egypt, Greece and China, in which the pigment is mixed with water-soluble materials like fresh egg yolk. Great artists who have used tempera include Da Vinci, Gaugin and Picasso.